The Cato Institute honored Cuba’s Las Damas de Blanco (Ladies in White) at its biennial Milton Friedman Prize dinner in New York in May. Some 400 people gathered for the evening at Cipriani 42nd Street. The historic venue, originally built to house the Bowery Savings Bank in 1921, features towering Renaissance‐​style columns and mosaics — the 1928 Architectural Forum described the building as “a castle in the clouds brought to earth.” 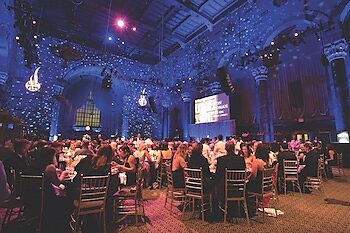 The keynote speaker for the evening was Brazil’s celebrated federal judge, Sérgio Moro. Moro has become a household name in his country thanks to Operation Car Wash, the massive scandal that has sent some of Brazil’s most powerful politicians and business elite — including former president Luiz Inácio Lula da Silva — to jail for corruption.

Operation Car Wash began in 2014, originally as an investigation into a small car wash that served as a money-laundering facility. It ended up uncovering a bribe that had been accepted by a top executive at the government-controlled oil company Petrobras — and from there, investigators began toppling a massive network of corruption involving hundreds of people, including politicians from the ruling and opposition parties, and billions of dollars in bribes, often using public funds.

Moro, who has presided over some of the biggest cases in the scandal, is credited with changing the way corruption cases are tried in Brazil, refusing to offer the wealthy and politically connected special treatment. As Brazilians have marched in the streets, calling for the impeachment or prosecution of sitting or former presidents, they have worn masks of Moro’s face and carried banners emblazoned with his name.

Moro was interviewed by Mary Anastasia O’Grady, the award-winning Americas columnist for the Wall Street Journal. O’Grady characterized Operation Car Wash as “a truth way stranger than fiction, in a country that is enormously important for the region,” adding that “the changes that Judge Moro has brought about have big implications for the rest of Latin America.” Moro expressed hope that the “culture of graft” in his country — and all of Latin America — may be on the brink of change, as more and more people demand equality under the law. “It’s all about the rule of law,” said Moro. “The past impunity in Brazil made a lot of Brazilians believe that [corruption] was a kind of natural fate, or tropical disease — but it’s just cultural weakness. And in a democracy, you can change that.”

Cuban human rights activist Rosa María Payá, the president of the Latin American Youth Network for Democracy, gave a moving introduction to the Ladies in White, crediting the group’s peaceful demonstrations with restoring hope to the Cuban people — including her own family. Payá’s father, Oswaldo Payá, was also a well-known activist who died under suspicious circumstances after years of intimidation from the Castro regime. “When the Castro brothers finally killed my father six years ago, these women made a human chain around his coffin to protect his dead body from the repressors,” said Payá. “The dictatorship doesn’t even allow them to get to Mass each Sunday, and these women face beatings, jail, and harassment — but they keep trying, Sunday after Sunday.”

Finally, the three members of the Ladies in White who were able to attend the dinner took the stage: cofounders Blanca Reyes and Dolia Leal, and Lourdes Esquivel. The Cuban government blocked the departure of several other members of the group, including leader Berta Soler. Soler addressed the crowd via a prerecorded video (see page 9), and Reyes expressed the group’s “gratitude, joy, and excitement” for the award, which they dedicated to the memory of their founder Laura Pollán and to all Cuban political prisoners.