Congressional staff members play a vital role in shaping policy — they make decisions on which issues their bosses prioritize, which arguments the representatives and senators hear, and what language makes it into legislation. Cato’s popular Capitol Hill Briefings offer these staff members timely briefings on the most pressing issues facing their offices. At these events, Cato scholars and other experts update the staff on their latest scholarship and policy recommendations, critique current or upcoming legislation, and answer staffers’ questions. 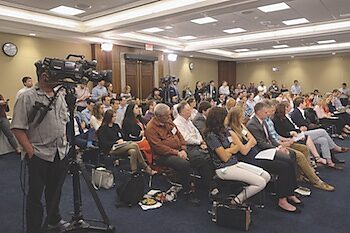 In May, for example, as Congress debated a major farm bill that would have reauthorized farm programs and food stamps to the tune of $867 billion over the next 10 years, Cato’s Chris Edwards briefed congressional staff members on reforming the farm bill. Edwards, along with Daren Bakst of the Heritage Foundation and Scott Faber of the Environmental Working Group, explained how the bill’s massive subsidies would serve to enrich already well‐​off industries at the expense of taxpayers and outlined commonsense reforms that would improve the bill. That same month, as Congress considered several options for replacing the 2001 Authorization for the Use of Military Force (AUMF), Cato’s Gene Healy and John Glaser explained the serious problems with these proposed replacement AUMFs and urged Congress to repeal, rather than replace, the AUMF. (See more on page 11.)

Other Hill events in recent months have covered the risky role of arms sales in foreign policy, how to improve the legal immigration system in a way that makes sense for American workers and businesses, what Congress should prioritize when it tackles welfare reform, and more.

Just before Congress passed the largest tax overhaul in decades this past winter, Cato’s multiple in‐​depth briefings on tax policy were shown repeatedly on C-SPAN during the lead‐​up to the vote. As Rep. Justin Amash (R-MI) declared last year during the Capitol Hill launch of the latest Cato Handbook for Policymakers, “Any time something comes up in Washington where I have a question about what libertarian policymakers might want to consider, I look to Cato Institute scholars.”

View archived video of past Capitol Hill briefings at Cato​.org.