NO MORE THAN A QUARTER OF THEIR TIME

President Trump moved Friday to roll back civil-service protections ... curtailing time employees can be paid for union work. ... The orders limit federal employees to spending no more than a quarter of their workday on “official time” — paid time to do union business.
— Washington Post, May 25, 2018 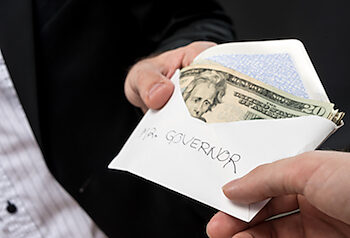 THIS IS A BETTER INVESTMENT THAN AMAZON
The US Attorney’s Office in Manhattan has launched a probe into an upstate health care company that received over $25 million in state grants after making significant campaign contributions to Gov. Andrew Cuomo, sources familiar with the investigation told The Post. ...

In addition to the company itself, a number of Crystal Run executives, doctors and their spouses have contributed at least $400,000 in funds to the Cuomo campaign.
— New York Post, May 14, 2018

TAXES AND REGULATIONS SQUEEZE OUT SMALL BUSINESSES, BOLSTER BLACK MARKET
Ask the people who grow, manufacture, and sell cannabis about the end of prohibition and you’ll hear two stories. One is... thousands of new jobs, millions in new tax revenue, and a drop in crime and incarceration.

But increasingly you’ll hear another story. ... The new state and city cannabis regulations are too complicated, permits are too difficult and time consuming to obtain, taxes are too high, and commercial real estate is scarce and expensive. As a result, many longtime cannabis entrepreneurs are either giving up or they’re burrowing back into the underground economy, out of the taxman’s reach, and unfortunately, further away from the social benefits legal pot was supposed to deliver. ...

Some longtime farmers, daunted by the regulated market’s heavy expenses, taxes, and low-profit predictions, have shrugged and gone back to the black market where they can continue to grow as they always have: illegally but free of hassle from the state’s new pot bureaucrats armed with pocket protectors and clipboards.
— East Bay Express, April 18, 2018

For more than three years, Trump has fumed publicly and privately about the giant commerce and services company and its founder Jeffrey P. Bezos, who is also the owner of The Washington Post. ...

Some administration officials say several of Trump’s attacks aimed at Amazon have come in response to articles in The Post that he didn’t like. ...

Brennan and Trump have met at the White House about the matter several times, beginning in 2017.
— Washington Post, May 18, 2018

ALSO, CALIFORNIA IS VERY CONCERNED ABOUT THE LACK OF AFFORDABLE HOUSING
The latest California rules are expected to make a single-family house $9,500 more expensive to build on average.
— Los Angeles Times, May 8, 2018

GOVERNMENT DATA COLLECTION: NOTHING TO WORRY ABOUT
Information from the 1940 Census was secretly used in one of the worst violations of constitutional rights in U.S. history: the internment of Japanese Americans during World War II.
— Washington Post, April 6, 2018

IT’S ALMOST LIKE POLITICIANS BUY VOTES WITH TAXPAYERS’ MONEY
Government food boxes are a lifeline for the hungry. Critics accuse the government of manipulating Venezuelans by threatening to take away rations if they don’t vote or show up at rallies. ...

Sometimes, people get surprise text messages from the government telling them they will get cash bonuses, often on holidays. For poor citizens, it can be equivalent to several weeks wages. That’s enough to convince many to vote for Mr. Maduro.
— New York Times, May 20, 2018