YOUR UBER AMBULANCE HAS ARRIVED 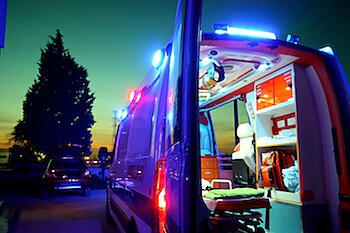 Ambulances are notoriously expensive — one ride may cost more than $1,000, and insurance companies frequently refuse to cover them. In the past, patients had few alternatives to get themselves to the hospital — but in “Does Ride-Sharing Substitute for Ambulances?” (Research Briefs in Economic Policy no. 114), Leon S. Moskatel of Scripps Mercy Hospital and David J. G. Slusky of the University of Kansas demonstrate how the age of Uber and Lyft is changing that and is reducing expensive and unnecessary ambulance trips.

DIVORCE LAWS AND PROSTITUTION
Should those who want to ban prostitution instead be focusing on increasing access to divorce? In “The Effect of Unilateral Divorce on Prostitution: Evidence from Divorce Laws in U.S. States” (Research Briefs in Economic Policy no. 111), Riccardo Ciacci of the European University Institute finds that unilateral divorce laws reduce arrests for female prostitution. The best explanation for this phenomenon, according to Ciacci, is that unilateral divorce increases the attractiveness of marriage to women by improving wives’ conditions in marriage — thereby increasing the opportunity cost of prostitution and reducing its supply.

LEASH THE DRONES
Instead of building a physical wall on the border, some believe that President Trump should build a virtual wall of surveillance, primarily through the use of drones. In “Drones on the Border: Efficacy and Privacy Implications” (Immigration Research and Policy Brief no. 5), Cato’s David Bier and Matthew Feeney argue that this would endanger Americans’ privacy and ultimately prove ineffective — the drones currently in use by U.S. Customs and Border Protection have led to only 0.5 percent of apprehensions at a cost of $32,000 per arrest.

THE SUGAR CARTEL
For decades the federal government has controlled the production and importation of sugar, keeping prices artificially higher than those in international markets. In “Candy Coated Cartel: Time to Kill the U.S. Sugar Program” (Policy Analysis no. 837), Cato’s Colin Grabow debunks various arguments used to justify the continued existence of the sugar program and argues that this price inflation harms both U.S. consumers and businesses.

TAXES INCREASE INEQUALITY
Taxation is often held up as a means of reducing income inequality — but is that how it works in practice? In “Do Taxes Increase Economic Inequality? A Comparative Study Based on the State Personal Income Tax” (Research Briefs in Economic Policy no. 107), Ugo Troiano of the University of Michigan finds that, in fact, income taxes significantly increased states’ economic inequality.

THE END OF THE WTO?
With countries turning away from free trade, could we be approaching the beginning of the end for the World Trade Organization (WTO)? In “Was Buenos Aires the Beginning of the End or the End of the Beginning? The Future of the World Trade Organization” (Policy Analysis no. 841), Cato adjunct scholar and former chairman of the Appellate Body of the WTO James Bacchus assesses the state of the WTO and future prospects for multilateral and plurilateral deals.

THE INEFFECTIVE ACA
In “Early Effects of the Affordable Care Act on Health Care Access, Risky Health Behaviors, and Self-Assessed Health” (Research Briefs in Economic Policy no. 108), Charles Courtemanche and James Marton of Georgia State University, Benjamin Ukert of the University of Pennsylvania, Aaron Yelowitz of the University of Kentucky, and Daniela Zapata of IMPAQ International find that the Patient Protection and Affordable Care Act has had little effect on risky behaviors, such as smoking and body mass index, and did not significantly improve self-assessed health, even among lower-income recipients.

DO WE NEED “EXTREME VETTING”?
President Trump claims that we need new “extreme vetting” procedures for immigrants and foreign travelers to avert terrorist threats. But in “Extreme Vetting of Immigrants: Estimating Terrorism Vetting Failures” (Policy Analysis no. 838), Cato’s David Bier provides the first estimate of the number of terrorism vetting failures, both before and after post-9/11 vetting enhancements. He finds that vetting failures are extremely rare and have become even rarer since 9/11.

RENT CONTROL AND HOUSING
As housing prices skyrocket, many state and local lawmakers are considering expanding or enacting rent control laws. In “The Effects of Rent Control Expansion on Tenants, Landlords, and Inequality: Evidence from San Francisco” (Research Briefs in Economic Policy no. 109), Rebecca Diamond, Timothy McQuade, and Franklin Qian of Stanford University study the effects of a 1994 San Francisco ballot initiative that provided rent control for small multifamily housing built before 1980. They find that any benefits to tenants of rent-controlled properties were counterbalanced by landlords reducing the supply of housing in response to the law.

THE TRUTH ABOUT INEQUALITY
Is income inequality in the United States really higher than in other Western countries, as is often claimed? In “Reassessing the Facts about Inequality, Poverty, and Redistribution” (Policy Analysis no. 839), John F. Early, the president of Vital Few, LLC, and former assistant commissioner at the U.S. Bureau of Labor Statistics, shows that the statistics usually invoked for this claim are misleading, because they exclude about $1 trillion in annual transfer payments to lower-income households and do not account for the effects of taxes.

KEEPING THE PEACE WITH NORTH KOREA
President Trump has repeatedly threatened to attack North Korea. In “Avoiding a Korean Calamity: Why Resolving the Dispute with Pyongyang Requires Keeping the Peace” (Policy Analysis no. 840), Cato’s Doug Bandow lays out alternative diplomatic solutions and urges against the possibility of war with North Korea.

ARE PUBLIC SCHOOLS A PUBLIC GOOD?
Could the negative consequences of public schooling outweigh its public benefits? In “Is Public Schooling a Public Good? An Analysis of Schooling Externalities” (Policy Analysis no. 842), Cato’s Corey DeAngelis estimates that public schooling in the United States has a net negative externality of at least $1.3 trillion over students’ lifetime relative to publicly funded universal school vouchers.

MORE POLICE, LESS CRIME?
Does increasing police presence actually reduce crime? In “Police Patrols and Crime” (Research Briefs in Economic Policy no. 112), Jordi Blanes i Vidal of the London School of Economics and Giovanni Mastrobuoni of Collegio Carlo Alberto study an experiment in the United Kingdom that targeted different areas for increased police presence over 19 months — and find no decrease in crime corresponding to the increase in police patrolling.

RESTAURANTS AND MINIMUM WAGE
How does the restaurant industry respond to minimum wage increases over time? In “Industry Dynamics and the Minimum Wage: A Putty-Clay Approach” (Research Briefs in Economic Policy no. 110), Daniel Aaronson of the Federal Reserve Bank of Chicago, Eric French of University College London, Isaac Sorkin of Stanford University, and Ted To develop a “putty-clay model” where new restaurants can choose how mechanized their production will be, but once open, they cannot change the way they make their products. The authors use this model to explain why the disemployment effect of the minimum wage hike grows over time, as the more labor-intensive restaurants are slowly replaced.

IMMIGRANTS’ WELFARE USE
In “Immigration and the Welfare State: Immigrant and Native Use Rates and Benefit Levels for Means-Tested Welfare and Entitlement Programs” (Immigration Research and Policy Brief no. 6), Cato’s Alex Nowrasteh and Robert Orr show that overall, immigrants are less likely to consume welfare benefits and, when they do, they generally consume less than native-born Americans.

“BUY AMERICAN”
President Trump’s anti-trade rhetoric has led to a shocking reversal in Republican attitudes toward free trade — after the 2016 election, Republicans who said that trade agreements had been good for America fell from 56 percent to only 29 percent. In “Political Rhetoric as Trade Barrier: Trump’s ‘Buy American’ Campaign and U.S. Demand for Imports” (Research Briefs in Economic Policy no. 113), Jeffrey Kucik of the University of Arizona and Krzysztof Pelc of McGill University test whether this rhetoric has changed consumers’ market behavior, but they find no perceptible change in trade patterns, such as imports of foreign cars.

DO SAFETY LAWS HELP BIKERS?
As biking gains popularity, a number of states have recently passed minimum distance passing laws that require cars to leave bikers a certain amount of space when passing them. But in “Give Me 3': Do Minimum Distance Passing Laws Reduce Bicyclist Fatalities?” (Research Briefs in Economic Policy no. 115), Cody Nehiba of the University of California, Irvine, finds that these laws are ineffective in reducing bicyclist fatalities.