In November, Cato hosted the special premiere screening of Trump as Destiny: Why a Reality Show President Was Inevitable, a new short documentary created for We the Internet TV by former Cato intern and filmmaker Rob Montz. Gene Healy, vice president of the Cato Institute, hosted the screening and after‐​film discussion. Healy was also interviewed throughout the film, which builds on many of the themes of Healy’s 2008 book The Cult of the Presidency: America’s Dangerous Devotion to Executive Power. 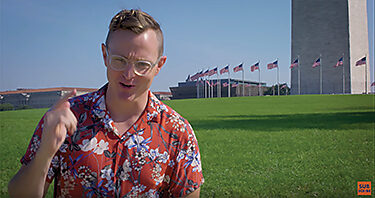 Through this fast‐​paced documentary aimed at young online audiences, Montz lays bare a dynamic that is often an unremarked background assumption of American politics: the messianic, all‐​encompassing obsession with the presidency. As a cultural phenomenon, presidents have placed themselves firmly at the constant center of attention. On policy matters, presidents have usurped vast powers from the legislative and judicial branches. The office has become exactly what the Framers hoped to avoid: an elective monarchy occupied by demagogues with nearly unlimited power.

Presidents of both parties have spent most of the past century holding themselves out as a combination of national entertainment figure and strongman savior. Instead of “characters pre‐​eminent for ability and virtue” as envisioned by Alexander Hamilton in Federalist no. 68, the office has become tailor‐​made for celebrities with dubious qualifications. It was only a matter of time, then, before a pop‐​culture celebrity claimed the office with a focus on the performative aspects of the modern presidency. In this understanding, the current chaotic administration is less of a break from tradition and more of an inevitable culmination of presidential aggrandizement from FDR to Obama.

Cato’s internship program is highly competitive, and interns work closely with policy scholars in their assigned departments. All interns also complete an intensive seminar program covering both professional development and libertarian policy perspectives. Many former Cato interns have gone on to successful careers in public policy advocacy, and the institute is always pleased to showcase the results of its investments in the next generation of liberty advocates.

Trump as Destiny can be found on We The Internet TV’s YouTube Channel, and the discussion with Rob Montz and Gene Healy can be viewed on Cato’s website.