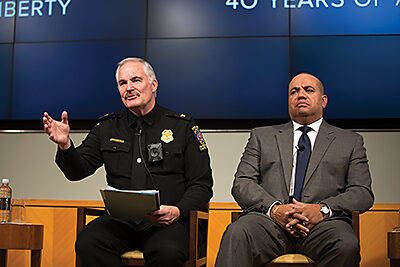 The Future of Criminal Justice Reform

With the election of President Trump and his tough‐​on‐​crime rhetoric, are the days of criminal justice reform over? How should state and local officials tackle difficult issues such as the opioid crisis, overcriminalization and overincarceration, and police misconduct? At a Cato conference, Criminal Justice at a Crossroads, experts gathered to discuss these questions. The day opened with a discussion on law enforcement, in which Ron Davis, formerly a police chief in California, criticized Americans’ tendency to treat police work like a “vocation” instead of a profession with strict rules and systems. As some of the most powerful government employees in the country, he argued, police must have clear goals and evidence‐​based practices. Steven S. Alm, a retired judge from Hawaii, discussed his widely praised Hawaii’s Opportunity Probation with Enforcement program, which operates under the principle that probation punishments should be proportionate, swift, consistent, and not overly harsh. In a moving closing address, Kevin Sharp told the story of why he resigned from his lifetime appointment as a federal judge (see page 9). Other speakers included Alyssa Rosenberg of the Washington Post, William R. Kelly of the University of Texas at Austin, former acting commissioner of U.S. Customs and Border Protection Jay Ahern, and many others. 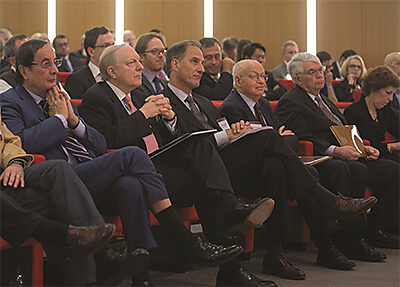 35 Years of Pioneering Monetary Policy
The Cato Institute hosted its 35th Annual Monetary Conference in November, a celebrated gathering of top scholars, policymakers, and journalists, to discuss ideas for the future of monetary policy. Loretta J. Mester, the president and CEO of the Federal Reserve Bank of Cleveland, delivered the keynote address, remarking that the longevity of Cato’s conference “underscores the important contributions that the series has made over the years to the public discourse on monetary economics and policy.” Her speech focused on how coming demographic shifts worldwide will impact economics and monetary policy. Other speakers included some of the most prominent minds in free‐​market monetary policy, such as Stanford economist John B. Taylor, Martin Feldstein of Harvard University, Charles W. Calomiris of Columbia Business School, and former Federal Reserve Board governor Kevin Warsh. Topics included how to move toward a rules‐​based monetary system; how to normalize monetary policy after years of unconventional monetary policy; and the future of currency. Rep. Andy Barr (R-KY), chairman of the House Subcommittee on Monetary Policy and Trade, delivered an address on legislative efforts to reform monetary policy, where he declared that “Over the last 35 years, Cato’s monetary conference has more than earned its status as the place where serious thinkers and doers can test and market ideas for a stronger economic foundation.” 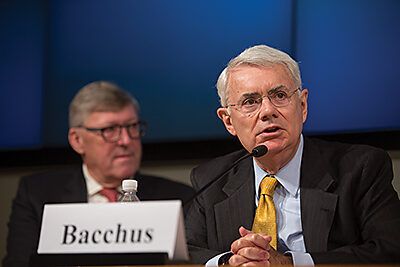 Toward a Freer NAFTA
As the United States, Canada, and Mexico renegotiate the North American Free Trade Agreement (NAFTA), the Cato Institute hosted a conference, Renegotiating NAFTA: Prospects and Challenges, to discuss the history and politics of NAFTA negotiations, and debate what a modern NAFTA should look like. The day opened with a panel reviewing NAFTA’s origin and purpose, moderated by former chairman of the World Trade Organization Appellate Body Jim Bacchus. A following panel debated the merits of NAFTA, with the Mercatus Center’s Dan Griswold maintaining that NAFTA has delivered on its promise of economic benefit — the U.S. auto industry, for example, is thriving, assembling about 12 million cars a year, which is above its 30‐​year average. “Since NAFTA passed, our exports are at a record high, over 2 million — we have created the competitive North American platform that was promised,” he said. Christopher Wilson of the Woodrow Wilson Center agreed, saying that NAFTA allows Americans to focus on their comparative advantage, in higher‐​skilled jobs such as engineering, marketing, and business management, so that America’s economy grows in tandem with NAFTA countries. “When we see growth in Mexico, that’s associated with growth in the United States,” he said. Other panels discussed the politics and reality of renegotiating NAFTA and ideas for modernizing the 1994 agreement for the digital age. 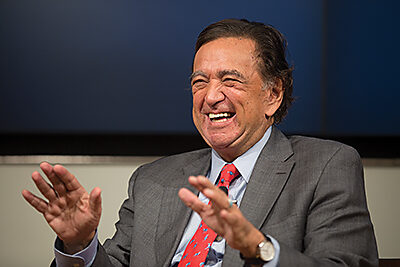 Reckoning with a Nuclear North Korea
As North Korea ramps up its nuclear and missile capabilities, how worried should Americans really be? What are the prospects for negotiations with North Korean leadership? Should America reevaluate its militaristic strategy in this area? At a Cato conference, How Do You Solve a Problem Like North Korea?, experts discussed these questions. For the keynote event, Cato’s Ted Galen Carpenter interviewed Bill Richardson, former New Mexico governor and U.S.–North Korea negotiator. Richardson urged dialogue with North Korea in attempting to freeze its nuclear program, but warned that Americans must be realistic about who they’re facing — North Korean negotiators do not think like other countries’ negotiators, and their ideas of “concessions” do not match up with normal negotiators. Other speakers included Joshua Pollack of The Nonproliferation Review, Michael Auslin of the Hoover Institution, Rajan Menon of the City College of New York, and Suzanne DiMaggio of New America. “One major lesson learned from the Iran talks is yes, diplomacy with an adversary is extremely hard, but it’s not impossible,” said DiMaggio, suggesting that Americans should begin by negotiating a de‐​escalation, since total denuclearization is currently “outside the realm of possibility.”