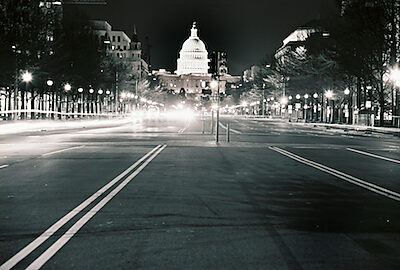 The bankrupt Georgia‐​based solar company Suniva joined forces with Oregon‐​based SolarWorld Americas to petition the U.S. International Trade Commission for relief earlier this year, saying that the U.S. solar industry “simply cannot survive” at a time when foreign imports of solar cells “have unexpectedly exploded and prices have collapsed.”…

The ITC, after considering the petition, ruled 4–0 Friday in favor of the two companies, finding that solar cells “are being imported into the United States in such increased quantities as to be a substantial cause of serious injury to the domestic industry.”
— Washington Post, September 22, 2017

THIS IS WHY PROTECTIONISM HAPPENS
“We have a lot of shippers and a lot of people that work in the shipping industry that don’t want the Jones Act lifted.”
— President Trump, September 27, 2017

LOBBYISTS: THE MEN WHO MAKE THE SWAMP
Last week, Tony Podesta, an eminence in the annals of Washington lobbying, threw one of his signature events, a big birthday bash at his stately stone manse in Kalorama. His guests thought he was on top of his world, one of the men who makes the city go. …

Tony Podesta has been a pivotal figure in the murky connections between policy and politics, becoming wealthy on fees from industries and foreign entities that want something from Congress and the White House. He also bundles big donations and dispenses them to politicians who might someday be helpful to those lobbying clients. …

T]he Podesta Group, representing some of the country’s biggest and most powerful businesses, including Walmart, Bank of America and BP … collected $252 million in fees over the past two decades. …

Along the way, the firm also represented a number of foreign entities, including the government of Egypt under ex‐​dictator Hosni Mubarak.
— Washington Post, October 30, 2017

MAYBE THAT’S A LESSON
“I basically said the United States had invested well over $11 billion in South Sudan and into him and that we were now questioning that investment,” [Nikki] Haley, the tough‐​talking U.N. ambassador, said last week about her one‐​on‐​one discussion with South Sudanese President Salva Kiir.
— Washington Post, October 30, 2017

THE GOVERNMENT DOESN’T LOVE YOU
Those in the neighborhood without flood insurance were able to apply for and receive assistance from FEMA — including the Maddoxes, who recently had $14,000 in federal money land in their checking account. …

“I’m very appreciative to FEMA. I really, really am,” said Mary Maddox, who has been married for more than 50 years and raised five children. “I was just so excited when I saw that they loved us.”
— Washington Post, October 21, 2017

A RUSH TO LEGALIZATION AFTER 94 YEARS
Canada is set to become the first advanced industrialized nation to legalize and regulate marijuana from production to consumption by next July, but increasingly, Canadians are wondering: What’s the hurry?

The government of Prime Minister Justin Trudeau is pressing ahead with legislation to legalize cannabis, a move that a majority of the Canadian public supports. But stakeholders such as police chiefs and psychiatrists are urging caution and even delay, worried that a rush to legalization will encourage consumption among young people and increase the incidence of impaired driving.
— Washington Post, October 5, 2017

IT’S A RISK WE’LL HAVE TO TAKE
Representative John Conyers Jr., the House’s longest‐​serving lawmaker, does not plan to resign over accusations of sexual harassment despite facing a House Ethics Committee investigation, his lawyer said on Wednesday.

THAT’S THE BEST KIND OF DEMOCRACY
The man expected to lead Zimbabwe after the dramatic toppling of longtime president Robert Mugabe returned from abroad on Wednesday, promising democracy but also warning that the ruling party would remain firmly in control.
— Washington Post, November 22, 2017