Donald Trump’s presidency has triggered a growing debate on both sides of the Atlantic about the future of the North Atlantic Treaty Organization (NATO) and U.S. policy regarding the alliance. In NATO: The Dangerous Dinosaur, Ted Galen Carpenter, senior fellow for defense and foreign policy studies at the Cato Institute, outlines how NATO in its current form has outlived its purpose and how burden sharing is only part of the problem. As he explains, continuing to expand NATO eastward, encroaching on Russia, will only endanger the alliance.

Since the fall of the Berlin Wall, NATO has struggled to find its purpose. No longer faced with the existential threat of the Warsaw Pact led by the Soviet Union, the military alliance seemed for a time as if it might fade away peacefully after having served its purpose. 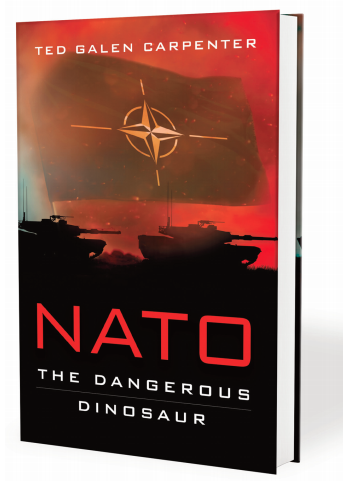 Instead, a fateful decision was made to expand the alliance into eastern Europe. While Donald Trump complains about members’ failure to comply with burden sharing — NATO’s policy to encourage greater defense spending by European members — the real insecurity, according to Carpenter, has been caused by this eastern expansion. The reality is that post‐​Soviet Russia represents a fraction of the threat that the Soviet empire once did and that NATO’s expansion has become provocative and played no small role in the aggressive response of Russian President Vladimir Putin.

In addition to this needless confrontation caused by expanding NATO right up to Russia’s borders, Carpenter points out that U.S. paternalism stifles independent European security capabilities. This is not just a matter of wanting increased European defense spending but rather a crucial lack of policy independence and flexibility for Europe.

From the wars in the former Yugoslavia to the intervention in Libya, European security needs are often dependent on, and thus subordinated to, American interests. Sometimes it isn’t just a matter of European reluctance to have an independent security policy. At times the entanglement is brutally practical, with European militaries lacking crucial infrastructure and support capabilities that have been assigned to America. Other times, this leaves the Europeans unable to mount independent operations if they wanted to, even in their own backyard.

What’s the alternative? The broad alignment of interests between Europe and the United States is not going away. As the world’s leading liberal democracies, bound by a shared culture and history, Europe and America have common interests deeper than any formal treaty or alliance. But the relationship needs the flexibility that comes with genuine independence on both sides of the Atlantic. Both Europe and America can and should have independent capabilities and policies for securing their own defense needs. When the occasion calls for working together, they will still be able to do so. But both sides of the transatlantic partnership would be better served by lessening their entanglement and increasing their capability to act independently.

NATO: The Dangerous Dinosaur is available at booksellers and online retailers nationwide.