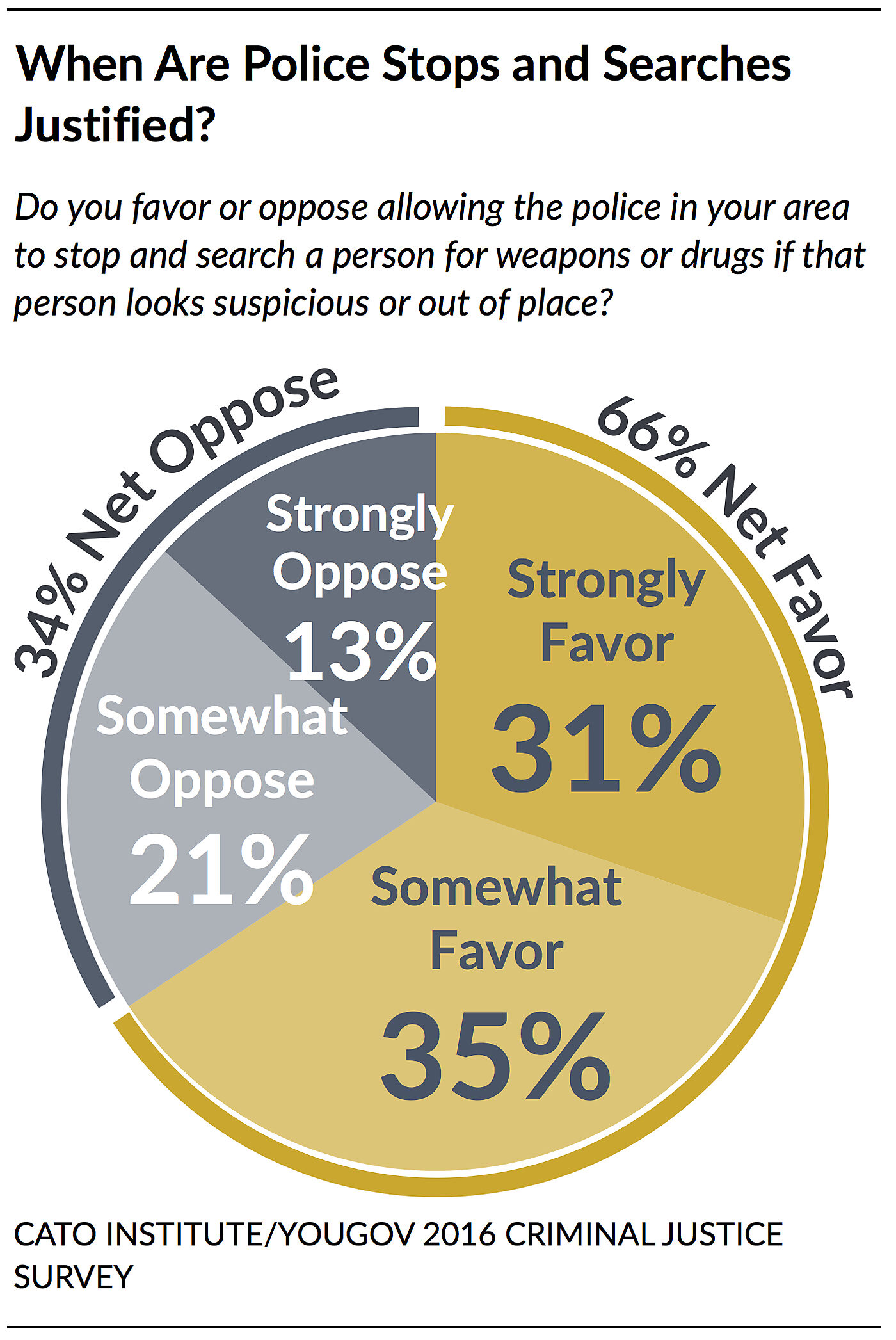 What do Americans believe should give police officers justifiable grounds to stop and search a person? We asked respondents about hypothetical police practices to discern their views about the proper standard to govern police searches. 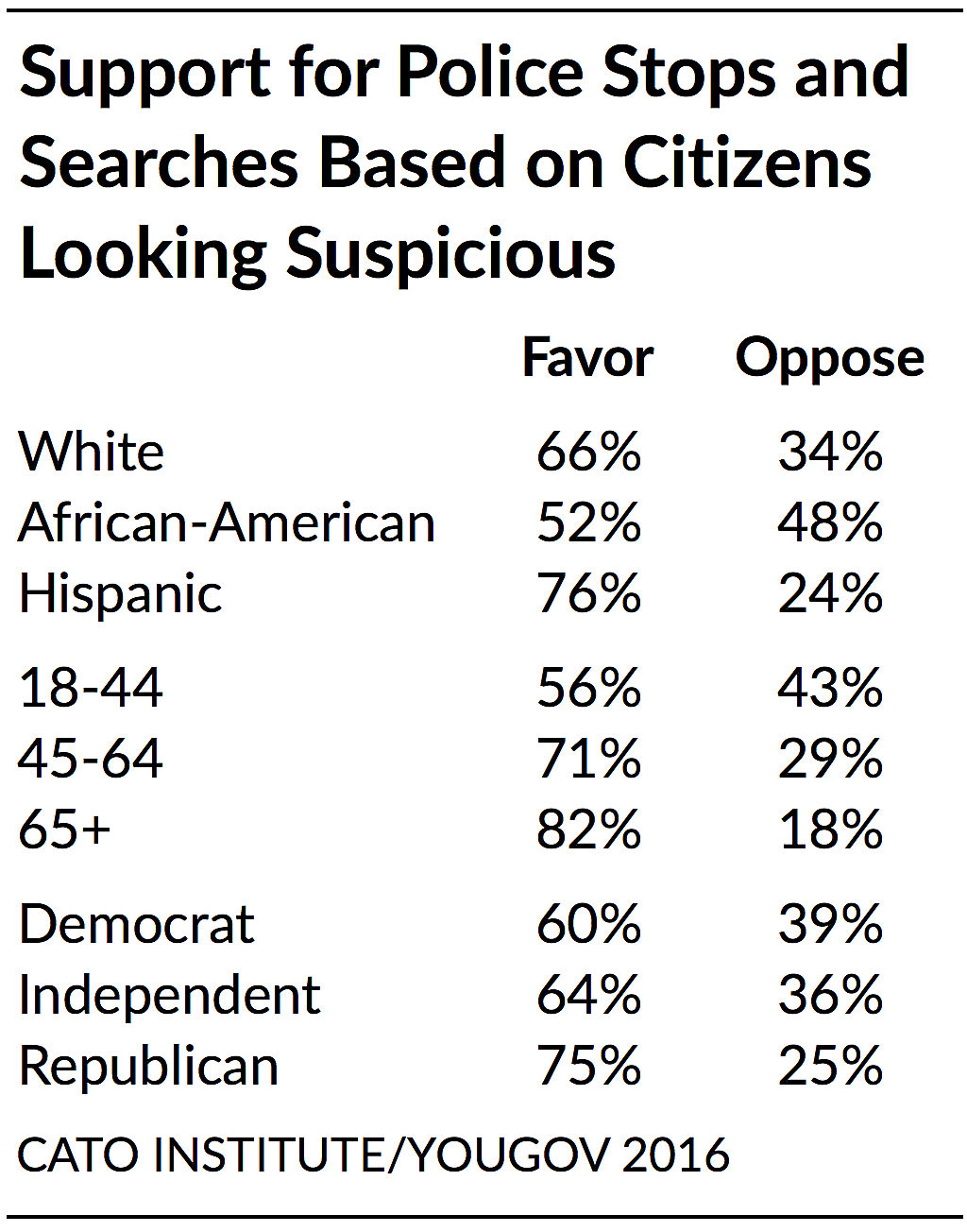 African Americans (52%) are considerably less likely than Hispanics (76%) and Caucasians (66%) to support giving police officers such discretion. Age also matters: Baby Boomers (82%) are most supportive of the described practice and millennials (55%) least.

Republicans (75%) are more likely than Democrats (60%) and independents (64%) to allow police to use their subjective judgment about who looks out of place when deciding whom to stop and search. "Very liberal" respondents stand out as the only political group with a majority (60%) opposed and 40% in favor.

Those who score high (87%) on the Respect for Authority Index (RAI) are 44 points more likely than those who score low (43%) to allow police to stop and search people based on looking suspicious or out of place.89

Americans who have experienced a police search, or know someone who has, are somewhat more skeptical of giving police this kind of autonomy. Nevertheless, majorities with (59%) and without (70%) this experience support such discretion.

The practice described rests, at best, on questionable constitutional grounds. 90 It is somewhat similar to what critics accused the New York Police Department's Stop and Frisk program of doing.91 Critics argued that the NYPD gave officers too much latitude in deciding whom to stop and had violated Americans' Fourth Amendment protections from unreasonable searches and seizures.92

Public support for the described practice is not unconditional. Individuals might oppose it if they were to learn they disagreed with police about what exactly "looks suspicious or out of place." Furthermore, since 63% oppose racial profiling, Americans would oppose police discretion informed by racial bias.

Reformers might consider why many Americans support such ostensibly unconstitutional practices. Many may personally feel uncomfortable around individuals who appear out of place and believe their discomfort should govern police stops. Therefore, reformers might explain the value of Fourth Amendment protections against unreasonable search and seizure. Among audiences who revere the US Constitution, reformers might expound on why the founders implemented these protections.

88 For instance, probable cause may be established if the officer smells marijuana or the officer sees contraband in plain sight. Officers may also ask the person for their consent to search their car even without establishing reasonable suspicion.

90 Police officers are only allowed to stop a person if they have reasonable suspicion that the person has committed or is about to commit a crime. The officer is allowed to search the person for weapons for the safety of the officer. See Terry v. Ohio, No. 67 (United States Supreme Court, 1968).

91 Arthur Garrison points out that "furtive movements" and presence in a high crime area were the two most commonly given reasons in police reports for pedestrian stops between 2004-2009. Furthermore, 78% of all stops between 2004-2009 were initiated by a police officer, not the result of a service call. Since the reasons for these stops were fairly broad, critics argued police had too much latitude in deciding whom to stop and search and this gave way to racial profiling. Arthur H. Garrison, "NYPD Stop and Frisk, Perceptions of Criminals, Race and the Meaning of Terry v. Ohio: A Content Analysis of Floyd, et al. v. City of New York*," Rutgers Race & Law Review 15 (2014): 65-156; Christopher Dunn and Sara LaPlante, "Stop and Frisk 2012 NYCLU Briefing," New York Civil Liberties Union, May 2013, http://www.nyclu.org/files/publications/2012_Report_NYCLU_0.pdf.