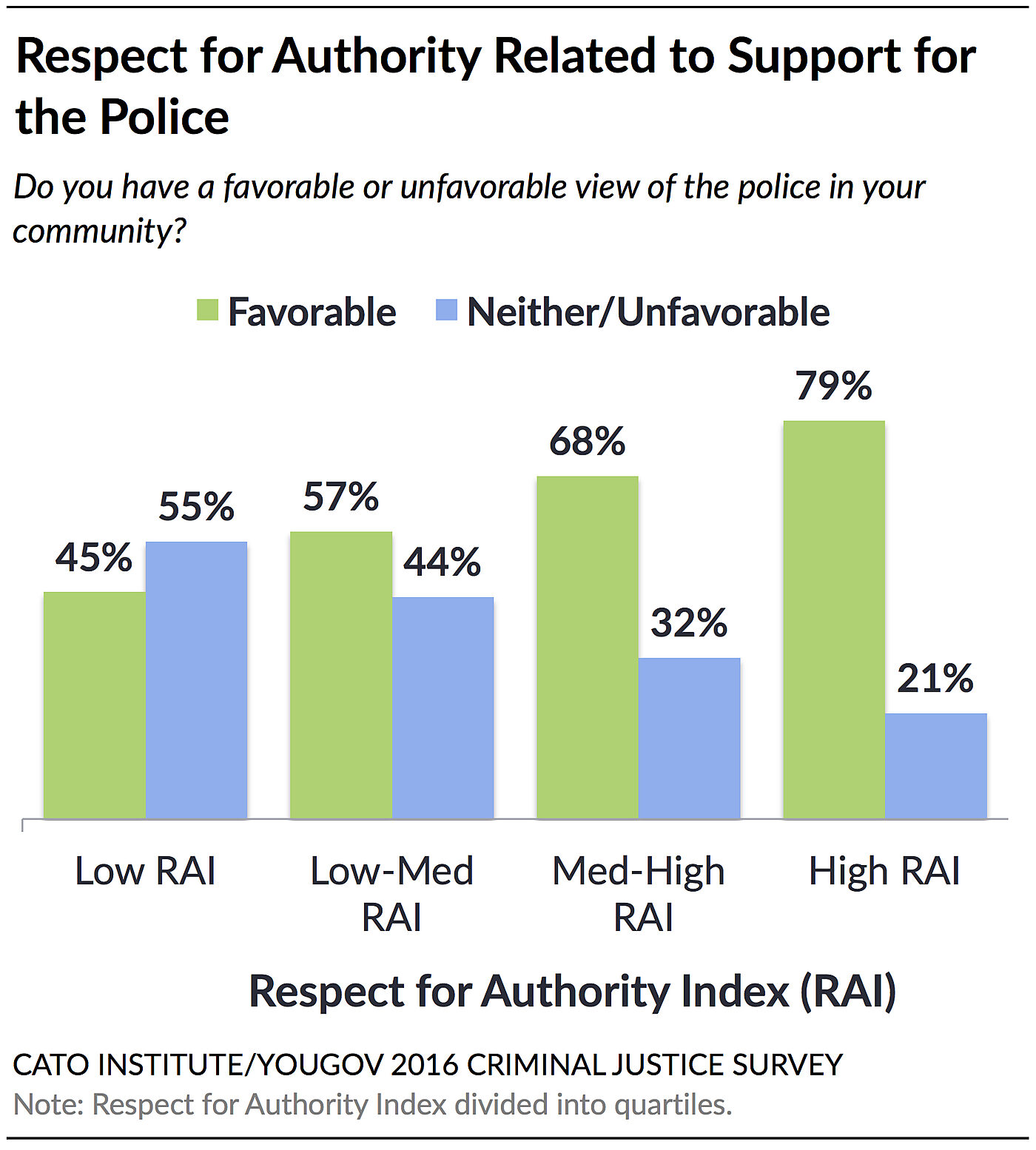 Social psychologists have found that respect for authority is a universal instinctive trait in human psychology.55 As Haidt and Graham (2007) explain, "People often feel respect, awe, and admiration toward legitimate authorities, and many cultures have constructed virtues related to good leadership, which is often thought to involve magnanimity, fatherliness, and wisdom…[Societies may also] value virtues related to subordination: respect, duty, and obedience."56 While respect for authority figures is a universal human trait, it is more salient for some.57 These individuals believe strong authority figures are necessary to maintain social order and prevent society from devolving into chaos. Might these individuals be predisposed to have more favorable opinions of the police irrespective of circumstances? 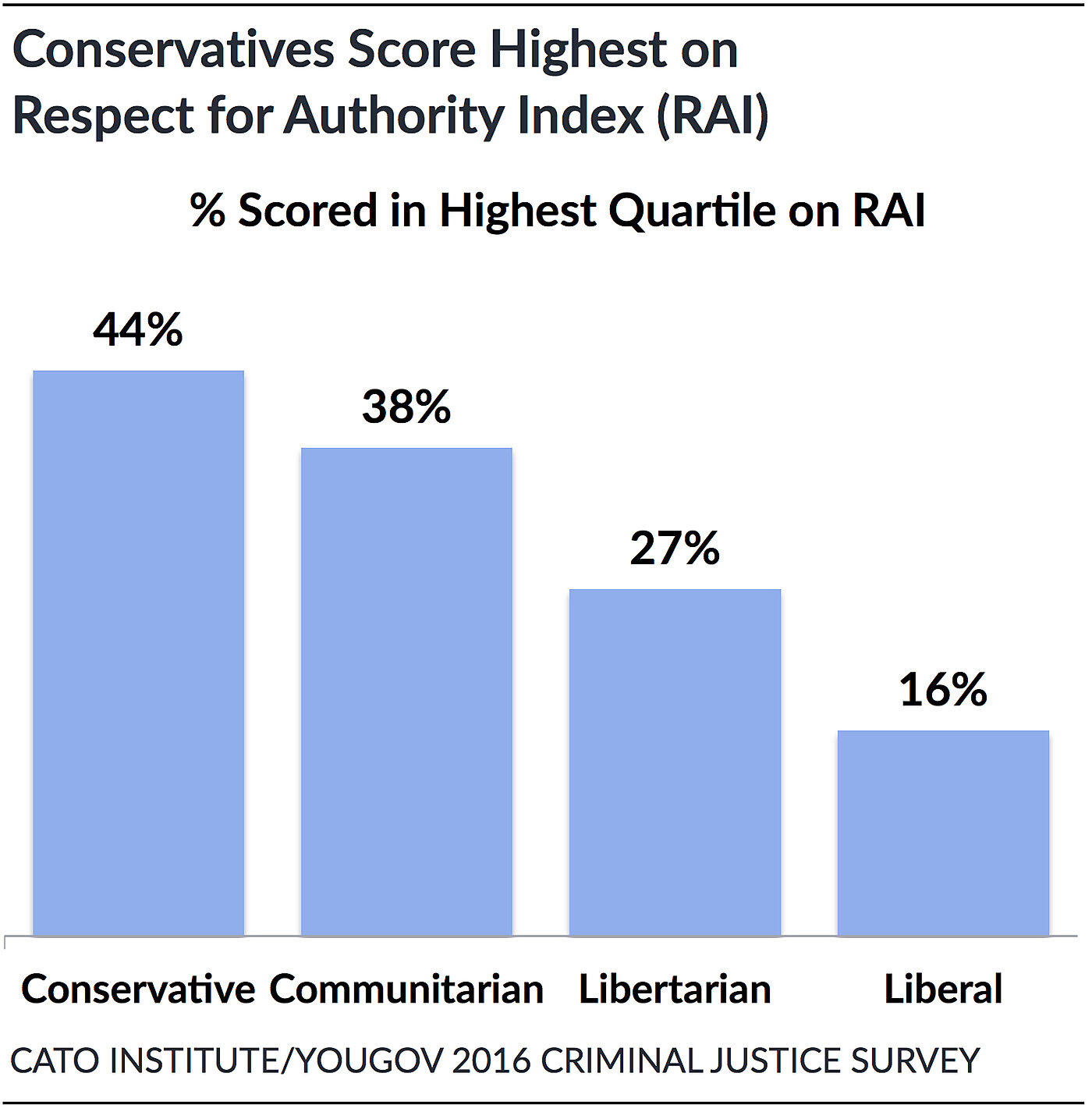 To investigate, the author created the Respect for Authority Index (RAI), a composite scale based on averaging responses to three questions that measured people's deference toward authority, without explicitly asking about police. (See Appendix E for question wording.) A higher RAI score indicates a respondent has a higher respect for authority.

Notably, the RAI index does not detect significant differences by demographic groups, with two exceptions. Forty-two percent (42%) of Americans over 55 are in the highest RAI quartile compared to 17% among those under 35. Ideological Conservatives (44%) are also much more likely to score in the highest quartile than Liberals (16%) and Libertarians (27%).58 Communitarians, who favor a bigger government that also promotes traditional values, are similar to Conservatives with 38% scoring in the top quartile. 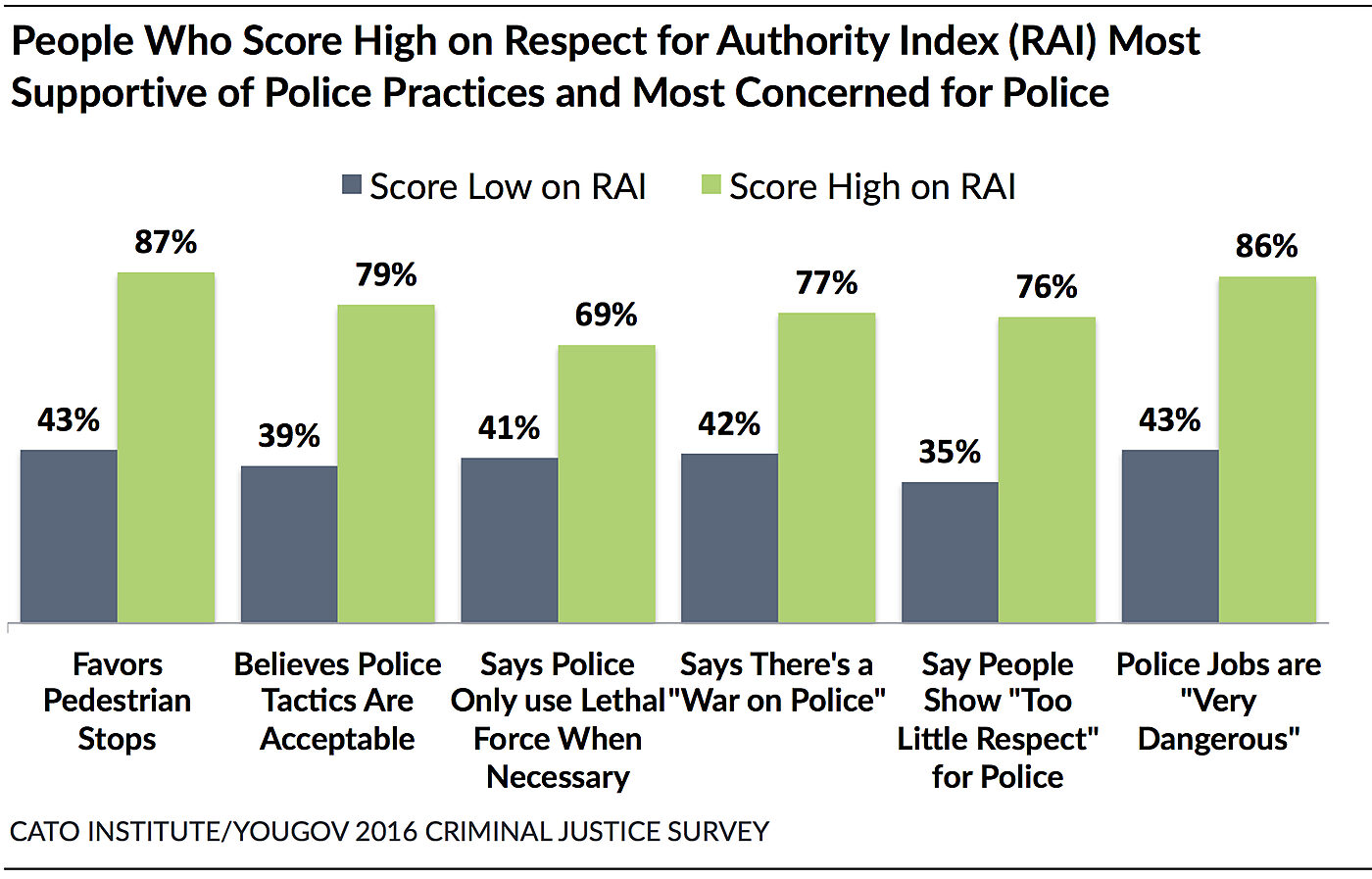 People with a high respect for authority are also far more likely to support stop-and-frisk-like policies. Eighty-seven percent (87%) of this group favor allowing police officers to stop and search people who the officer thinks looks "suspicious or out of place," compared to 43% of low RAI scorers. High scorers are also 40 points more likely than low scorers to believe police use appropriate force (79% vs. 39%).

Americans who score high on respect for authority are far more concerned the police are under attack. Among high RAI scorers, 77% believe there is a "War on Police," 76% say that Americans show "too little respect" for police these days, and 86% say that police officers' jobs are "very dangerous." In contrast, low RAI scorers are about 40 points less likely to believe there is a war on police (42%), that people aren't sufficiently deferential (35%), and that police have very dangerous jobs (43%).

People who highly respect authority figures are far more likely to believe society will break down if strong institutions do not regulate conduct. Among this group, 63% believe that violent crime would "increase a lot" if the government legalized drugs, compared to only 26% among low RAI scorers. They may also fear that criticizing the police undermines their legitimacy and thereby fosters social instability. 59 Thus, reformers may be more effective by making clear their commitment to support police work to promote safety, security, order and justice.

57 Jesse Graham, Jonathan Haidt, and Brian A. Nosek, "Liberals and Conservatives Rely on Different Sets of Moral Foundations," Journal of Personality and Social Psychology 98, No. 5 (2009): 1029-46.

58 See Appendix A for definitions of ideological groups.