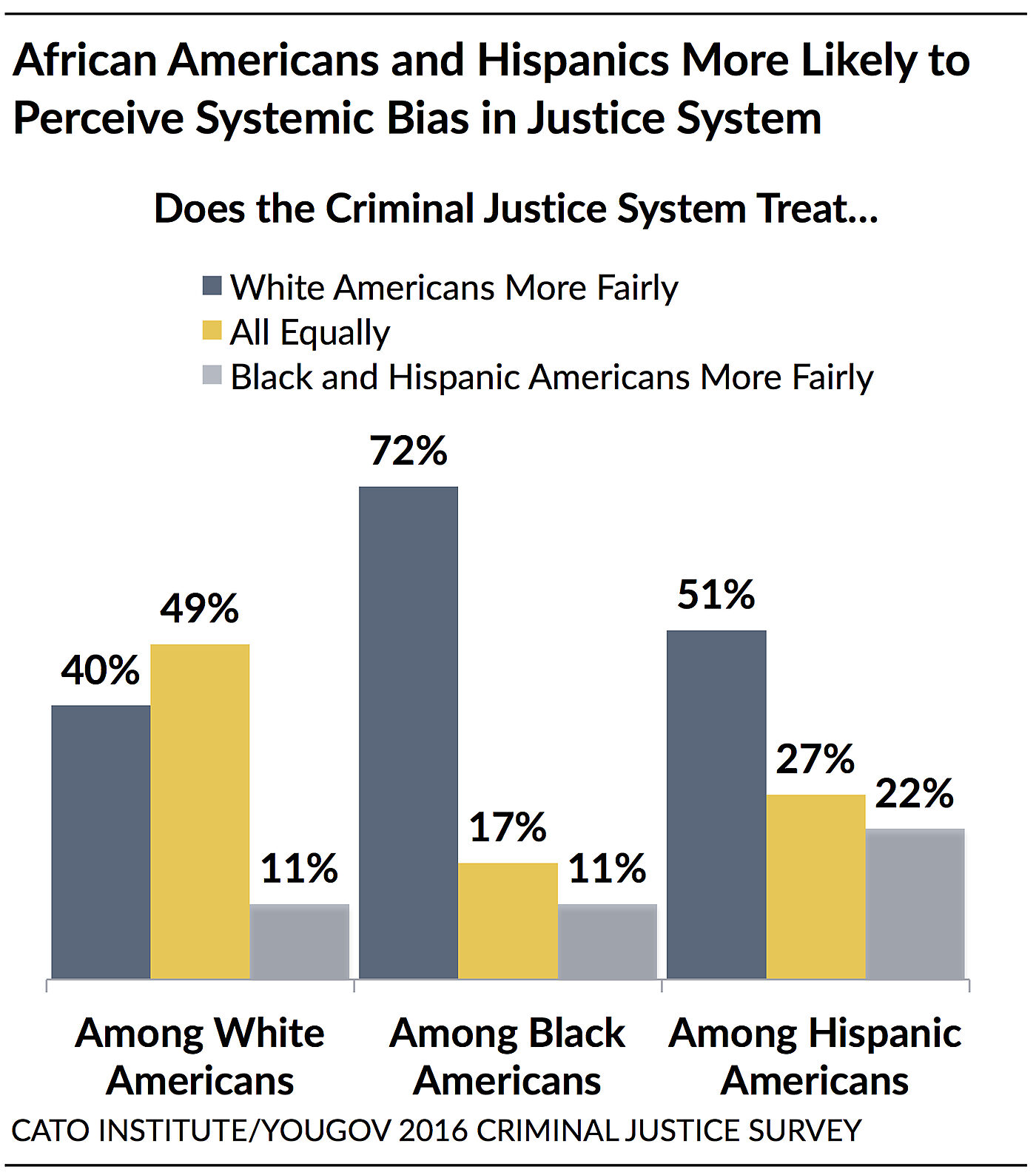 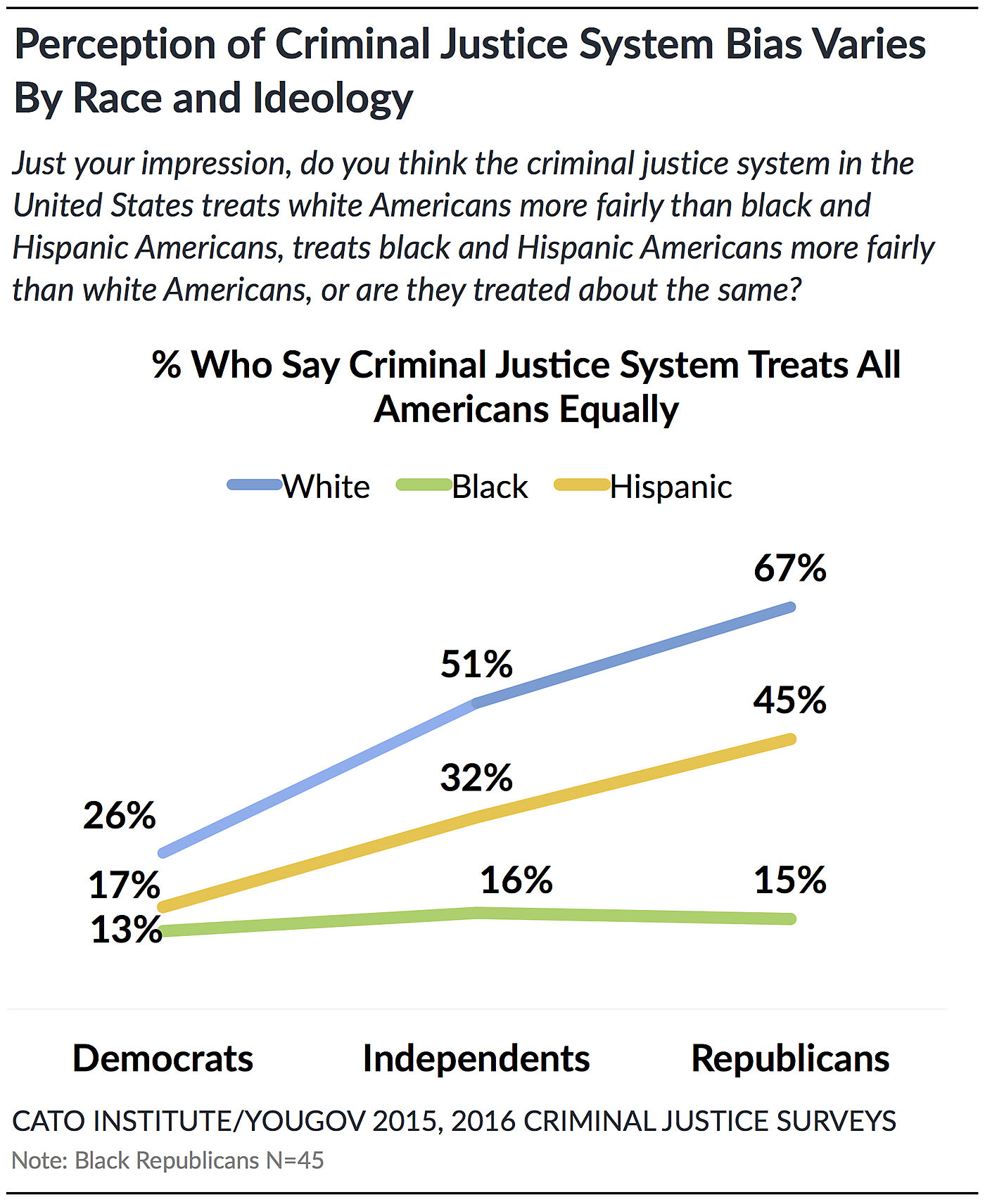 These data indicate partisan ideology is correlated with perceptions of impartiality in the justice system, but primarily for whites and Hispanics. Hispanic and white Republicans are both more likely than Hispanic and white Democrats to believe the system is fair. However, black Republicans and black Democrats have similar views about the system's fairness. Why? African Americans may have different personal or vicarious experiences with the police. 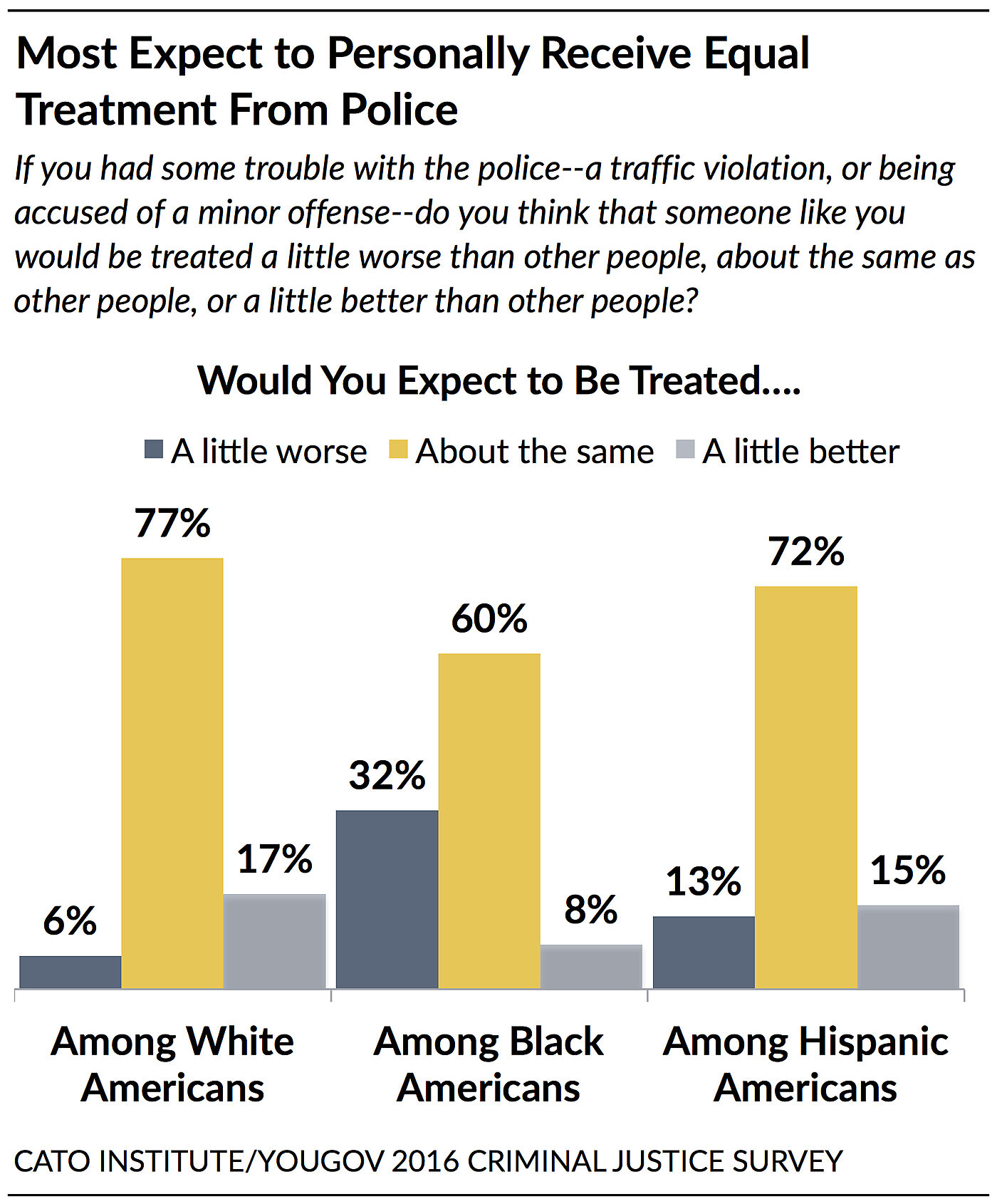 Although most Americans believe the justice system suffers from bias, 75% expect the police will treat them the same as anyone else for a traffic violation or minor offense. Ten percent (10%) of Americans think police would treat them worse than other people, and 15% expect they would be treated better. 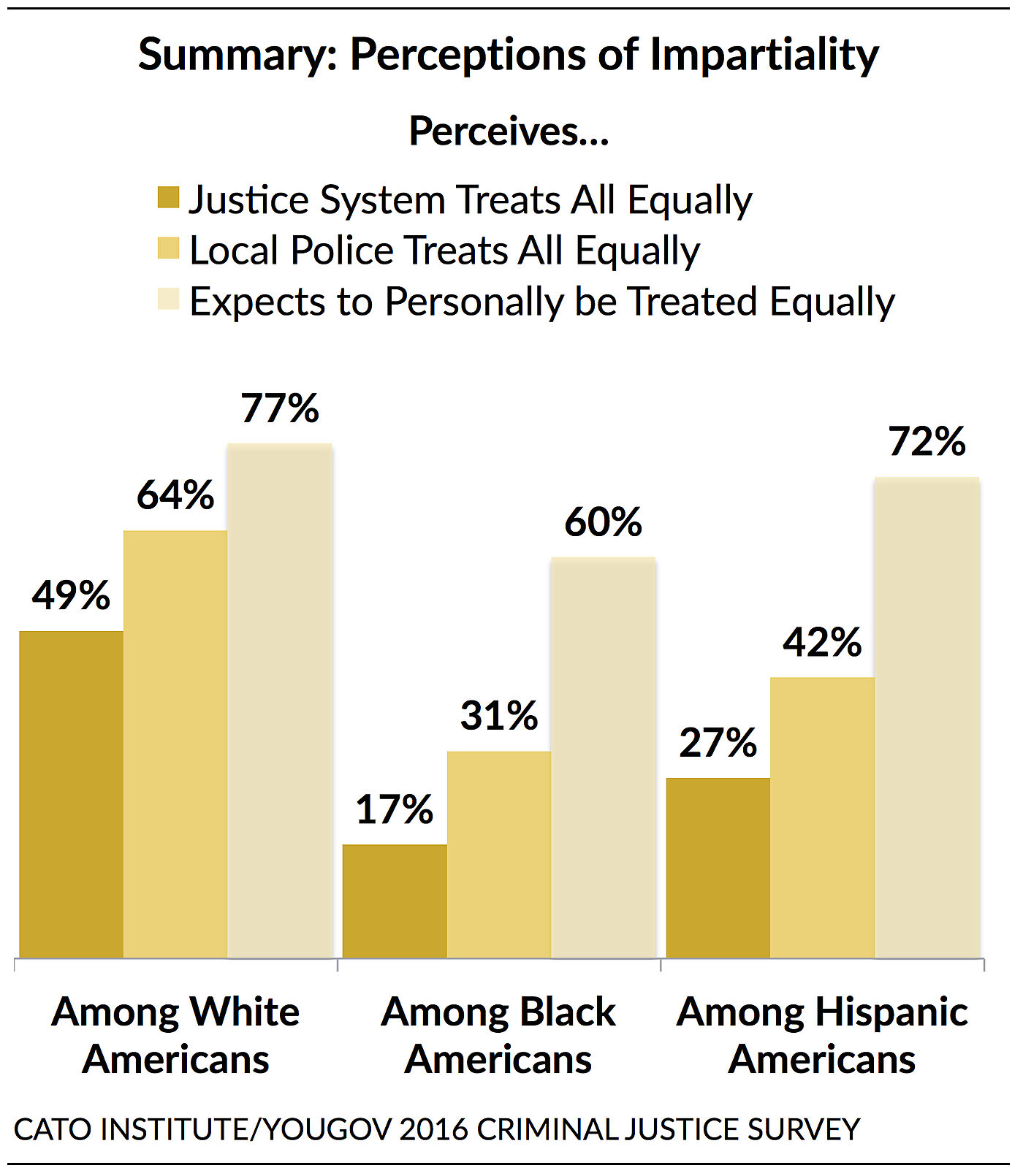 Notably, although only a third of African Americans and 42% of Hispanics highly rate their police departments for impartiality, majorities of both groups (60% and 72% respectively) believe they personally would be treated the same as other people.46 This suggests that expectations about personal treatment are not sufficient to explain perceptions of bias in the department overall. 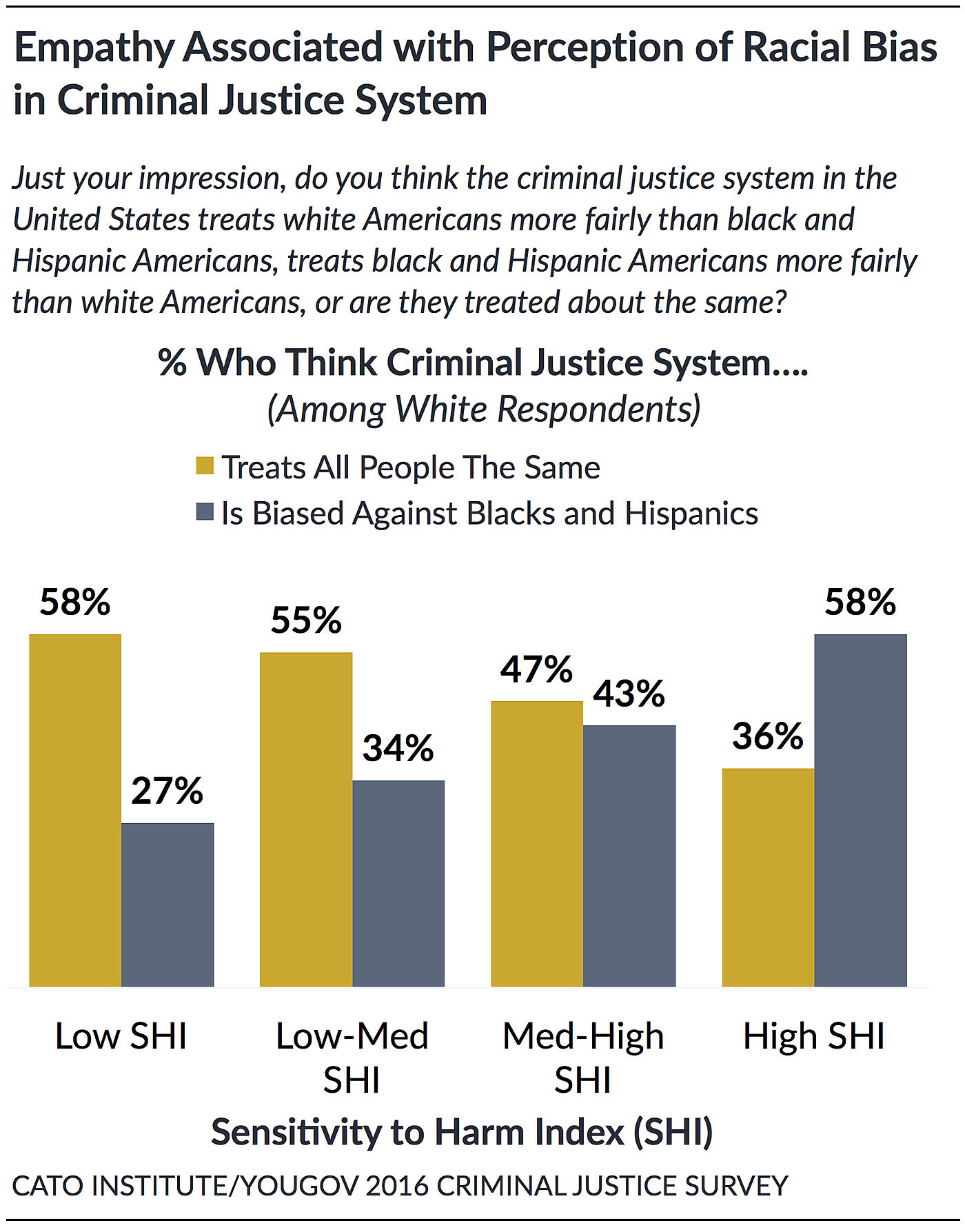 Taking these results together, Americans are more likely to perceive racial bias in the criminal justice system overall than at the level of their local police department. They are least likely to expect to personally be treated inequitably. Ultimately, perceptions of systemic bias more strongly and negatively correlate with favorability toward the police than do personal expectations. It is important for people to believe the system is fair — even to other people — for the police to have legitimacy.

Who Believes Charges of Racial Bias? What might lead a person to believe disparate treatment exists if one doesn't personally experience it? Perhaps an above average concern for others experiencing harm may lead one to be more apt to believe charges of racial bias.

To investigate, the author created a Sensitivity to Harm Index (SHI), based on the Care/Harm Foundation in Moral Foundations Theory.47 The SHI is a composite scale based on averaging responses to two questions that measure people's sensitivity to others' suffering, without explicitly asking about police or race. (See Appendix F for question wording.)For instance, respondents who strongly agree that "compassion for those who are suffering is the most crucial virtue" score higher on the SHI scale. SHI scores do not vary considerably across demographics, except that women tend to have higher scores than men.

Individuals who score high on the Sensitivity to Harm Index (SHI) are far more likely to believe racial bias is a problem in the criminal justice system. For instance, 58% of whites with high SHI scores believe the justice system is biased against blacks and Hispanics compared to 27% among those with low scores.48 Whites who score low on SHI are far more likely to say the system treats everyone the same than those who score high (58% vs. 36%). These results suggest that people who tend to empathize may be more sensitive to charges of racial bias in police encounters.

46 Sixty-four percent of white Americans highly rate their local police department for impartiality, while 77% expect they personally would be treated like anyone else.