In communities that distrust local law enforcement, police departments should seek to earn the trust and confidence of community members. This will bolster the law's legitimacy and help officers do their jobs effectively and safely. 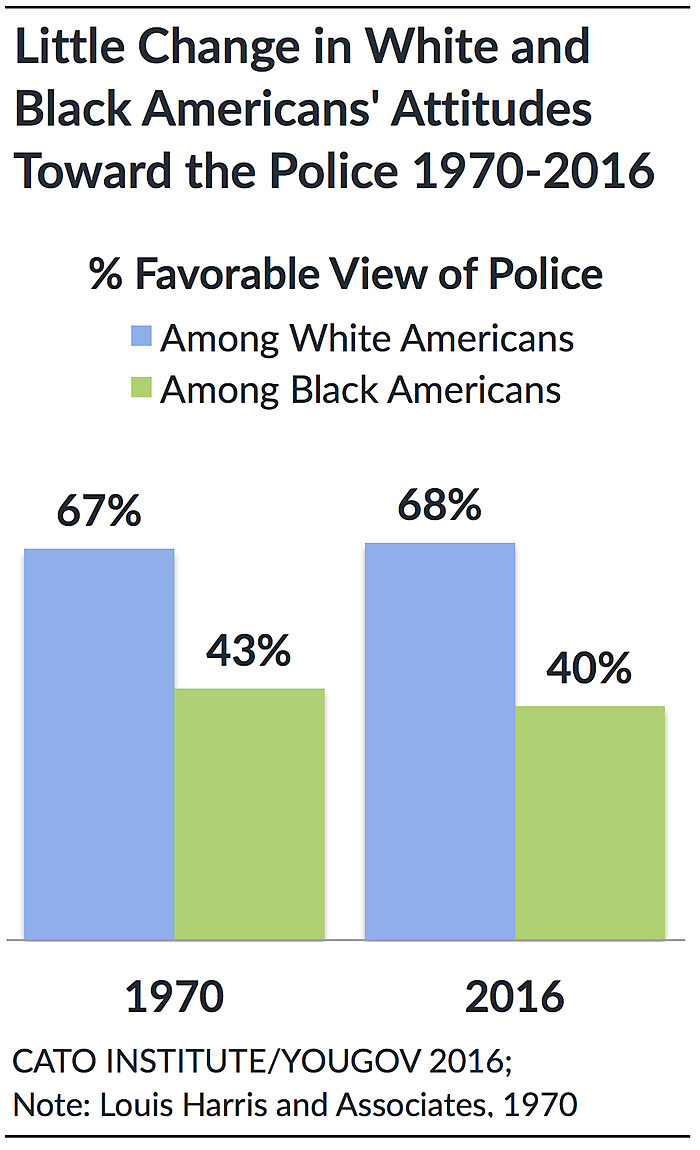 In order to rebuild trust and confidence in law enforcement, we must first understand what is driving these disparate attitudes toward police. The use of public opinion surveys can help to uncover not only what people think about the police but also to understand whythey think what they do. This can enable police departments and lawmakers to craft policies to improve police-community relations.

The Race Gap This report focuses on racial gaps in views of the police and does so for several reasons.

First, race and ethnicity are associated with sharp differences in favorability toward the police (see Appendix C). Moreover, public opinion studies of the police have long found that race strongly predicts attitudes toward the police.16

Age, income, and education can change, but the race and ethnicity of individuals persists. Thus, racial gaps in views of the police are more durable over time. 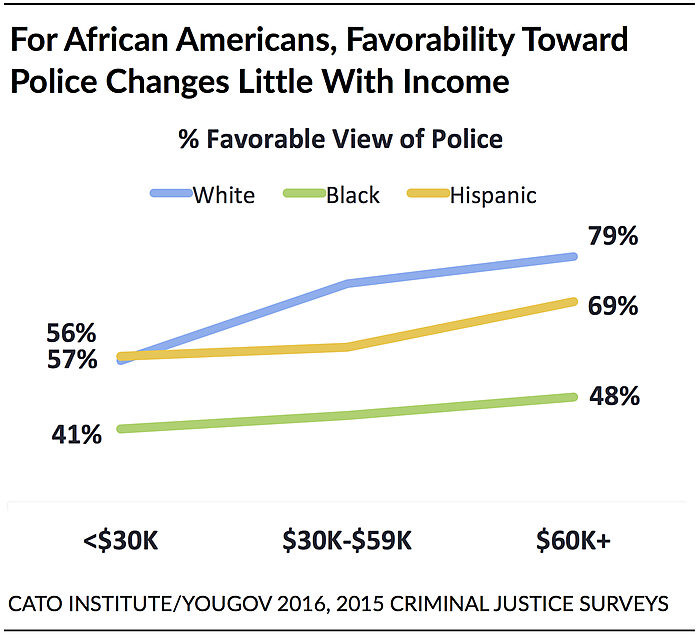 Surveys indicate that the racial divide on policing has not changed much over the past 50 years. In 1970 a national poll found 67% of white Americans and 43% of African Americans had a favorable view of the police.17 Similarly today, 68% of whites and 40% of blacks have a favorable view of the police. This suggests police reforms implemented since the 1970s have done little to close the confidence gap.

Race appears to affect views of the police even after considering the effects of other demographic factors. For instance, whites making more than $60,000 a year (79%) are more than 20 points more likely than whites making less than $30,000 (56%) a year to have a favorable view of the police. However, higher income African Americans (48%) are not much more likely than lower income African Americans (41%) to have positive views of the police.

A similar pattern emerges across partisans. White Republicans (83%) are nearly 20 points more likely than white Democrats to feel favorable toward the police. However, black Republicans (44%) are no more likely than black Democrats (44%) to have a favorable view. Thus race appears to affect attitudes toward the police even after considering the influence of income and ideology.19

Despite the fact that Hispanics comprise 17.4% of the US population, little research has examined the similarities and differences in attitudes between Hispanics and other groups.20 The little research that does exist suggests Hispanics may take a "middle ground" between white and black Americans in their attitudes toward the police and thus should not be combined with other groups. 21 Our data also indicate that Hispanic attitudes are distinct from blacks' and whites'.

This report carefully examines the racial gap in views of the police and makes efforts to identify potential causes. To assist in this endeavor, the survey included oversamples of African Americans and Hispanics (see Survey Methodology Section). Results are weighted to be representative of the national sample.

In the next section, the report explores a variety of Americans' perceptions, experiences, and beliefs about law enforcement that may impact overall favorability toward the police. Next it examines which of these perceptions and experiences best predicts favorability toward the police. Lastly, the report investigates public support for a variety of reforms and policy changes proposed in recent years to improve police-community relations.

18 These data come from the combined June 2016 and November 2015 national surveys (N=4000), which offer greater precision and smaller margins of error for subgroups. (Unweighted: Black Republicans=45.)

19 All racial groups become more supportive of the police as they age; however, age does not erase the race gap.

Back to Table of Contents