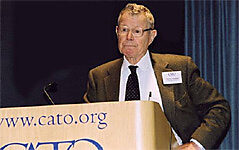 Thomas Schelling at the Cato conference, “Global Warming: The State of the Debate.”

Thomas C. Schelling was the co‐​recipient (with Robert Aumann) of the 2005 Nobel Memorial Prize in Economic Science, “for having enhanced our understanding of conflict and cooperation through game‐​theory analysis.” Schelling was the Distinguished University Professor, Emeritus (Department of Economics and School of Public Affairs), at the University of Maryland, and Lucius N. Littauer Professor of Political Economy, Emeritus, Harvard University. Schelling was a contributor to Cato’s 1999 book, What Do Economists Contribute? edited by Daniel B. Klein, and a speaker at Cato’s 2003 conference, “Global Warming: The State of the Debate.”

Contributor, What Do Economists Contribute?, edited Daniel B. Klein (1999).

Speeches at the Cato Institute

Schelling’s homepage at the University of Maryland