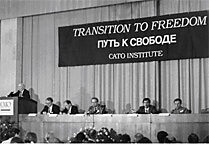 Douglass North (at the podium), speaking at Cato’s 1990 Moscow conference.

Douglass C. North’s pioneering work into the importance of institutions and the explanatory power of economic history has come to be known as the “new institutional economics.”

North’s research put market‐​augmenting institutions back at the center of economic theory. Looking at economic growth from the Middle Ages until today, North found that institutional adaptations were more important than technological changes. At the heart of this analysis are private property rights as a key determinant of economic growth. Societies that protect ownership see levels of growth that far outpace those that don’t.

North was the Spencer T. Olin Professor in Arts and Sciences at Washington University in St. Louis. He was the co‐​recipient (along with Robert Fogel) of the 1993 Nobel Prize in Economics “for having renewed research in economic history by applying economic theory and quantitative methods in order to explain economic and institutional change.” North authored numerous books, including The Rise of the Western World (with R. P. Thomas, 2nd edition), Growth and Welfare in the American Past, Structure and Change in Economic History, Institutions, Institutional Change and Economic Performance, and most recently Understanding the Process of Economic Change.

“Understanding the Process of Economic Change,” by Douglas C. North, reviewed by Will Wilkinson, Cato Journal, vol. 25, no. 1, Winter 2005.