WASHINGTON — The Cato Institute tops a new measure of think tank performance in the United States, according to a report released this week. 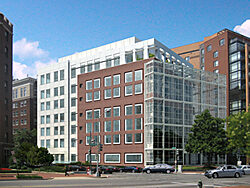 The Center for Global Development, a Washington‐​based think tank itself, released a new ranking of think tanks by public profile, which used indicators including social media fans, media and scholarly citations, and web traffic. Cato bested all other U.S. think tanks in the main category of “Aggregate Profile per Dollar Spent.”

The report ranked Cato #3 overall in terms of total profile, behind the Heritage Foundation and the Brookings Institution. However, the report noted that the annual budgets of both Brookings ($88.9 million) and Heritage ($80.4 million) are almost four times the size of Cato’s ($23.6 million). As such, the Cato Institute beat out competing think tanks in the study’s key metric of efficiency.

While the Cato Institute’s budget is not even in the top 10 among the organizations ranked by the report, the authors found that Cato consistently accomplished more with less, ranking 5th in media mentions, 3rd in web traffic and 2nd in social media fans.

“I’m grateful to the Center for Global Development for showing that Cato gives its sponsors something I wish government gave more of to taxpayers: bang for the buck,” said Cato CEO John Allison. “It’s easy to throw money at a problem if you’ve got it. It’s even easier if it’s somebody else’s money. This report shows that Cato doesn’t just talk the talk when it comes to efficiency, effectiveness and value — we also walk the walk.”