America’s criminal justice system is more profoundly broken than most people realize. In their new book, Injustice for All: How Financial Incentives Corrupted and Can Fix the US Criminal Justice System, professors Chris Surprenant and Jason Brennan show that much of our system’s dysfunction is simply the result of rational actors responding predictably to economic incentives. Although other factors such as race certainly play a role, “when it comes to the color of justice in America,” they argue, “follow the money. What matters even more than black and white is green.”

Our criminal justice system spends approximately $300 billion per year and employs nearly three million people, and in many ways, it acts like the big business it has become. Not surprisingly, this “prison‐​industrial complex” is highly resistant to change because, as Surprenant and Brennan explain, all of the people employed by the system “have a personal stake in preventing the types of reform that would make their jobs go away.” Despite the strong case that incarceration is often unjustifiably harsh and causes more problems than it solves, we go right on locking people up and earning our status as the world’s most prolific jailers of human beings. Are we doomed to this punitive nightmare, or is there some way to resist our incentive‐​driven addiction to incarceration? We will discuss this and other important questions raised by Surprenant’s and Brennan’s provocative new book. 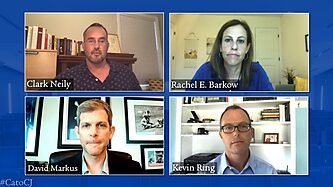 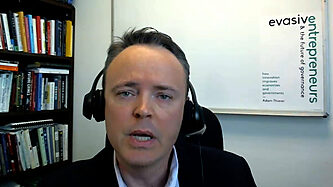 Evasive Entrepreneurs and the Future of Governance: How Innovation Improves Economies and Governments