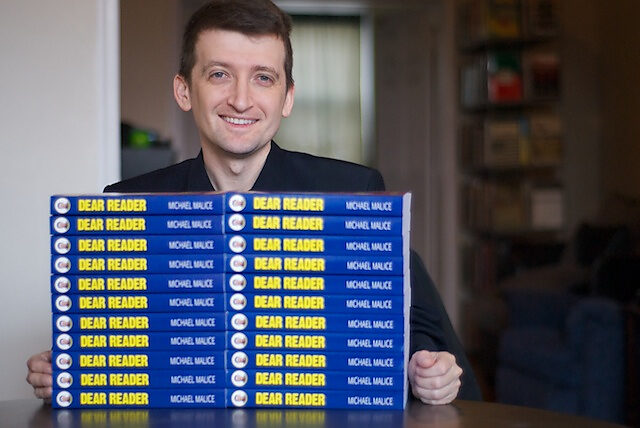 Michael Hamilton: What led you to intern at the Cato Institute, and who were you assigned to work with?

Michael Malice: I had read an article in New York magazine called “The Rad Right” which referred to libertarians’ “wacky consistency.” Accompanying it was a picture of Cato that captioned it as “Howard Roark goes to Washington.” I was a fan of the Fountainhead so I found this intriguing. When I later on a trip to DC, I wandered off and stumbled upon the Cato building. I was going to Bucknell University at the time, one of the more reprehensible places I’ve been involved with, and they had a program where you could study “abroad”–including DC. Anything to get away from that awful campus!

I interned with Doug Bandow. He never came into the office, just left me stuff to do in my mailbox. We joked that he was a head in a jar, and that the huge Xerox up on the 5th (I think 5th) was the Master Ship he used as a body.

MH: How did your internship at Cato influence your subsequent career?

MM: It gave me hope that you can work in an office and enjoy the company of the people around you. It also inspired me enormously to produce something that those kids in the intern room would enjoy. I remember the intern days very vividly. I often lecture to young libertarian audiences about How to Network, because I remember that was what I was most unsure about then.

MH: You’ve co‐​written celebrity autobiographies with D.L. Hughley, and others. How did you get into this industry?

MM: I had a book proposal go out that went nowhere. One of the editors liked what I was trying to sell, however, wanted to bring me on to co‐​author a book he was currently working on. That didn’t happen. But then he needed an author for another book, and that became Made in America–a New York Times Bestseller. The path to breaking through is rarely linear.

MH: Can you tell us about your latest book, Dear Reader?

MM: It’s the Unauthorized Autobiography of Kim Jong Il. No one in the movement was talking about north Korea to any great extent, yet everyone in America is a libertarian vis a vis the DPRK. I thought this was a need that had to be filled. The book is a first‐​person account of Kim Jong Il’s life, plotwise. But it’s also a comprehensive history of the country and a thorough look at who and what they are, written in a pop style. It’s the greatest book ever written.

MH: Dear Reader follows the format of the earlier biographies you’ve written, but you had to write it without a willing celebrity accomplice. How did you research the topic?

MM: I have PTSD just thinking about it! I read sixty books as research to make sure that the information in Dear Reader was not only accurate but comprehensive. I also didn’t want to miss any insane North Korean turns of phrase, like their claim that the Tower of the Juche Idea can be seen from all the corners of the earth. Then I had to take all the data and construct a fun narrative that still rings to true to Kim Jong Il’s voice–but not as boring.

MM: My Reason piece is worth a read. Briefly, it’s like going to another planet, back in time. I would also note that there are several things impossible to describe: the sense of isolation from the outside world, and what it’s like being in a capital city without electricity at night. But meeting the people really humanized their plight for me.

MH: Are you working on any book‐​length projects at the moment? If so, can you share the topic?

MM: I’m actually currently having fun being a recurring obnoxious loudmouth on The Independents and write regularly for Thought Catalog. Dear Reader took a lot out of me!

MH: Many of our fellow intern alumni are aspiring authors. Do you have any advice for those looking to get published?

MM: I’ve actually written a long article about this. If I could offer one piece of advice, it would (sincerely) be: “aspire to mediocrity.” There are plenty of terrible writers out there. It’s much easier to figure out how they got published and to reverse‐​engineer their process than to try and be the next F. Scott Fitzgerald. So many books suck. When you realize that you can be one of those sucky writers, the goal seems far less unattainable.