Venezuela's Student Movement has transformed the country and activated pro-democracy support for Venezuela around the world. Liberty has become the rallying cry for hundreds of thousands of students incensed by the policies of the Venezuelan government under President Hugo Chávez.

Originally sparked by the government shutdown of Venezuela's oldest private television station, Radio Caracas Television (RCTV), in May 2007, the nation's student leaders mobilized in opposition to human rights violations by the Venezuelan government.

The Student Movement is comprised of student leaders from public and private universities across Venezuela who are not driven by the hate of one leader or administration but, rather, by the desire for democracy and basic civil rights. They are explicitly non-partisan and seek only to promote discussion and social change.

Following the shutdown of RCTV, the Student Movement took to the streets in peaceful protests and began documenting the increasing civil rights violations taking place throughout the country. The Student Movement demands that the government guarantee students' right to demonstrate peacefully; the right to participate in public affairs regardless of political affiliations; and the right to free speech.

The Student Movement's leaders and participants have been subject to political persecution and aggression from the Venezuelan government. They have been attacked, beaten and injured by government loyalists, and imprisoned for protesting in favor of Venezuelan democracy.

The students have presented their reports in the form of petitions to multiple branches of the Venezuelan government, including the People's Ombudsman, the National Legislature, the Supreme Tribunal, the Attorney General's Office, and the National Electoral Council, as well as internationally.

They have engaged in more than 40 peaceful protest marches, averaging 80,000 people each. Documentary and video evidence of Venezuela's student movement now proliferates on the Internet, increasing awareness of the students' efforts – and the human rights violations they protest – throughout Latin America.

The group's greatest victory to date came in December 2007 in the face of a constitutional referendum that would have expanded Chávez's power and allowed him to run for his office indefinitely. The outpouring of student opposition to the measure played a crucial role in its defeat. With this victory, it has been suggested that the Student Movement saved Venezuela from becoming a dictatorship. 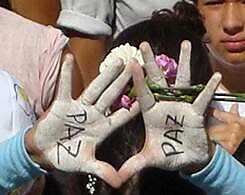 Support garnered by the Student Movement—not only from students but from civil society in general—has received the attention of government authorities, who have publicly attacked the students, labeling them "fascists," "enemies of the fatherland," "far-right collaborationists," and "puppets of the empire."

The Student Movement, however, remains strong. Students continue to spearhead acts of peaceful protest in defense of democracy and Venezuelan liberty. As student leader Yon Goicoechea states, "Like Martin Luther King, we do not fight against a man, we fight for the vindication of civil and human rights for everyone in Venezuela. Our objective will not be met in a month or in a year, so we have to prepare for the long struggle that awaits us." 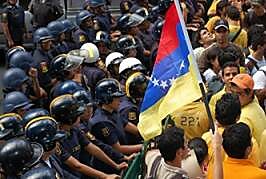 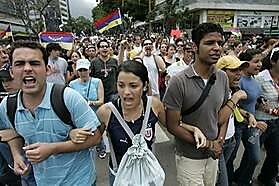 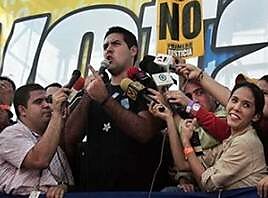