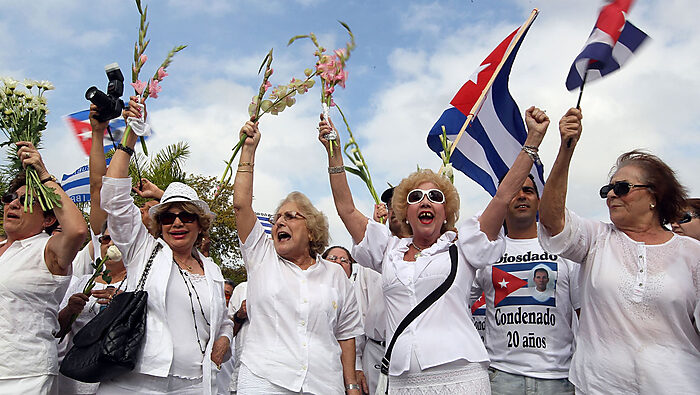 The Ladies in White (Damas de Blanco) have a simple message: The political prisoners of Cuba are our sons, our brothers, and our husbands. They must not be forgotten.

Every Sunday, the Ladies in White gather, or attempt to gather, for Mass at Saint Rita de Casia Church in Havana, followed by a procession down Fifth Avenue. They wear white to symbolize the peaceful nature of their protest, and each wears a photograph of a loved one who is in prison. For this the authorities have constantly harassed them and organized mob violence against them.

The movement began on March 18, 2003, when journalist Héctor Maseda Gutiérrez was arrested in his home in Havana and sentenced to 20 years in prison for criticizing the regime of Fidel Castro. His case drew worldwide attention, with Amnesty International calling him a prisoner of conscience and demanding his release. Around 75 others were arrested at the same time, in an incident that has been called the Black Spring. All have since left prison, though not unconditionally, with the majority having had to leave Cuba. Since that time, sporadic arrests of journalists, lawyers, and other intellectuals have continued in Cuba, belying the myth that with normalized relations, Cuba’s human rights record would improve. If anything, it has deteriorated.

Two weeks after Maseda was arrested, his wife Laura Pollán Toledo brought together a group of wives, mothers, sisters, and daughters of the imprisoned to pray for their loved ones. They have continued to gather each Sunday, and the movement has since spread to other churches throughout Cuba. Although they are not a political party and do not have an overtly political program, they seek freedom of expression for all and the release of prisoners of conscience in Cuba. In recognition of their courage, the Ladies in White were the 2005 recipients of the Sakharov Prize for Freedom of Thought, awarded by the European Parliament. The Cuban government prohibited them from attending the award ceremony in Strasbourg, France.

In 2015 Berta Soler, one of the leaders of the group, told the U.S. Senate, “Our aspirations are legitimate…. Our demands are quite concrete: freedom for political prisoners, recognition of civil society, the elimination of all criminal dispositions that penalize freedom of expression and association and the right of the Cuban people to choose their future through free, multiparty elections. We believe these demands are just and valid. Even more importantly, for us they represent the most concrete exercise of politics, a step in the direction of democratic coexistence. Cuba will change when the laws that enable and protect the criminal behavior of the forces of repression and corrupt elements that sustain the regime change.”

As the first step, the Ladies in White demand the release of all political prisoners. The outlook for many of the prisoners is grim; prison conditions are deplorable, visits are rare, and even their mail is intercepted by the authorities. And the Ladies themselves have faced increasing police harassment and arrest in recent years, as the Cuban government tries to hide-but not correct-its habit of quashing dissent. Laura Pollán died in 2011 under gravely suspicious circumstances. But the movement she founded continues: The Ladies in White will meet, pray, and bear witness every Sunday until Cuba’s political prisoners are freed. 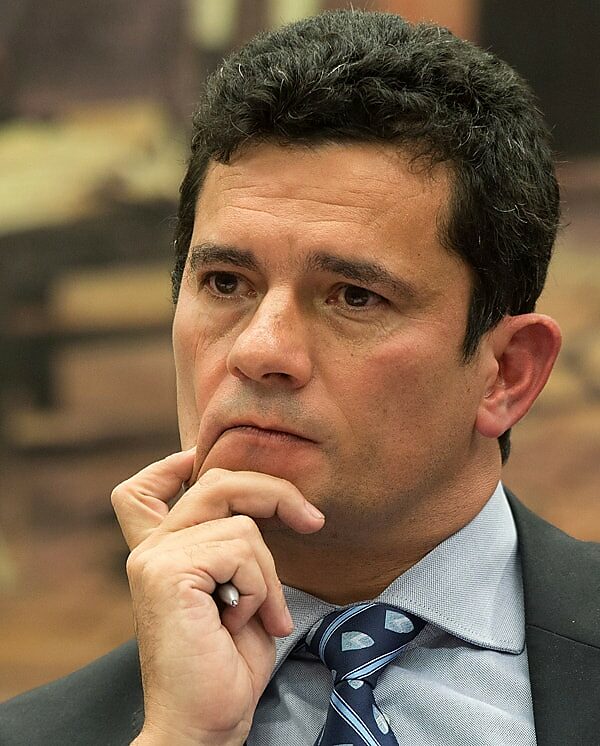 Judge Sérgio Moro has become a household name in his country thanks to Operation Car Wash, the massive scandal in which he has sent some of Brazil’s most powerful politicians and business elite to jail for corruption. As Brazilians have marched in the streets, calling for the impeachment or prosecution of sitting or former president, they have worn masks of Moro’s face and carried banners emblazoned with his name. Operation Car Wash began in 2014, originally as an investigation into a small car wash that served as a money laundering facility. It ended up uncovering a bribe that had been accepted by a top executive at the government-controlled oil company Petrobas—and from there, investigators began toppling a massive network of corruption involving hundreds of people, including politicians from the ruling and opposition parties, and billions of dollars in bribes, often using public funds. Moro, who has presided over some of the biggest cases in the scandal, is credited with changing the way corruption cases are tried in Brazil, refusing to offer the wealthy and politically connected special treatment and declaring that, "No matter how important you are, no one is above the law."

International Selection Committee for the 2018 Prize: