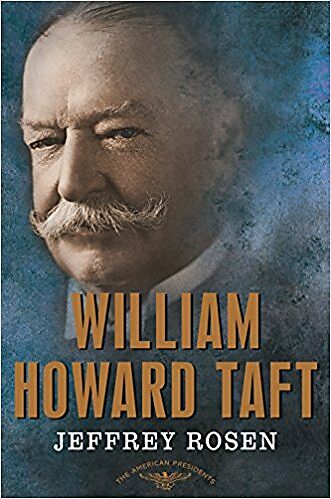 Our 27th president, William Howard Taft, has been relegated to a historical afterthought, if not a punchline. If he’s remembered at all, it’s for his enormous girth and periodic difficulties with bathtubs. Yet in this slim volume on our largest president, Jeffrey Rosen argues that Taft has much to teach us today. Our “most judicial president,” who later served as Chief Justice of the Supreme Court, shared the Framers’ conception of the presidency as a constitutional rather than a popular office. In his single presidential term and his failed bid for reelection in the pivotal 1912 race, Taft staunchly opposed Teddy Roosevelt’s “stewardship” theory of the office, which empowered the president “to do anything that the needs of the nation demanded unless such action was forbidden by the Constitution or the laws.” The president’s authority, Taft countered, is limited to what the Constitution and the laws specifically grant, and to hold otherwise would lead to an imperial presidency.

In his reluctance to rule by executive order or wage war without Congress — and in his resistance to popular passions — Taft serves both as a model of what a constitutional presidency could be and a reminder of the challenges facing that model in the modern era.

Please join us on June 15th for a lively discussion of the Taft legacy and what we can learn from it today.