A Superpower in What? A Look Into the Nature of Russia’s Social Order

Proclaimed an energy superpower, Russia under Vladimir Putin received more than $1 trillion in revenues from oil and gas. The bonanza brought the country’s elite Swiss watches, villas on the Cote-d’Azur, and British football clubs. The Russian president has thirteen private residences and is building a dozen more. Julia Latynina, one of Russia’s leading independent journalists, will explain that while Russia may have surpassed the United States on some such measures, the country’s new wealth has not brought internal peace, functioning state institutions, or a modern economy. Instead, Russia has become the world’s largest exporter of corruption and the largest importer of legal services from the European Court of Human Rights. Please join us for this discussion on the current nature of Russia’s social order. 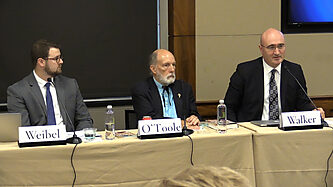