Americans are fascinated by outer space. Most would take a trip into orbit if they could. But critics maintain that, in the three decades since men last walked on the Moon, NASA has gone from science and exploration to bureaucracy and politics, with high costs keeping space inaccessible to most entrepreneurs as well as to the general public.

Privatization and deregulation of industries such as airlines, trucking, and telecommunications have reduced costs and created new economic opportunities. The communications and information revolution has transformed the economy and society. It is time to unleash the dynamics of free markets in the space sector.

Entrepreneurs already are providing private launch services, satellites, and modules for broadcast and Internet services. Other planned innovations include collecting and beaming energy to Earth from orbit, a lunar rover sponsored by Radio Shack, and even space adventure travel for private citizens. But such profitable plans require radical reforms of America's space policy and the role of NASA.

Click here for more information and to view videos from the conference. 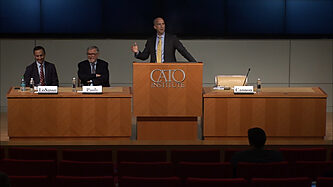