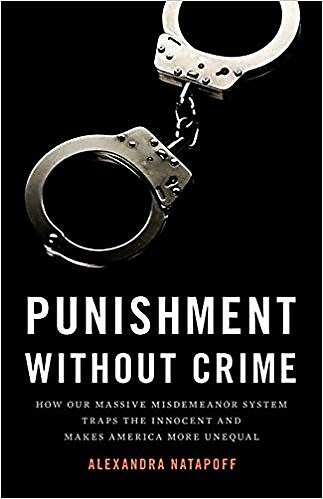 At any given time, the United States holds almost two million people in prison for felony convictions. Often overlooked, however, are more than 11 million people who cycle in and out of American jails every year for misdemeanor offenses.

Despite composing the largest part of our criminal system, misdemeanors don’t usually garner the same policy attention as more overtly draconian features of the system — such as decades‐​long mandatory minimum prison sentences — because they are viewed as “minor offenses.” However, the overall punitive effect of misdemeanors, particularly on poor people and people of color, far exceeds what should be imposed for supposedly minor crimes.

In her recent book, Punishment without Crime: How Our Massive Misdemeanor System Traps the Innocent and Makes America More Unequal, Professor Alexandra Natapoff explains how our police, courts, and jails create a machinery of injustice that doles out unfair punishments and extracts wealth from those who can least afford it. She writes that the American criminal system “moonlight[s] as a regressive tax system and anti‐​welfare machine” that criminalizes the impoverished and further adds to their burdens. Natapoff’s research shows that the American petty crimes enforcement apparatus undermines the most important functions of criminal law by corroding the constitutional processes meant to provide justice to all.

Join us Tuesday, May 7, as Professor Natapoff discusses her important and revealing book with the Cato Institute’s Jonathan Blanks.