The Ideas and Impact of F. A. Hayek

“It is hardly an exaggeration to refer to the 20th century as the Hayek century,” John Cassidy wrote in the New Yorker. Confirming Hayek’s stature, two new books from major publishers explore the development of his thought. Biographer Alan Ebenstein discusses Hayek’s Austrian roots and his relationship to such thinkers as Mill, Marx, Keynes, and Popper. Bruce Caldwell, editor of The Collected Works of F. A. Hayek traces the complex evolution of Hayek’s thought—and the evolution of Austrian economics—and places Hayek in a broader intellectual context. His book has been called “the best book in economics of 2003.” Please join us for a discussion of one of the most influential thinkers of the 20th century. 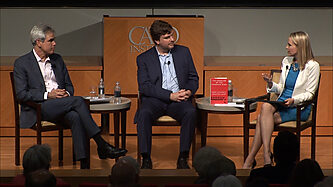