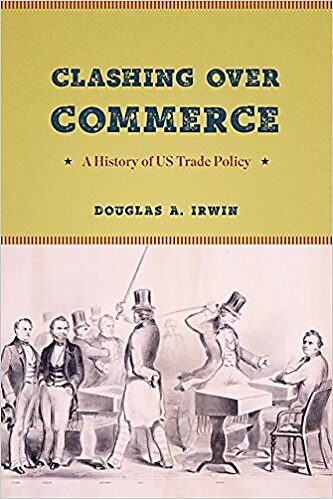 Trade, tariffs, and America’s role in the global economy have taken center stage in the public policy debate during the first year of Donald Trump’s tumultuous presidency. That’s not surprising to economic historian and Dartmouth economics professor Douglas A. Irwin, whose latest treatise on the subject documents in exquisite detail how “the Tariff” has sparked passionate political, economic, and constitutional debate and has been a source of bitter political conflict from the Founding of the Republic to the present.

Between 1787 and the Civil War, the main purpose of the tariff was to raise revenues for the operations of a modest federal government, which had few other sources of revenue. Although arguments for using the tariff to protect domestic industry prevailed on occasion during this era, it wasn’t until after the Civil War that bald protectionism became the tariff’s primary motive. In the early 1930s, as the disastrous effects of the Tariff Act of 1930 (i.e., “Smoot‐​Hawley” or “the Hawley‐​Smoot Tariff,” as Irwin calls it) were rippling across the globe, the tariff was repurposed, again, for the nobler objective of inducing governments to agree to reciprocal reductions in their border protectionism. According to Irwin’s thesis, from the 1934 Reciprocal Trade Agreements Act to the founding of the General Agreement on Tariffs and Trade in 1947, through the multiple GATT rounds culminating in the founding of the World Trade Organization in 1995, and through the Obama presidency, reciprocal trade liberalization was the main purpose of the tariff. Will Congress acquiesce in a new purpose for the tariff or will it assert its authority against a new president who considers protectionism a tool to make America great again?