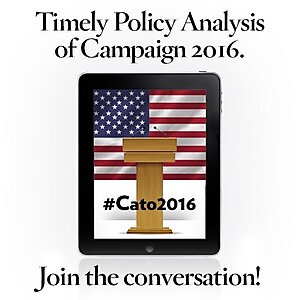 On Tuesday, October 13th, the first Democratic presidential primary debate of the 2016 campaign season will be held at the Wynn Las Vegas and broadcast nationwide by CNN.

Lincoln Chafee, Hillary Clinton, Martin O'Malley, Bernie Sanders, and Jim Webb are all expected to participate in the debate. CNN has also extended an invitation to Vice President Joe Biden, provided he declares his intention to seek the Democratic nomination as late as the day of the debate.

Cato scholars will be on hand to live-tweet the debate, bringing insightful commentary and hard-hitting policy analysis to the discussion. Join the conversation on Twitter using #Cato2016.