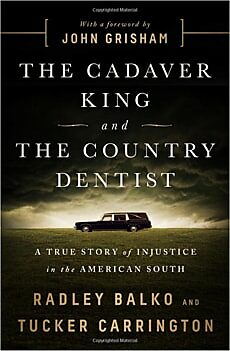 Over the past 25 years, more than 2,000 individuals have been exonerated in the United States after being wrongfully convicted of crimes they did not commit. There is good reason to believe that tens or even hundreds of thousands more languish in American prisons today.

How this can happen unfolds in the riveting new book from Radley Balko and Tucker Carrington. The Cadaver King and the Country Dentist recounts the story of two Mississippi doctors—Dr. Steven Hayne, a medical examiner, and Dr. Michael West, a dentist—who built successful careers as the go‐​to experts for prosecutors and whose actions led many innocent defendants to land in prison. Some of the convictions then began to fall apart, including those of two innocent men who spent a combined 30 years in prison before being exonerated in 2008.

Balko and Carrington reveal how Mississippi officials propelled West and Hayne to the top of the state’s criminal justice apparatus and then, through institutional failures and structural racism, empowered these two “experts” to produce countless flawed convictions on bad evidence and bogus science. Please join us for a conversation about the book and the broader lessons we can learn about criminal justice in our country.