Bill Niskanen’s new book presents simple models of the fiscal behavior of the major types of political regimes, estimates of the parameters of these models, the fiscal choices by each type of regime, and the economic outcomes of these fiscal choices. Each of the models yields estimates of the effects of varying levels of spending for defense and interest payments, the distribution of income and taxes, and the time horizon of fiscal choices. The book also presents a constitutional approach to taxes and transfers and the effects of the type of regime on issues such as war and immigration that affect the level of the population. In a comment on this book, Allan Meltzer states that “Bill Niskanen has pushed forward the analysis of tax and spending systems. He reduces the overwhelming complexity of government fiscal decisions to lay bare the choices that democratic governments make. Future work will build on his.” 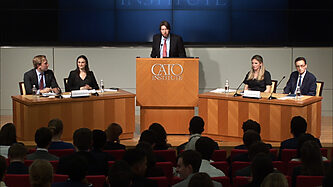