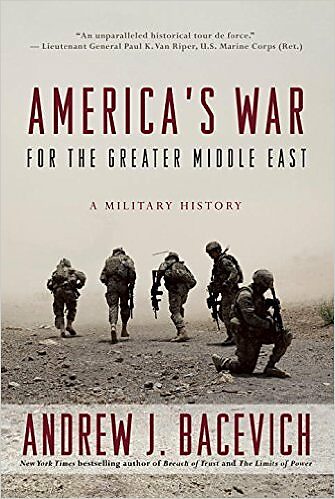 As the Cold War wound down, the United States initiated a new conflict—a war for the greater Middle East. From the Balkans and East Africa to the Persian Gulf and Central Asia, U.S. forces embarked upon a series of campaigns across the Islamic world with no end in sight. In his aptly titled new book, America’s War for the Greater Middle East, Andrew Bacevich connects the dots of a sweeping narrative from episodes as varied as the Beirut bombing of 1983, the Mogadishu firefight of 1993, the invasion of Iraq in 2003, and the rise of ISIS in the present decade. Indeed, Bacevich claims that America’s costly military interventions can only be understood when seeing the seemingly discrete events as part of a single war. Is he right? Or are America’s military adventures in the Middle East discrete occurrences driven by the unique circumstances of the moment? Is it really one big, long war, or many? Join us to find out.