A fundamental premise of self-government is that citizens and elected officials are sufficiently informed to make sound decisions about public policy. To satisfy this condition, it is necessary that government agencies provide accurate and timely data about their activities in a manner that is accessible and understandable to the average citizen. Since K-12 public education spending is generally the largest expenditure in states' budgets, it is especially imperative that state departments of education provide complete, timely, and understandable financial data to the public.

Unfortunately, the evidence suggests that the public is woefully misinformed about the true cost of public education. In its 2008 survey on education policy, Harvard University's Program on Education Policy and Governance (PEPG) asked respondents how much they thought their public schools spent per pupil, per year. The average of respondents' estimate was $4,231 and the median estimate was only $2,000. In reality, the actual average per pupil expenditure exceeded $10,000. Moreover, contrary to the common perception, public school spending has risen dramatically over the past 40 years, even after adjusting for inflation (see Figure 1). Over the same time period, student performance on standardized tests has remained essentially flat. 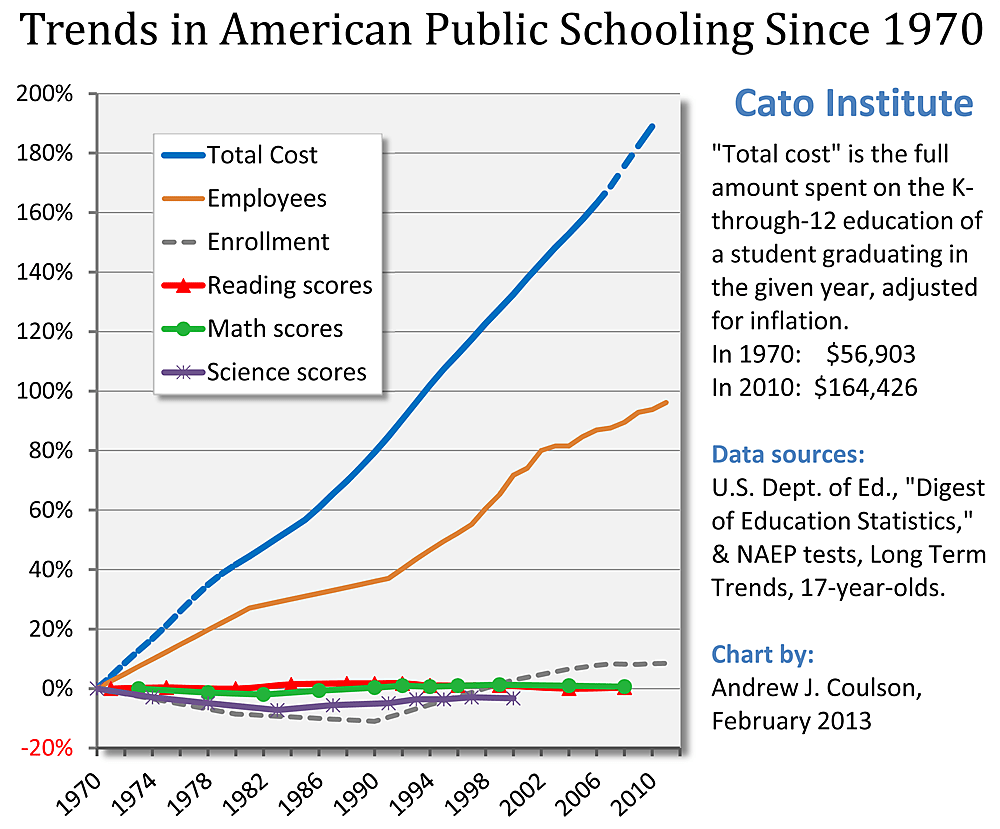 This widespread public misperception reflects a persistent media narrative that our nation's public schools are underfunded. In the Boston Globe, Derrick Z. Jackson laments "the death of public education" claiming that the "lack of money is killing our schools."1 In the New York Times, Billy Easton of the Alliance for Quality Education warns of "educational insolvency."2 In 2010 the Los Angeles Times awarded California "a failing grade for public school funding."3 Writing in Education Next in 2010, Arthur Peng and James Guthrie of Vanderbilt University lamented, "If one relies on newspaper headlines for education funding information, one might conclude that America's schools suffer from a perpetual fiscal crisis, every year perched precariously on the brink of financial ruin, never knowing whether there will be sufficient funding to continue operating."4 The reality is ever-expanding public school budgets and an increasing number of employees per student.

An uninformed or misinformed electorate can have enormous real-world consequences. For example, on Election Day 2012, a majority of voters in 29 of 31 districts in Colorado supported proposed property tax or sales tax increases to pay for over $1 billion in K-12 education spending, approving 34 bond issues and operating revenue increases.9 Twenty of these passed with fewer than 60 percent of voters supporting the measure, and two passed by a margin of 51 percent to 49 percent. If Colorado voters resembled the national sample in the PEPG survey, and if they had correct information about local school spending, it is likely that they would have viewed these measures differently.

The above scenario is not unique. In 2012 alone, statewide ballot measures to increase taxes and education spending passed with 55.3 percent of the vote in California10 and 59.9 percent of the vote in Oregon.11 Moreover, there is a high degree of likelihood that the public's inaccurate perception of education spending plays a decisive role in the local ballot measures and school board elections in the nation's 16,025 public school districts.

The source of the public's misperception about education spending can often be traced back to the government. Too often, state departments of education fail to provide timely and accurate financial data in a manner that is easily accessible and understandable to the public. Even when such data is provided, it is often incomplete or, worse, misleading. When reporting the most important measure of education spending, per pupil expenditures, 24 states report a figure that leaves out big budget items like capital spending (and Alaska does not report them at all). These partial expenditure figures, so-called "current" or "operating" expenditures, significantly understate the actual cost of K-12 education. A 2010 Cato Institute study of reported education spending in five of the nation's largest metro areas and Washington, D.C., found that the "gap between real and reported per pupil spending ranges from a low of 23 percent in the Chicago area to a high of 90 percent in the Los Angeles metro region."12

Missing and misleading data undermine democracy itself. A misinformed electorate makes different choices than a well-informed one. It is impossible to determine what the appropriate amount of K-12 education spending should be without accurate information about what is currently spent. This report shines a light on the expenditure data that each state education department website makes available to the public. A detailed explanation of the scoring process can be found on the Grading Criteria page.