Until February 20th, Zimbabwe produced a quasi‐​currency. It was dubbed a “Zollar.” On the 20th, the quasi‐​currency became Zimbabwe’s official currency. This new currency is called RTGS dollars and consists of bond notes and RTGS (electronic money).

That, however, is not the end of Zimbabwe's exchange-rate story. Zimbabwe imposes a plethora of exchange and capital controls on its citizens. Under these exchange controls, private individuals, traders, and companies must seek permission from the government to buy, sell, and hold foreign currencies. So, neither the old Zollar nor the new RTGS dollar is freely convertible into a foreign currency. In consequence, a black-market (read: free market) exists. Indeed, whenever there are exchange controls and restrictions on free convertibility, black markets always appear. At present, the black-market rate is 5.75, which represents a considerable premium over the official rate of 2.50 RTGS$/USD.

The black-market usually yields a premium over the official rate, as it does Zimbabwe. In some cases, the premiums can reach staggering levels. For example, in 1982, Ghana's cedi carried a premium of over 2,000%. These premiums are known as black-market premiums.

The chart below contains 22 countries that have black markets in foreign exchange and for which data are available. North Korea tops the list with a black-market premium of 811%. This suggests that controls are severe and that an official devaluation will eventually be in the cards. Venezuela is at the bottom of the list, with an unusual negative black-market premium. This negative premium suggests that market participants think the bolivar will appreciate relative to the greenback, and that individuals are willing to pay a premium to obtain bolivars on the black-market. 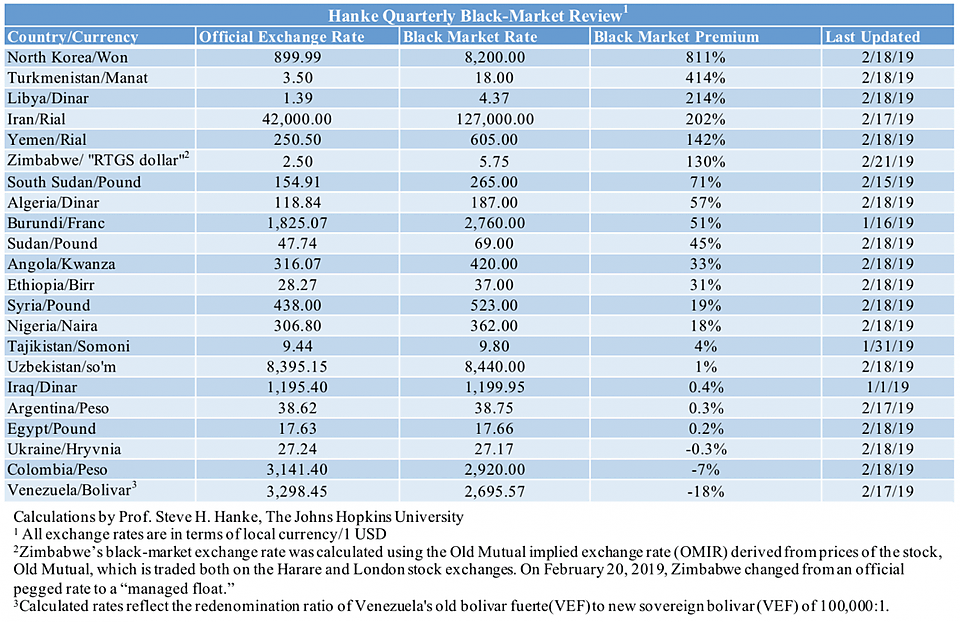 Just why do countries impose restrictions and controls on foreign exchange markets and restrict free convertibility? In most cases, controls are seen as a way to cool off hot money and conserve official foreign exchange reserves.

So, the temptation to turn to exchange controls in the face of disruptions caused by hot money flows is hardly new. In the modern era, Tsar Nicholas II was the first to pioneer limitations on convertibility. In 1905, he ordered the State Bank of Russia to introduce a limited form of exchange control to discourage speculative purchases of foreign exchange. The bank did so by refusing to sell foreign exchange, except where it could be shown that it was required to buy imported goods. Otherwise, foreign exchange was limited to 50,000 German marks per person. The Tsar's rationale for exchange controls was that of limiting hot money flows, so that foreign reserves and the exchange rate could be maintained.

As we move to reflect on Zimbabwe, or any of the other countries in the Hanke Quarterly Black Market Review, we must lift a page from Nobel laureate Friedrich Hayek's 1944 classic, The Road to Serfdom:

The extent of the control over all life that economic control confers is nowhere better illustrated than in the field of foreign exchanges. Nothing would at first seem to affect private life less than a state control of the dealings in foreign exchange, and most people will regard its introduction with complete indifference. Yet the experience of most Continental countries has taught thoughtful people to regard this step as the decisive advance on the path to totalitarianism and the suppression of individual liberty. It is, in fact, the complete delivery of the individual to the tyranny of the state, the final suppression of all means of escape — not merely for the rich but for everybody.

Hayek’s message about convertibility has regrettably been overlooked by many contemporary economists. Exchange controls are nothing more than a ring fence within which governments can expropriate their subjects’ property. Open exchange and capital markets, in fact, protect the individual from exactions, because governments must reckon with the possibility of capital flight.

From this, it follows that the imposition of exchange controls leads to an instantaneous reduction in the wealth of the country, because all assets decline in value. To see why, it is important to understand how assets are priced.

The value of any asset is the sum of the expected future installments of income it generates discounted to the present value. For example, the price of a stock represents the value to the investor now of his share of the company’s future cash flows, whether issued as dividends or reinvested. The present value of future income is calculated using an appropriate interest rate that is adjusted for the various risks that the income may not materialize.

President Emmerson Mnangagwa has proclaimed that Zimbabwe is “open for business.” This refrain rings hollow in the face of Zimbabwe’s exchange controls and its new currency, the RTGS dollar.

If Zimbabwe wants to be open for business and wants its own sound currency, it should adopt a currency board. That would make Zimbabwe’s currency a clone of the U.S. dollar, or some other suitable anchor, such as gold. A currency board would mandate that exchange controls be thrown in the dustbin. Free convertibility would reign, and so would low inflation rates and higher asset valuations. The “open for business” sign would be the real deal.