During Zimbabwe’s hyperinflation episode (2007-2008), the Reserve Bank of Zimbabwe failed to report an accurate measure of inflation rates. When episodes of hyperinflation occur, the only feasible and reliable way to measure the inflation rate is via the application of Purchasing Power Parity (PPP). To do that, one needs data on the exchange rate between the domestic currency and a stable international currency. This was not feasible in Zimbabwe. The Zimbabwe dollar was not traded on an organized exchange that reported exchange rates, and the use of black-market exchange rates was not feasible either.

However, the organized stock market in Harare did provide prices that allowed for the calculation of implied Zimbabwe dollar exchange rates. One stock, Old Mutual, was, and still is, listed on both the London Stock Exchange and the Zimbabwe Stock Exchange. Each share of Old Mutual commands the same claim on the company’s earnings and assets, irrespective of the market it is traded on. Therefore, given arbitrage and PPP, the ratio of the Old Mutual share price in Harare to that in London equaled the Zimbabwe dollar/sterling exchange rate.

After doing so, we find that Zimbabwe is experiencing hyperinflation for the second time in less than ten years. Hyperinflation occurs when the monthly inflation rate reaches 50% per month and remains above that rate for at least 30 consecutive days. This initial threshold was breached on September 14, 2017, and has remained above this rate since then.  Thus, Zimbabwe is in the throes of an ignominious hyperinflation, in which the monthly rate of inflation is 77% and the annual rate is 348%, as of October 25, 2017.

The two charts below and a detailed study, which I co-authored with my assistant Erik Bostrom, tell this tragic story. 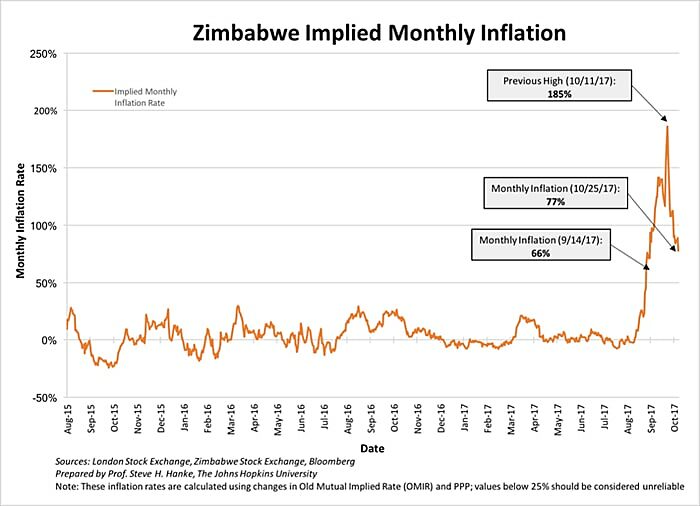 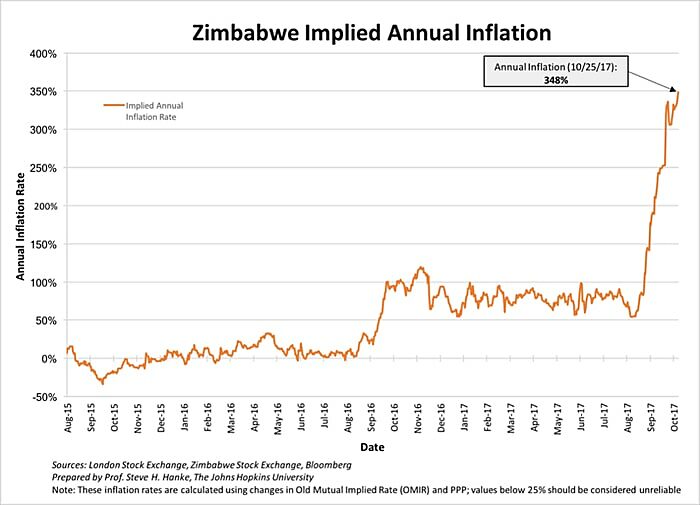 The government's creation of the New Zim dollar to finance its fiscal deficit has resulted in an explosion of the money supply. As I previously predicted, the New Zim dollar is rapidly becoming worthless, and with that, hyperinflation has yet again reared its ugly head. To see where Zimbabwe stands in the rogues' gallery of countries that have experienced hyperinflation, an amended and abbreviated Hanke-Krus World Hyperinflation Table is presented below.