Venezuela’s currency, the bolivar, has tanked. Just take a look at the ugly chart below. 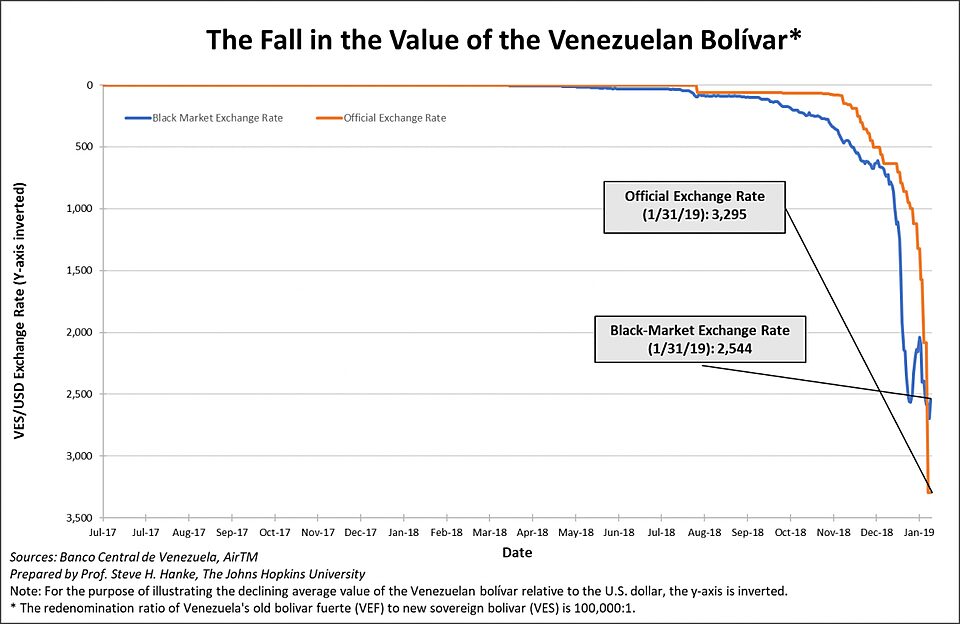 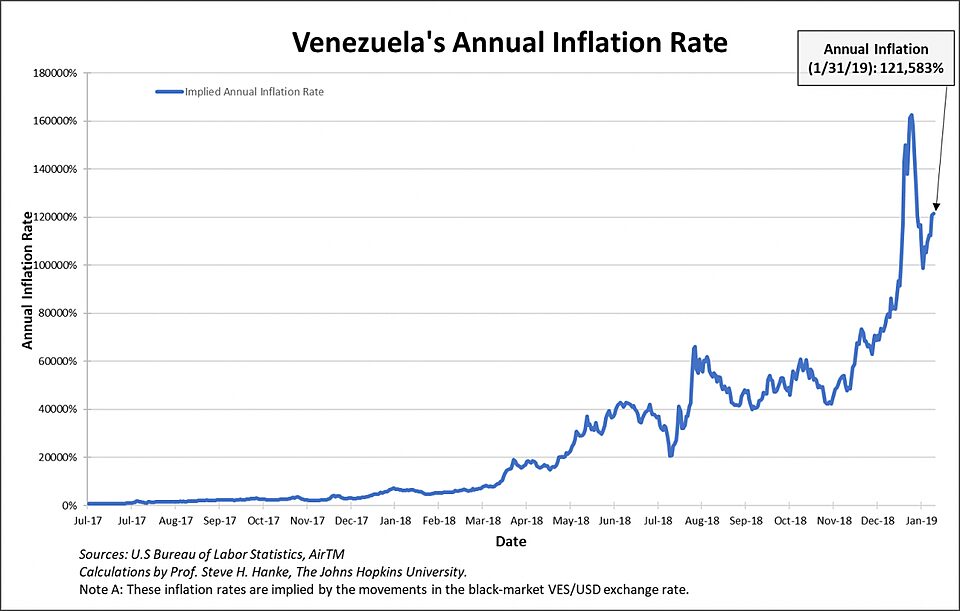 So, it's clear what Venezuela's big problem is: hyperinflation. The first order of business for any new government in Venezuela is to slay the hyperinflation dragon. This can be done within 24 hours with the introduction of a currency board.

Currency boards have existed in about 70 countries, and none have failed. The first one was installed in the British Indian Ocean colony of Mauritius in 1849. By the 1930s, currency boards were widespread among the British colonies in Africa, Asia, the Caribbean, and the Pacific Islands. They have also existed in a number of independent countries and city-states, such as Danzig and Singapore. One of the more interesting currency boards was installed in North Russia on November 11, 1918, during the civil war. Its architect was none other than John Maynard Keynes, who was a British Treasury official at the time.

To smash inflation and establish stability, a currency board for Venezuela would do the trick. Indeed, that's why I proposed a currency board to Venezuela's President Rafael Caldera when I was his adviser from 1995-96. The details of what I proposed then, and now, are contained in a book I co-authored with Kurt Schuler, Juntas Monetarias para países en desarrollo: Dinero, inflación y estabilidad económica, which was published in a second edition in 2015 by CEDICE in Caracas.

Before proceeding, it is important to mention Argentina's bout of hyperinflation that peaked in July 1989, particularly since the currency reform that crushed Argentina's inflation is universally mischaracterized and misunderstood.

Like currency board arrangements, the Convertibility System maintained a fixed exchange rate between the peso and its anchor currency, the U.S. dollar. That nominal anchor crushed hyperinflation and prevented inflation from rearing its ugly head. Indeed, the consumer price index at the end of 2001 was about where it was in 1994. By smashing inflation, Convertibility gave Menem the credibility he desperately needed to carry out economic reforms.

The Convertibility System was not trouble-free, however. Its deviations from currency board orthodoxy allowed it to behave more like a central bank than a true currency board. These deviations were significant, and prompted me to pen an op-ed "Argentina Should Abolish Its Central Bank." It was published in the Wall Street Journal on October 25, 1991. As I wrote then: "To lock in the Menem-Cavallo achievements and permanently remove skepticism from the Argentine monetary scene, Argentina should abolish its Central Bank and replace it with a currency board."

Alas, the Convertibility System, after killing a hyperinflation and ushering in a decade-long economic boom, met its Waterloo in 2001. Just as I had anticipated in my 1991 Wall Street Journal piece, the Banco Central de la República Argentina (BCRA) used Convertibility's deviations from currency board orthodoxy to engage in discretionary monetary policies. In the end, the BCRA did just what it had always done. It made a mess out of monetary policy and created a currency crisis.

Today, Venezuela should do exactly what Bulgaria did in 1997. A currency board would make the bolivar sound—a clone of the U.S. dollar, the world's most important currency. With that, inflation would be smashed within 24 hours and stability established. And, while stability might not be everything, everything is nothing without stability. The political forces behind the introduction of a currency board would be seen as credible in the eyes of Venezuelans. By amassing a huge stock of political capital for slaying the hyperinflation dragon, the politicians who introduce the currency board would be able to then begin to clean up Venezuela's other messes. But, if the politicians fail to kill inflation first, there will be no successful reforms. That's why a currency board is a vital first step for Venezuela.