Skip to main content
Live Now
This article appeared on Forbes​.com on May 29, 2017.
TOP

In the months since President Trump was elected, consumer and business confidence have soared, and the stock markets have, too. Many are betting that much‐​needed supply‐​side tax reforms and deregulation will be rabbits that Trump pulls out of his hat. But, economic growth remains tepid, and political storm clouds are gathering in Washington, D.C.

To date, there is so much noise and so little signal from Washington that stock prices have not been knocked off course. But, this will probably not last. Regime uncertainty is a bad omen for trust, confidence and markets. The course of economic activity depends in part on the level of trust and confidence the public has in its elected officials and policy makers. Indeed, members of the Cambridge School of Economics, which was founded by Alfred Marshall (1842–1924), all concluded the fluctuations in business confidence are the essence of the business cycle. As John Maynard Keynes argued in the General Theory:

The state of confidence, as they term it, is a matter to which practical men always pay the closest and most anxious attention. But economists have not analyzed it carefully and have been content, as a rule, to discuss it in general terms. In particular it has not been made clear that its relevance to economic problems comes in through its important influence on the schedule of the marginal efficiency of capital. There are now two separate factors affecting the rate of investment, namely, the schedule of the marginal efficiency of capital and the state of confidence. The state of confidence is relevant because it is one of the major factors determining the former, which is the same thing as investment demand schedule.

Frederick Lavington (1881–1927), a Fellow of Emmanuel College and the most orthodox of the Cambridge economists, went even further in his 1922 book, The Trade Cycle. Lavington concluded that, without a “tendency for confidence to pass into errors of optimism or pessimism,” there would not be a business cycle.

The war being waged in Washington will eventually take its toll on the public’s level of trust and confidence in the political elites.

The war being waged in Washington will eventually take its toll on the public’s level of trust and confidence in the political elites. This toll will result from what is called “regime uncertainty.” Regime uncertainty relates to the likelihood that investors’ private — namely, the flows of income and services it yields — will be attenuated by government action. As regime uncertainty is elevated, private investment is notched down from where it would have been. This can result in a business‐​cycle bust and even economic stagnation.

Robert Higgs, in a series of careful studies, was able to identify why private investment was kept underwater during the Great Depression. The source of the problem, according to Higgs, was regime uncertainty. Higgs’s diagnosis is best summarized in his own words from Against Leviathan: Government Power and a Free Society (2004).

In the face of the interventionist onslaught, the U.S. economy between 1930 and 1940 failed to add anything to its capital stock: net private investment for that eleven‐​year period totaled minus $3.1 billion. Without ongoing capital accumulation, no economy can grow.…

Thanks to Scott R. Baker of Northwestern University, Nicholas Bloom of Stanford University and Steven J. Davis of the University of Chicago, we have a measure or proxy for Higgs’s regime uncertainty. The chart below shows that, with the election of Donald Trump, the U.S. Policy Uncertainty Index surged. It then backed off a bit, but remains elevated. This will eventually take its toll on confidence and the markets. Use the calm before the storm to act prudently. 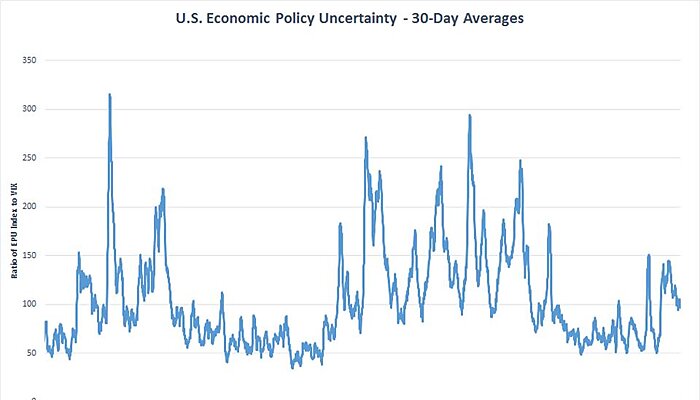