What follows are six questions and answers that were wedged between cocktails and a dinner hosted by Karl J. Feitelberg, Founder and Chairman of Sterling Resources Ltd. at the Castle Hill Inn, Newport, R.I. on July 24, 2017.

1. Question: What were the two greatest economic catastrophes in the U.S. of the last 100 years?

Answer: The Great Depression (1929-1933) and the Great Recession (2007-2009). It is worth mentioning that most Americans date the start of the Great Recession as 2008, when Lehman Brothers collapsed. In fact, the crisis started on August 9, 2007. That’s when France’s BNP Paribas barred investors from accessing three money-market funds that had subprime mortgage exposure, citing a “complete evaporation of liquidity.” With that, Northern Rock, a bank that was formerly a building society, started to wobble, and eventually faced the first bank run in the U.K. since the Great Depression. This solvent institution eventually collapsed because the bank of England failed to make “lender of last resort” loans efficiently and promptly. This fiasco was clearly the result of government, not market, failure. These troubles eventually worked their way across the pond.

2. Question: What did the Great Depression and the Great Recession have in common?

Answer: Huge economic slumps accompanied both. Also, the diagnoses and prescriptions were the same. Both catastrophes were laid at the feet of market failure (read: the capitalist system is inherently flawed and prone to failure). To correct for the alleged market failure associated with the Great Depression, Roosevelt came up with the New Deal.  In short, the prescription was a massive increase in the scope and scale of the government’s reach and involvement in the economy. This type of intrusive response has also followed the Great Recession, ushering in a plethora of government regulations, particularly those that affect banks and financial institutions. And why not? After all, the politicians told us that banks (and bankers) caused the Great Recession (read: market failure).

It is interesting to note that about the only ones who are happy about Dodd-Frank and the 1000s of regulations that it has given birth to are the members of an unholy alliance: the bank regulators and compliance officers. Yes, Dodd-Frank has produced “jobs for the boys!”

3. Question: Why were the diagnoses of and prescriptions for the Great Depression and Great Recession so completely wrong?

Answer: For a diagnosis of the course of economic activity, one needs a model. So, just what determines national income? What is a reliable model? Well, money dominates. The quantity of money, broadly defined, will set the course for nominal economic activity (read: real growth plus inflation). The chart below shows that, in the major economies of the world, there is a rather tight relationship between the growth rates in money, broadly defined, and nominal GDP growth. 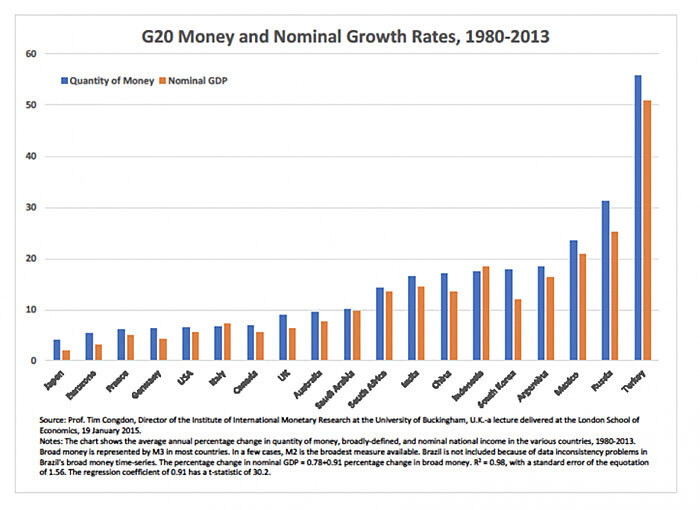 Never mind. The Federal Reserve (the Fed) was not blamed at the time. Instead, capitalism was fingered, and in consequence we had the New Deal. Misguided government policies not only caused the Great Depression, but also resulted in a deeper and longer depression. As Robert Higgs summarizes in his book, Against Leviathan: Government Power and a Free Society, Washington D.C. compounded the monetary problems generated by the Fed. The New Deal created regime uncertainty. In the words of Higgs:

In the face of the interventionist onslaught, the U.S. economy between 1930 and 1940 failed to add anything to its capital stock: net private investment for that eleven‐​year period totaled minus $3.1 billion. Without ongoing capital accumulation, no economy can grow….

In the Great Recession, we witnessed the same pattern as we did in the Great Depression. The money supply, broadly measured (M3), was growing at a year-over-year clip of 17.4% in March of 2008. From that peak rate, it plunged to a negative 6.1% (yr/yr) in June 2010. With this plunge in the money supply, nominal GDP plunged, too. Both inflation and real growth came down hard—not because of market failure, but because of government failure.

4. Question: What were the contours of the key markers in the Great Recession?

Answer: Like the Great Depression, the government was quick to blame flaws in the capitalist system and the alleged excesses they created. Bankers and banks came in for a thrashing. To make the economy safe from these alleged culprits, the Dodd-Frank legislation was passed, Basel III was imposed, and a plethora of other regulations and mandates were introduced to the financial industry.

How did such a misdiagnosis occur? By ignoring the monetary interpretation of national income determination, the “Doctors” will always misdiagnose. Let’s look at what was happening: In the July 2008 – November 2008 period, the U.S. dollar soared by 25% against the euro, the price of gold plunged by 19%, and the price of oil dropped by 57%. Also, the consumer price index went from its elevated level of 5.6% per year in July 2008 to 0% in January 2009, and further dropped to a negative 2.1% in July 2009. All these price indicators should have signaled that the Fed was way too tight with the money supply reins during the early phase of the Great Recession. But, Chairman Bernanke and his colleagues, the central bank, failed to act. This does not represent a case of market failure. No. It represents government failure—the application of a misguided set of pro-cyclical economic policies.

For a detailed and correct diagnosis of the Great Recession, allow me to recommend a book that has just been released by Tim Congdon (ed.), Money in the Great Recession: Did a Crash in Money Growth Cause the Global Slump. Among others, I contributed the chapter on the U.S. “The Basel Rules and the Banking System: An American Perspective.”

5. Question: Where are we now?

Answer: Aggregate demand, which is represented by Final Sales to Domestic Purchasers in the U.S. is shown below. As can be seen, we had the Great Recession, and we remain, ten years after the start of the slump, in a growth recession. We are growing, but still growing at below the trend rate of growth. Thanks to Washington’s regulatory zeal that has kept bank credit (the major contributor to broad money, accounting for over 80% of its total) squeezed. Yes, during a growth recession the U.S. has endured a credit crunch (read: thanks to government failure). If we look at the money supply growth, measured by M3, it remains “slow” and has been slowing down slightly, as the Fed starts a “tightening” cycle. In addition, there is a considerable amount of regime uncertainty in Washington, D.C. Both of these factors pose cause for concern. Indeed, there will probably be no “Trump Boom.” 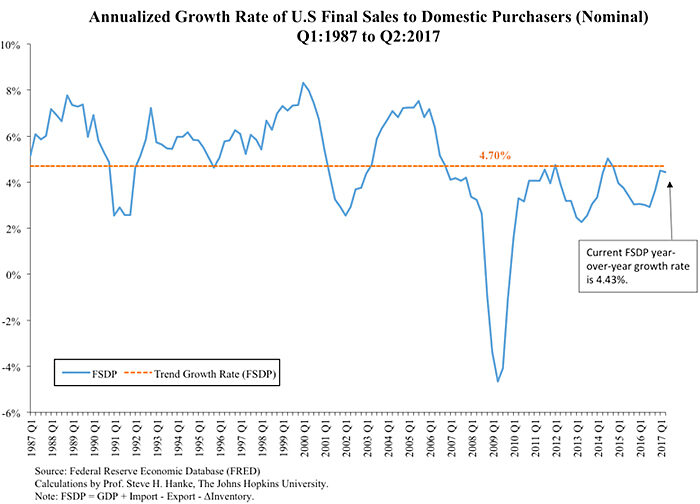 6. Question: Where should one invest?

Answer: This is always a difficult one to answer. That said, for the risk averse investor, I like Treasury Inflation Protected Securities (TIPS).  Inflation expectations will eventually start to change from deflationary to inflationary, and when they do, TIPS, which are mispriced at the present, will generate a nice capital gain. For those with larger risk appetites, there are several special situations available. For example, one promising case is represented by distressed debt in India. Lastly, there are always mispriced equities out there for the picking. That is, if you have the right valuation methodology, which I think I do. Indeed, by applying my “Probabilistic Discounted Cash Flow Model,” which I have developed over the past 25 years, my class at Johns Hopkins, over the past two years, has been able to pick stocks that have generated returns that are almost double those of the S&P 500.