The Russian ruble ended 2014 in bad shape. Not as bad as the Ukrainian hryvnia or the Venezuelan bolivar, but bad, nevertheless. For most of 2014, Russia faced an ever‐​increasing ratcheting up of economic sanctions. These set the stage for what was to come late in the year: the collapse of oil prices and the announcement on November 10th that the ruble would be allowed to float. When combined, these three ingredients created a perfect storm. 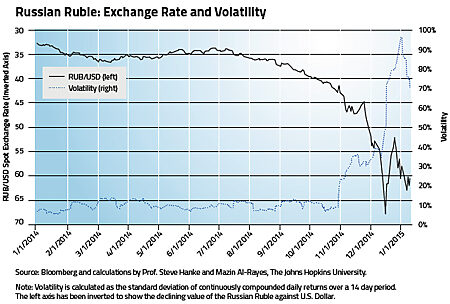 In the storm, the ruble fell like a stone. In addition to witnessing most of the ruble’s purchasing power vanish, the Russians saw the volatility of their currency explode, reflecting the increased uncertainty of the ruble’s course. Not a pretty picture (see the accompanying chart). But, one that can be brought into some focus by reflecting on analogies with the Indonesian financial crisis of 1997-98.

On August 14, 1997, shortly after the Thai baht collapsed on July 2, Indonesia floated the rupiah. This prompted Stanley Fischer, Deputy Managing Director of the International Monetary Fund, to proclaim that “the management of the IMF welcomes the timely decision of the Indonesian authorities. The floating of the rupiah, in combination with Indonesia’s strong fundamentals, supported by prudent fiscal and monetary policies, will allow its economy to continue its impressive economic performance of the last several years.”

If Russia wants to avoid further ruble turmoil, it should tether the ruble tightly to the U.S. dollar.

By late January 1998, President Suharto realized that the IMF medicine was not working and sought a second opinion. In February, I was invited to offer that opinion and began to operate (pro bono as usual) as Suharto’s Special Counselor. Although I did not have any opinions on the Suharto government, I did have definite ones on the matter at hand. After the usual open discussions at the President’s private residence, I proposed as an antidote an orthodox currency board in which the rupiah would be fully convertible into the U.S. dollar at a fixed exchange rate. On the day that news hit the street, the rupiah soared by 28 percent against the U.S. dollar. These developments seemed to infuriate the U.S. government and the IMF.

Ruthless attacks on the currency board idea and the Counselor ensued. Suharto was told in no uncertain terms — by both the President of the United States, Bill Clinton, and the Managing Director of the IMF, Michel Camdessus — that he would have to drop the currency board idea or forego $43 billion in foreign assistance. He was also aware that his days as President would be numbered if the rupiah was not stabilized.

Economists jumped on the bandwagon too. Every half‐​truth and non‐​truth imaginable was trotted out against the currency board idea. In my opinion, those oft‐​repeated canards were outweighed by the full support for an Indonesian currency board (which received very little press) by four Nobel Laureates in Economics: Gary Becker, Milton Friedman, Merton Miller, and Robert Mundell.

Why all the fuss over a currency board for Indonesia? Merton Miller understood the great game immediately. As he wrote when Mrs. Hanke and I were in residence at the Shangri‐​La Hotel in Jakarta, the Clinton administration’s objection to the currency board was “not that it wouldn’t work but that it would, and if it worked, they would be stuck with Suharto.” Much the same argument was articulated by Australia’s former Prime Minister Paul Keating: “The United States Treasury quite deliberately used the economic collapse as a means of bringing about the ouster of President Suharto.” Former U.S. Secretary of State Lawrence Eagleberger weighed in with a similar diagnosis: “We were fairly clever in that we supported the IMF as it overthrew [Suharto]. Whether that was a wise way to proceed is another question. I’m not saying Mr. Suharto should have stayed, but I kind of wish he had left on terms other than because the IMF pushed him out.” Even Michel Camdessus could not find fault with these assessments. On the occasion of his retirement, he proudly proclaimed: “We created the conditions that obliged President Suharto to leave his job.”

To depose Suharto, two deceptions were necessary. The first involved forging an IMF public position of open hostility to currency boards. This deception was required to convince Suharto that he was acting heretically and that, if he continued, it would be costly. The IMF’s hostility required a quick about‐​face: Less than a year before the Indonesian uproar, Bulgaria (where I was President Stoyanov’s advisor) had installed a currency board on July 1, 1997 with the enthusiastic endorsement of the IMF, and Bosnia and Herzegovina (where I advised the government on currency board implementation) had followed suit under the mandate of the Dayton Peace Agreement, and with IMF support, on August 11, 1997.

Shortly after Suharto departed, the IMF’s currency board deception became transparent. On August 28, 1998, Michel Camdessus announced that the IMF would give Russia the green light if it chose to adopt a currency board. This was followed on January 16, 1999 with a little‐​known meeting in Camdessus’ office at the IMF headquarters in Washington, D.C. The assembled group included IMF top brass, Brazil’s Finance Minister Pedro Malan, and the central bank’s Director of Monetary Policy Francisco Lopes. It was at that meeting that Camdessus suggested that Brazil adopt a currency board.

The second deception involved the widely‐​circulated story which asserted that I had proposed to set the rupiah’s exchange rate at an overvalued level so that Suharto and his cronies could loot the central bank’s reserves. This take‐​the‐​money‐​and‐​run scenario was the linchpin of the Clinton administration’s campaign against Suharto. It was intended to “confirm” Suharto’s devious intentions and rally international political support against the currency board idea and for Suharto’s ouster.

The overvaluation story was enshrined by the Wall Street Journal on February 10, 1998. The Journal reported that Peter Gontha had summoned me to Jakarta and that I had prepared a working paper for the government recommending that the rupiah-U.S. dollar exchange rate be set at 5,500. This was news to me. I did not meet, nor know of, Peter Gontha at that time, nor had I authored any reports about Indonesia or proposed an exchange rate for the rupiah.

I immediately attempted to have this fabrication corrected. It was a difficult, slow, and ultimately unsatisfactory process. Although the Wall Street Journal reluctantly published a half‐​baked correction on February 14, the damage had been done.

The Journal’s original fabrication (or some variant of it) was repeated in virtually every major magazine and newspaper in the world, and it continues to reverberate to this day, even in so‐​called scholarly books and journals. For example, in his 2000 memoir, From Third World to First, The Singapore Story: 1965–2000, Lee Kuan Yew asserts that “in early February 1998, Bambang, the president’s son, brought Steve Hanke, an American economics professor from Johns Hopkins University, to meet Suharto to advise him that the simple answer to the low exchange value of the rupiah was to install a currency board.” This bit of misinformation was a surprise, since I have never had any contact with Bambang Suharto. But, it is not just politicians who fail to “fact check” their assertions. Theodore Friend’s 2003 tome, Indonesian Destinies, misspells my name and then proceeds to say that I “counseled the [Suharto] family to peg the exchange rate at 5000.”

Setting the record straight has been complicated by the official spinners at the IMF. Indeed, they have been busy as little bees rewriting monetary history to cover up the IMF’s mistakes, and Indonesia represents one of its biggest blunders. To this end, the IMF issued a 139‐​page working paper “Indonesia: Anatomy of a Banking Crisis: Two Years of Living Dangerously 1997–99” in 2001. The authors include a “politically correct” version of the currency board episode, asserting among other things, that I counseled President Suharto to set the rupiah‐​dollar exchange rate at 5000. This pseudo scholarly account, which includes 115 footnotes, fails to document that assertion because it simply cannot be done. That official IMF version of events also noticeably avoids referencing any of my published works or interviews based on my Indonesian experience.

This episode and its manipulations are not unique in the political world. It is useful, though, after time and events unfold, to set facts straight in order to understand the situation then and now. Other countries are currently experiencing some of the vagaries of similar treatments. Let’s hope that they, as well as the rest of us, do not have to pay later for such blunders and mistakes. Indeed, that story should be a sobering lesson.

If Russia wants to avoid further ruble turmoil, further impoverishment of its citizens, and potential political upheavals, it should tether the ruble tightly to the U.S. dollar. That’s what the big oil producers in the Persian Gulf region do — and for good reasons.