With the Wall Street sell off of last Friday and today’s further plunge, many are playing fast and loose with the term “bubble.” Bubble, although widely bandied about, is a fuzzy term without a solid operational definition. So, if it is little more than a rhetorical device, why is it widely used? According to Peter Garber, the authority on so‐​called bubbles (read: Dutch tulipmania, the Mississippi Bubble, and the South Sea Bubble), bubble myths are rhetorical weapons used to argue the markets are “crazy” and need to be more severely regulated.

There is no better antidote for all the myth-making associated with bubble rhetoric than Garber's authoritative Famous First Bubbles: The Fundamentals of Early Manias (The MIT Press, 2001). It is a thin, well-researched volume — one that pops many bubbles, so to speak. And unlike most scholarly work, it is well written, and entertaining.

No less than Alan Greenspan has recently reached into his bag of tricks to pull out the rhetorical bubble. The Maestro made these remarks last week while on Bloomberg Television: "I think there are two bubbles. We have a stock market bubble and we have a bond market bubble…I think [at] the end of the day the bond market bubble will eventually be the critical issue."

Recall, that it was former Fed Chairman Greenspan who uttered the words "irrational exuberance" during a speech he delivered at the American Enterprise Institute in 1996. The Maestro thought irrationality was driving the market and bubbles were being blown.

But, as Peter Garber concludes in a devastating critique: "Three years later, with the stock market fifty percent higher, in testimony on February 23, 1999, Mr. Greenspan was asked whether he thought there was still irrational exuberance. His reply was 'That is something you can only know after the fact.' Thus, he removed all meaningful content from the concept."

So, is the U.S. stock market in bubble territory (read: priced above a level that can be justified by economic fundamentals)? For that I employ Dr. X's Bubble Detector — a concept that was conveyed to me in an August 1996 letter by a late Nobel laureate in economics.

So, just what is Dr. X's bubble detector? It is the wealth-to-income ratio for stocks divided by the same ratio for bonds. The wealth-to-income ratio indicates the length of time it takes for a constant flow of income to "purchase" a given stock of income-producing assets — 1,000 shares of Royal Dutch Shell, say, or 1,000 T-Bills. As the ratio increases, more time is required to purchase a source of income, implying that assets are becoming more expensive relative to income. Therefore, the bubble detector essentially measures the value of equities relative to that of fixed income securities.

As a proxy for the wealth/income ratio for stocks, Dr. X used the ratio of the Standard & Poor's 500 (S&P 500) to personal income per capita. If stock prices rise and income stays the same, the wealth/income ratio for stocks increases, and it takes more time to purchase a given quantity of stocks. As of December 2017, which is the most current data point calculable for the bubble detector, this component is $2,637.6/$50,873, or 0.05185. The proxy for bonds is the reciprocal of the ten-year Treasury bill rate, or 1/(interest rate). This component is 1/2.37, or 0.4219 (see the chart below). 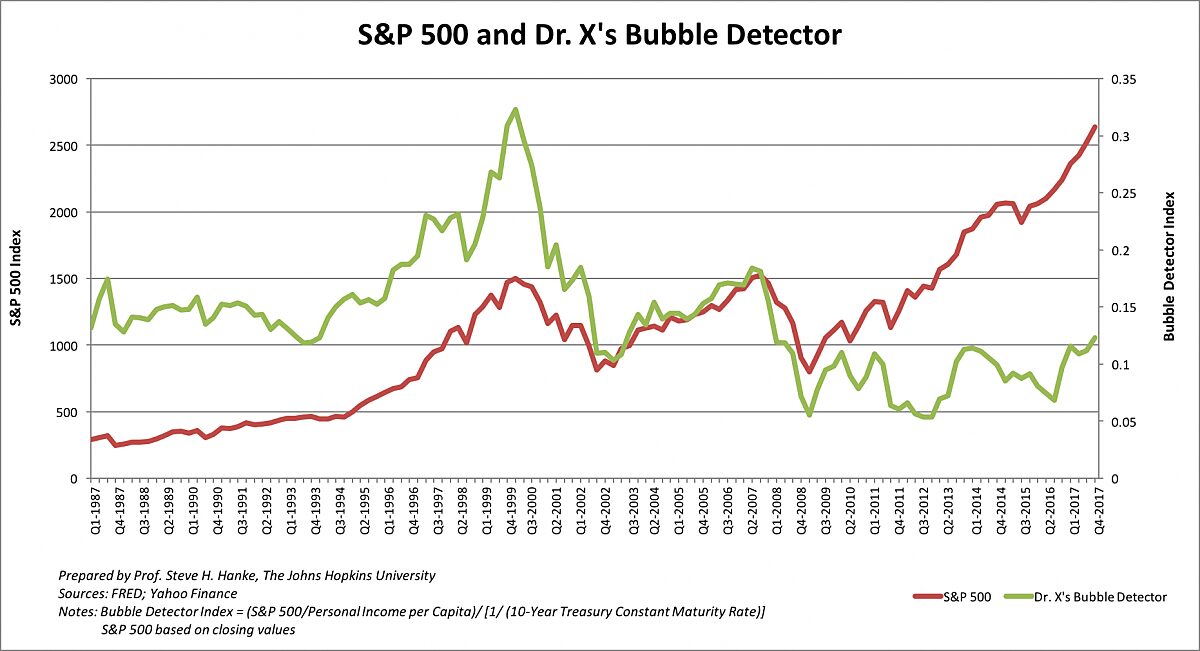 That said, it's worth recounting the late 1920s. That's when Yale Professor Irving Fisher, perhaps the greatest economist of his era, confidently proclaimed that stock prices were at a "permanently high plateau." Fisher, then 62 and a man of strong convictions, staked his reputation and fortune on an unwavering optimism about the economy and stock prices. Alas, the 1929 crash vaporized Fisher's $10 million fortune and cast a cloud over his reputation.