During my testimony in April, 2017 before the U.S. House of Representatives Committee on Foreign Affairs, I stressed that, to establish stability and turn Venezuela’s economy around, runaway inflation must be stopped in its tracks. After all, stability might not be everything, but everything is nothing without stability. 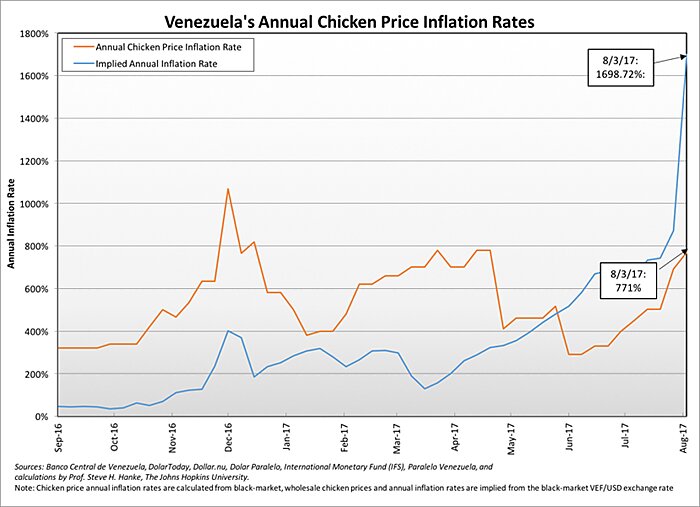 There are only two sure-fire ways to kill Venezuela’s inflation and establish the stable conditions that are necessary to carry out much-needed economic reforms. One way would be to dump the bolivar and officially dollarize the economy, an option I covered in a Forbes piece in August, “Stop Venezuela’s Economic Death Spiral — Dollarize, Now.”

Just what is a currency board? An orthodox currency board issues notes and coins convertible on demand into a foreign anchor currency at a fixed rate of exchange. It holds low-risk, interest-bearing bonds denominated in the anchor currency as reserves. The reserve levels (both floors and ceilings) are set by law and are equal to 100%, or slightly more, of its monetary liabilities. A currency board generates profits from the difference between the interest it earns on its reserve assets and the expense of maintaining its liabilities.

A currency board cannot issue credit. It cannot act as a lender of last resort or extend credit to the banking system. It also cannot make loans to the fiscal authorities and state-owned enterprises. Critically, a currency board imposes a hard budget constraint and discipline on the economy.

A currency board requires no preconditions for monetary reform and can be installed rapidly. No reforms of government finances, state-owned enterprises, and trade are necessary for a currency board to begin to issue currency.

It is important to mention that, at the turn of the century, the currency board idea became engulfed in controversy. Thanks to Argentina. What Argentina termed “Convertibility” was introduced in April, 1991 to stop inflation, which it did. The system had certain features of a currency board: a fixed exchange rate, full convertibility, and a minimum reserve cover for the peso of 100% of its anchor currency, the U.S. dollar. However, it had two major features that disqualified it from being an orthodox currency board. First, it had no ceiling on the amount of foreign assets held by the central bank relative to the central bank’s monetary liabilities. As a result, the central bank could engage in sterilization and neutralization activities, which it did. Secondly, it could hold and alter the level of domestic assets on its balance sheet. Consequently, Argentina’s monetary authority could engage in discretionary monetary policy, and it did so aggressively.

Because of these flaws, I penned an article that appeared in the October 25, 1991 edition of the Wall Street Journal. I concluded that, unless Argentina embraced orthodoxy and amended the Convertibility Law, the system would eventually collapse, which it did in 2002.

Just how can the international community support the currency board solution for Venezuela’s runaway inflation? For me, the answer harks back to 1992. That’s when I worked with the then-leader of the U.S. Senate, Bob Dole, and Senators Steve Symms and Phil Gramm, to draft U.S. legislation that would encourage countries with unstable currencies and runaway inflation to install currency boards. This legislation, (HR-5368, Law no. 102-391), was signed into law on October 6, 1992.

Without the adoption of a currency board (or dollarization), Venezuela will continue to be in the grip of an economic death spiral. Forget President Maduro's rhetoric: “Venezuela is going to implement a new system of international payments and will create a basket of currencies to free us from the dollar.” Indeed, the President has flunked every economic literacy test he has ever taken.