Venezuela’s economy has collapsed. This is the result of years of socialism, incompetence, and corruption, among other things. An important element that mirrors the economy’s collapse is Venezuela’s currency, the bolivar. It is not trustworthy. Venezuela’s exchange rate regime provides no discipline. It only produces instability, poverty, and the world’s highest inflation rate for 2018. Indeed, Venezuela’s annual inflation rate at the end of 2018 was 80,000%.

I observed much of Venezuela’s economic dysfunction first‐​hand during the 1995–96 period, when I acted as President Rafael Caldera’s adviser. But it wasn’t until 1999, when Hugo Chavez was installed as president, that the socialist seeds of Venezuela’s current meltdown started to be planted. This is not to say that Venezuela had not suffered from an unstable currency and elevated inflation rates before the arrival of President Chavez, but with his ascendancy, fiscal and monetary discipline further deteriorated and inflation ratcheted up. By the time President Nicolas Maduro arrived in early 2013, annual inflation was in triple digits and rising. Venezuela entered what has become a death spiral.

With the acceleration of inflation, the Banco Central de Venezuela (BCV) became an unreliable source of inflation data. Indeed, in December 2014, the BCV stopped reporting inflation statistics on a regular basis. To remedy this problem, the Johns Hopkins‐​Cato Institute Troubled Currencies Project, which I direct, began to measure Venezuela’s inflation back to 2013.

How can Venezuela pull itself out of its economic death spiral?

So, how do we accurately measure Venezuela’s inflation? There is only one reliable way. The most important price in an economy is the exchange rate between the local currency — in this case, the bolivar — and the world’s reserve currency, the U.S. dollar. As long as there is an active black market (read: free market) for currency and the data are available, changes in the black-market exchange rate can be reliably transformed into accurate measurements of countrywide inflation rates. The economic principle of purchasing power parity (PPP) allows for this transformation. And the application of PPP to measure elevated inflation rates is rather simple.

Beyond the theory of PPP, the intuition of why PPP represents the ‘gold standard’ for measuring inflation during hyperinflation episodes is clear. All items in an economy that is hyperinflating are either priced in a stable foreign currency (the U.S. dollar) or a local currency (the bolivar). If goods are priced in terms of bolivars, those prices are determined by referring to the dollar prices of goods, and then converting them to local bolivar prices after checking with the spot black-market exchange rate. Indeed, when the price level is increasing rapidly and erratically on a day-by-day, hour-by-hour, or even minute by-minute basis, exchange rate quotations are the only source of information on how fast inflation is actually proceeding. That is why PPP holds, and why we can use high-frequency (daily) data to calculate Venezuela’s inflation rate, even during episodes of hyperinflation.

Venezuela is the only country in the world that is currently experiencing the ravages of hyperinflation. As 2018 came to a close, Venezuela’s hyperinflation, which I am able to accurately measure by applying Purchasing Power Parity (PPP) to high frequency, reached 80,000%/yr, and has lasted 25 months. Devastating as it is, 80,000% is a far cry from the International Monetary Fund’s unbelievable end-of-the-year inflation forecast for Venezuela of 2,500,000%/yr. One should never forget that one can measure episodes of hyperinflation with great precision, but no one can reliability forecast their durations or magnitudes—a fact that has failed to penetrate the walls of the IMF’s insular bureaucracy. 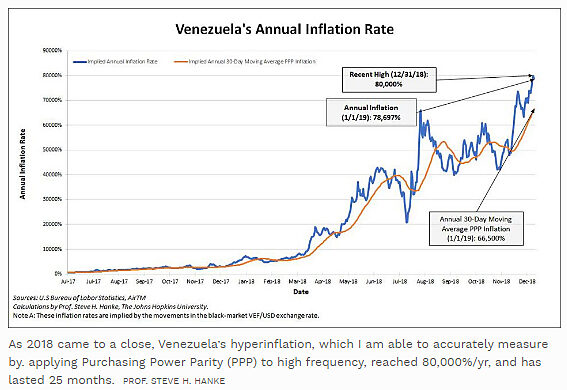 How can Venezuela pull itself out of its economic death spiral? Venezuela must officially dump the bolivar and adopt the greenback. Official “dollarization” is a proven elixir. I know because I operated as a State Counselor in Montenegro when it dumped the worthless Yugoslav dinar in 1999 and replaced it with the Deutsche mark. I also took part in the successful dollarization of Ecuador in 2001, when I was operating as an adviser to the Minister of Economy and Finance.

Countries that are officially dollarized produce lower, less variable inflation rates and higher, more stable economic growth rates than comparable countries with central banks that issue domestic currencies. There is a tried and true way to stabilize the economy, which is a necessary condition required before the massive task of life-giving reforms can begin. It is dollarization. Stability might not be everything, but everything is nothing without stability.

Just what does the Venezuelan public think of the dollarization idea? To answer that question, a professional survey of public opinion on the topic was conducted in March 2017 by Datincorp in Caracas. The results are encouraging: Sixty-two (62%) of the public favored dollarization. Since things have considerably deteriorated since that survey, my conjecture is that the proportion of Venezuelans favoring dollarization has substantially increased. It’s time for enlightened, practical politicians in Venezuela to embrace the dollarization idea. The fact of the matter is that the public has already spontaneously dollarized the economy.