Just what is Venezuela's inflation rate? Today, the annual inflation rate is 60,324%, and the monthly rate is 94%. How do I measure elevated inflation? The most important price in an economy is the exchange rate between the local currency — in this case, the bolivar — and the world's reserve currency, the U.S. dollar. As long as there is an active black market (read: free market) for currency and the black market data are available, changes in the black market exchange rate can be reliably transformed into accurate measurements of countrywide inflation rates. The economic principle of purchasing power parity (PPP) allows for this transformation. The application of PPP to measure elevated inflation rates is both simple and very accurate.

Evidence from Germany's 1920–23 hyperinflation episode — as reported by Jacob Frenkel in the July 1976 issue of the Scandinavian Journal of Economics – confirms the accuracy of PPP during hyperinflations. Frenkel plotted the Deutschmark/U.S. dollar exchange rate against both the German wholesale price index and the consumer price index (CPI). The correlations between Germany's exchange rate and the two price indices were very close to unity throughout the period, with the correlations moving to unity as the inflation rate increased.

Beyond the theory of PPP, the intuition of why PPP represents the ‘gold standard' for measuring inflation during episodes of hyperinflation is clear. Virtually all goods and services are either priced in a stable foreign currency (the U.S. dollar) or a local currency (the bolivar). In Venezuela, bolivar prices are determined by referring to the dollar prices of goods, and then converting them to local bolivar prices after observing the black market exchange rate. When the price level is increasing rapidly and erratically on a day-by-day, hour-by-hour, or even minute-by-minute basis, exchange rate quotations are the only source of information on how fast inflation is actually proceeding. That is why PPP holds and why I can use high-frequency data to calculate Venezuela's inflation rate. 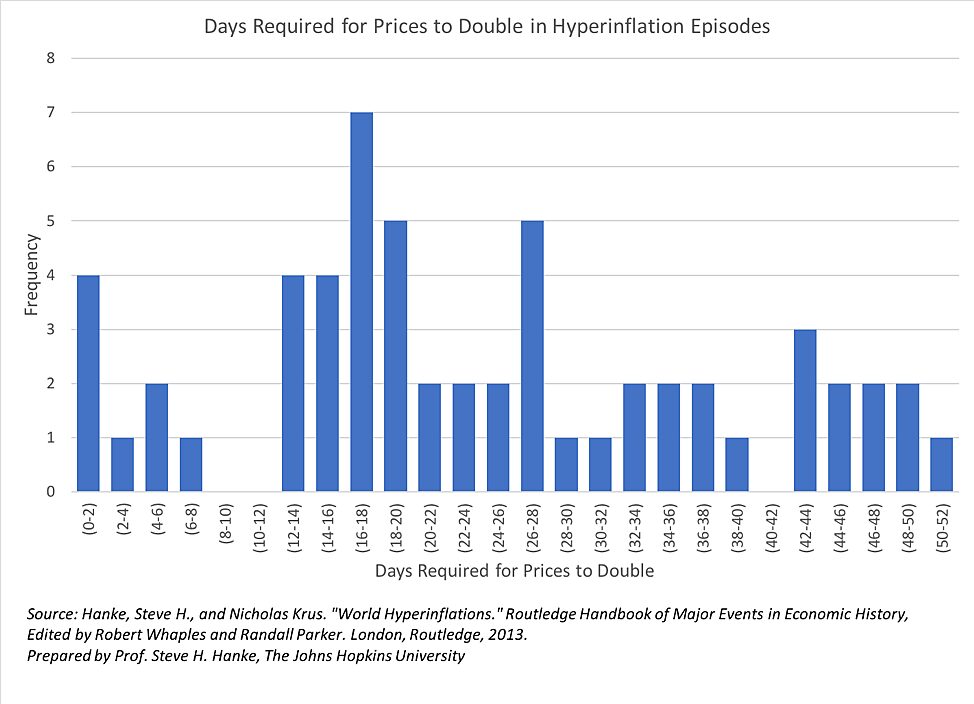 If one measures severity by the duration of a hyperinflation, Venezuela's hyperinflation, which started in November of 2016 and has yet to end, is rather severe.  It has lasted for twenty-four months and counting. As the frequency distribution below shows, there have only been seven hyperinflations that have lasted longer than Venezuela's. 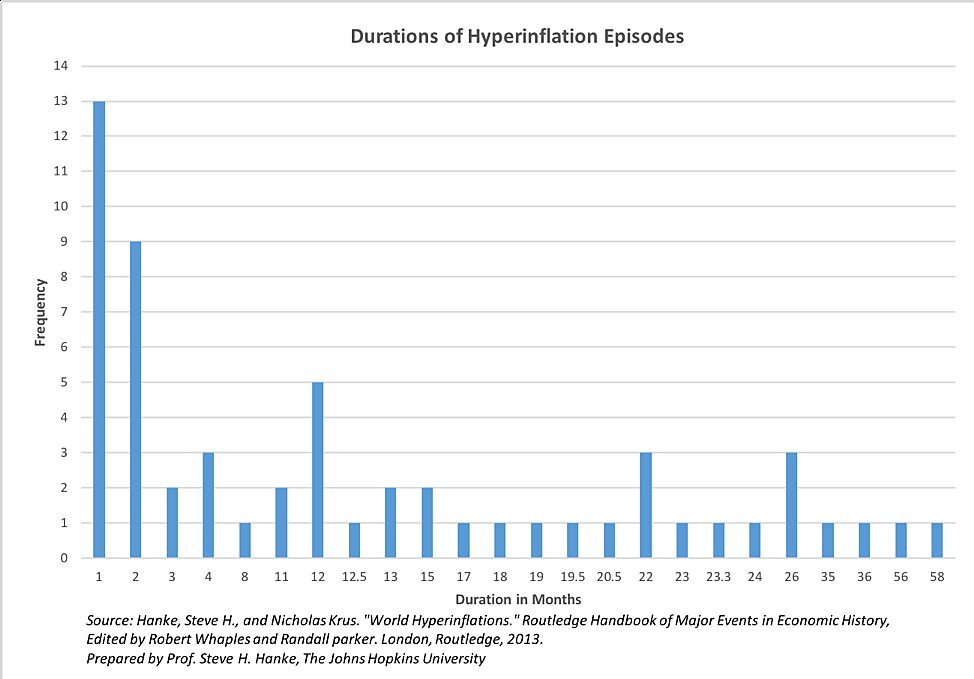 So much for the definition and accurate measurement of Venezuela's hyperinflation. What about forecasts for the course and duration of Venezuela's episode? Well, you can't reliably forecast what heights a hyperinflation will reach, or when those heights will be reached.

Surprisingly, that impossibility hasn't stopped the International Monetary Fund (IMF) from throwing economic science to the winds. Yes, the IMF has regularly been reporting what are, in fact, absurd inflation forecasts for Venezuela. These forecasts have been issued under the watchful eye of Alejandro Werner, the head of the IMF's Western Hemisphere Department. The chart below presents the IMF's finger-in-the-wind forecasts (read: nonsensical folly).

The only thing you can bet your boots on is that the press will dutifully report the IMF's forecasts that Venezuela's annual inflation rate will hit a whopping 2,500,000% by the end of 2018. Given that today's measured annual rate is only 60,324%, the IMF apparently expects that Venezuela will experience one of the world's greatest inflation surges ever recorded in history over the next two months.

Don't bet on it. Your odds are much worse than winning the Mega Millions Jackpot.