Skip to main content
Live Now
This article appeared on Forbes​.com on May 12, 2018.
TOP

The most important price in an economy is the exchange rate between the local currency and the world’s reserve currency — the U.S. dollar. As long as there is an active black‐​market (read: free market) for currency and the data are available, changes in the black‐​market exchange rate can be reliably transformed into accurate estimates of countrywide inflation rates—if the annual inflation rates exceed 25%. The economic principle of Purchasing Power Parity (PPP) allows for this transformation.

Using this principle, I compute implied annual inflation rates using high-frequency data and report them on a daily basis. For the countries that I monitor daily, the table below shows the annual rates for the eight countries with the highest inflation rates in the world.

At present, Venezuela is suffering from hyperinflation. It holds down the top spot on my list, with an annual inflation rate of 16,428%. Note that my measurement of the implied inflation rate is much higher than the widely reported International Monetary Fund’s (IMF) end-of-year forecast of 12,870% (13,000% rounded). I measure; the  IMF foolishly forecasts. A comparison of my measurements with the IMF’s projections for the other seven countries’ year-end annual inflation rates shows that the IMF's projections are way off the mark. Indeed, my current measured inflation rates for “today” exceed those that the IMF projects, with the exception of South Sudan's, by a wide margin. Given these large divergences and the IMF’s poor record of forecasting inflation in countries experiencing elevated inflation rates, one wonders why the financial press reports the IMF forecasts, and why it does so with such reverence.

Venezuela’s death spiral continues to spin, as hyperinflation slashes the value of the bolivar.

Let’s take a closer look at just how rapidly Venezuela’s prices are rising, and how they stack up against other hyperinflation episodes in Latin America (see the table below). Last month, the monthly inflation rate—yes, the monthly—reached a new high of 234%. At this rate, prices doubled every 17.5 days. 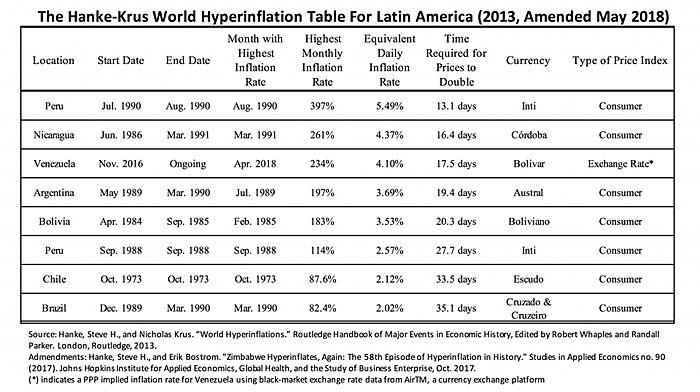