With the arrival of President Hugo Chávez in 1999, Venezuela embraced Chavismo, a form of Andean socialism. In 2013, Chávez met the Grim Reaper, and Nicolás Maduro assumed Chávez’ mantle.

The Grim Reaper has also taken scythe to the Venezuelan bolivar. The death of the bolivar is depicted in the following chart. A bolivar is worthless. 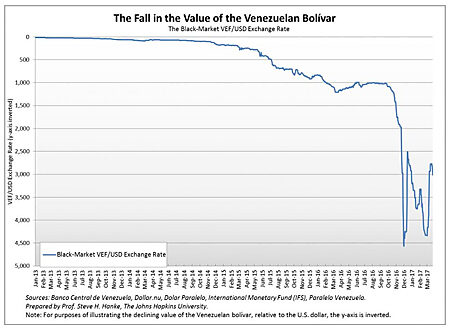 The fall in the value of the Venezuelan bolivar

With the collapse of a currency comes inflation. By the time President Nicolás Maduro arrived, inflation was in triple digits and rising.

It’s time for enlightened, practical politicians in Venezuela to embrace the dollarization idea. The public already does. 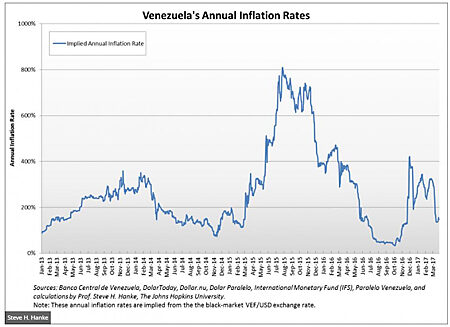 To stop Venezuela’s death spiral, it must dump the bolivar and adopt the greenback. This is called “dollarization.” It is a proven elixir. I know because I operated as a State Counselor in Montenegro when it dumped the worthless Yugoslav dinar in 1999 and replaced it with the Deutsche mark. I also watched the successful dollarization of Ecuador in 2001, when I was operating as an adviser to the Minister of Economy and Finance. 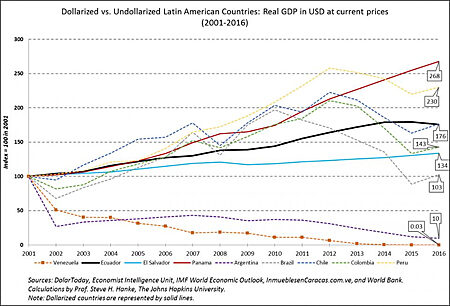 So, not all the news from Venezuela is grim. After all, there is a tried and true way to stabilize the economy, which is a necessary condition required before the massive task of life-giving reforms can begin. It is dollarization.

Just what does the Venezuelan public think of the dollarization idea? To answer that question, a professional survey of public opinion on the topic was recently conducted by Datincorp in Caracas. The results are encouraging. Sixty-two (62%) of the public favors dollarization. It's time for enlightened, practical politicians in Venezuela to embrace the dollarization idea. The public already does.