Skip to main content
Live Now
This article appeared on Rea​son​.com on May 17, 2016.
TOP

The news from Venezuela is not encouraging. Last Friday, CNN reports, President Nicolas Maduro declared a state of emergency in order “to tend to our country and more importantly to prepare to denounce, neutralize and overcome the external and foreign aggressions against our country.”

In truth, Maduro is trying to intimidate and silence the growing domestic opposition to his rule, which saw inflation balloon, shops empty and, according to The New York Times, hospitals fill with dying infants.

Like my Cato colleague David Boaz, I am a bit peeved when American leftists refer to people like Nicolas Maduro and Raul Castro of Cuba as “Presidents,” while referring to people like Alfredo Stroessner of Paraguay and Augusto Pinochet of Chile as “Dictators.” None of them were elected in free and fair elections, and they ought to be treated equally.

It is clear that 21st century socialism is not all that different from its 20th century predecessor.

More importantly, the causes of the human tragedy that is unfolding in Venezuela ought to be clearly identified and learned from. Predictably, CNN and The New York Times have laid the blame for Venezuela's economic meltdown at the door of the failing oil prices.

"Once the cornerstone of Venezuela's economy and the source of funding for many of Chavez' social programs," CNN reported, "global oil prices have plummeted, leaving Venezuela in dire financial straits — especially as much of the country's output is of lower quality."

"This nation has the largest oil reserves in the world," The New York Times wrote, "yet the government saved little money for hard times when oil prices were high. Now that prices have collapsed, the consequences are casting a destructive shadow across the country."

Ah, the vagaries of the oil market!

Yes, it is true that oil prices have come down, before rebounding somewhat, but many countries that are or have been heavily dependent on exports of natural resources have managed to avoid the kind of economic problems that Venezuela experiences.

What's missing from the picture painted by CNN and The New York Times is the gradual, but constant, erosion of economic freedom in Venezuela that has been going on at least since the 1970s. The rule of law has been undermined, private property confiscated and prices fixed by the state.

Venezuela would have run into trouble eventually anyway, since a succession of economically illiterate governments has destroyed the non-oil sectors of the economy. In 1998, one economist estimates, oil represented 77 percent of Venezuela's exports. In 2013, it amounted to 96 percent of that country's exports.

Contrast that with the performance of Chile. As Chile grew in economic freedom, it became less dependent on mining and exports of natural resources. Other parts of the Chilean economy, including agriculture and services, have blossomed. 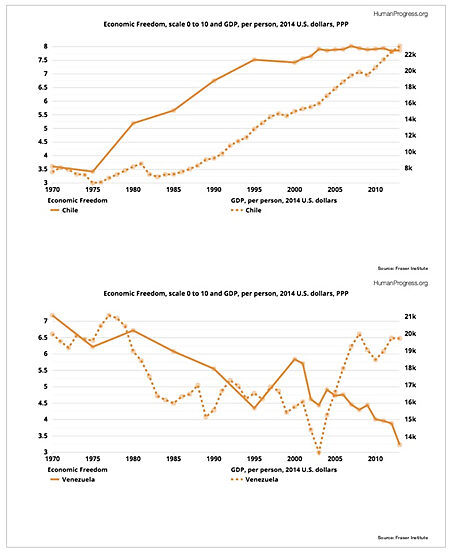