Stagnationists have been around for centuries. They have embraced many economic theories about what causes economic stagnation. That’s a situation in which total output, or output per capita, is constant, falling slightly, or rising sluggishly. Stagnation can also be characterized by a situation in which unemployment is chronic and growing.

Before we delve into the secular stagnation debate — a debate that has become a hot topic — a few words about current economic developments in the U.S. are in order. What was recently noticed was the Federal Reserve's increase, for the first time in nearly a decade, of the fed funds interest rate by 0.25 percent. What went unnoticed, but was perhaps more important, was that the money supply, broadly measured by the Center for Financial Stability's Divisia M4, jumped to a 4.6 percent year-over-year growth rate. This was the largest increase since May 2013. 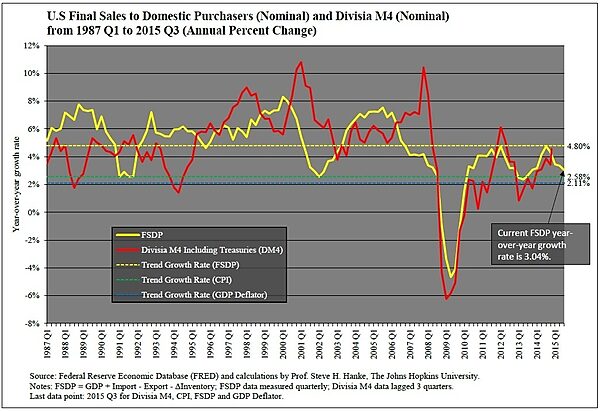 But what about the secular stagnation debate? The secular stagnation thesis in a Keynesian form was popularized by Harvard University economist Alvin Hansen. In his presidential address to the American Economic Association in 1938, he asserted that the U.S. was a mature economy that was stuck in a rut that it could not escape from. Hansen reasoned that technological innovations had come to an end; that the great American frontier (read: natural resources) was closed; and that population growth was stagnating. So, according to Hansen, investment opportunities would be scarce, and there would be nothing ahead except secular economic stagnation; unless, fiscal policy was used to boost investment via public works projects.

Hansen's economics were taken apart and discredited by many non-Keynesian economists. But, the scholarly death blow was dealt by George Terborgh in his 1945 classic The Bogey of Economic Maturity. In the real world, talk of stagnation in the U.S. ended abruptly with the post-World War II boom.

Secular stagnation in the U.S. is nothing more than a phony rationale for more government waste.

It is worth noting that many Keynesians were caught up, at least temporarily, in the secular stagnation fad. Even Paul Samuelson, a leader of the Keynesians — thanks, in part, to his popular textbook — was temporarily entrapped. But, like Houdini, he miraculously escaped. That said, there were things in Economics that Samuelson probably wished he had thrown overboard, too. My favorite from the 13th edition (1989) is: "The Soviet economy is proof that contrary to what many sceptics had earlier believed, a socialist command economy can function and even thrive."

Today, another Harvard University economist, Larry Summers, is beating the drums for secular stagnation. And Summers isn't just any Harvard economist. He was formerly the president of Harvard and a U.S. Treasury Secretary. Summers, like Hansen before him, argues that the government must step up to the plate and invest more to fill the gap left by deficiencies in private investment, so that the economy can be pulled out of its stagnation rut. He is preaching the stagnation gospel beyond the ivy-covered halls at Harvard. And, he is picking up followers. For example, Canada's new Prime Minister, Justin Trudeau, has latched onto Summers and the stagnation thesis. What better way to justify expanding government investments, or should we say white elephants?

For evidence to support Summers' secular stagnation argument and his calls for more government investment, he points to the anemic private domestic capital expenditures in the U.S. As the accompanying chart shows, gross private domestic business investment, which does not include residential housing investment, has rebounded modestly since the great recession. But, most of this gross investment has been eaten up in the course of replacing capital that has been used up or became obsolete. Indeed, the private capital consumption allowances shown in the chart are huge. While these capital consumption figures are approximate, they are large enough to suggest that there is little left for net private business investment. This means that the total capital stock, after actually shrinking in 2009, has grown very little since then. 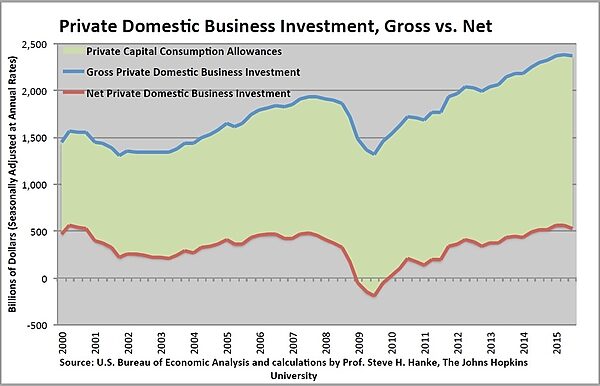 If we take a longer look, one starting in 1960, it appears that net private domestic investment as a percent of GDP has trended downward (see the accompanying chart). This is due to the fact that private capital consumption allowances as a percentage of GDP have trended upward. This shouldn't surprise us. With the increasingly rapid rate of innovation, obsolescence and, therefore, capital consumption have increased. On the surface, these facts appear to give the stagnationists a reed to lean on. But, it's a weak one. 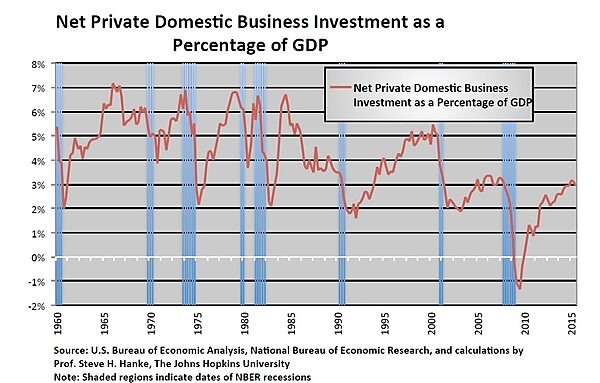 To understand the troubling net investment picture, we must ask why businesses are so reluctant to invest. After all, it's investment that fuels productivity and real economic growth. Are the stagnationists on to something? Have we really run out of attractive investment opportunities that require the government to step in and fill the void?

A recent book by Robert Higgs, Taking a Stand: Reflections on Life, Liberty, and the Economy, helps answer these questions. In 1997, Higgs first introduced the concept of "regime uncertainty" to explain the extraordinary duration of the Great Depression of the 1930s. Higgs' regime uncertainty is, in short, uncertainty about the course of economic policy — the rules of the game concerning taxes and regulations, for example. These rules of the game affect the net benefits and free cash flows investors derived from their property. Indeed, the rules affect the security of their property rights. So, when the degree of regime uncertainty increases, investors' risk-adjusted discount rates increase and their appetites for making investments diminish.

Since the Great Recession of 2009, regime uncertainty has been elevated. This has been measured by Scott R. Baker of Northwestern University, Nicholas Bloom of Stanford University and Steven J. Davis of the University of Chicago. Their "Economic Policy Uncertainty Index for the U.S.," which was published by the Cato Institute in Washington, D.C., measures, in one index number, Higgs' regime uncertainty. In addition, there is a mountain of other evidence that confirms the ratcheting up of regime uncertainty during the tenure of the George W. Bush and Barack Obama administrations. For example, a recent Pew Research Center survey finds that the percent of the public that trusts Washington, D.C. to do the right thing has fallen to all-time lows of around 20 percent.

So, contrary to the stagnationists' assertions, the government is the problem, not the solution. Secular stagnation in the U.S. is just what it was when Alvin Hansen popularized it in the 1930s: Its bunk. Nothing more than a phony rationale for more government waste.