Since the election of Hugo Chavez in December of 1998, Venezuelans have embraced Chavismo. This peculiar form of socialism has allowed Venezuela to morph into what is in essence an organized crime syndicate and has pushed the country in an economic death spiral. For the stunning evidence of this death spiral, we need look no further than Venezuela’s inflation rate.

Today, Venezuela's annual inflation rate is 112,189%/yr. The chart below tracks the daily measurements of this annual rate. Unlike the fantastic inflation forecasts thrown around by the International Monetary Fund (IMF), the data in the chart are real measurements—accurate measurements. 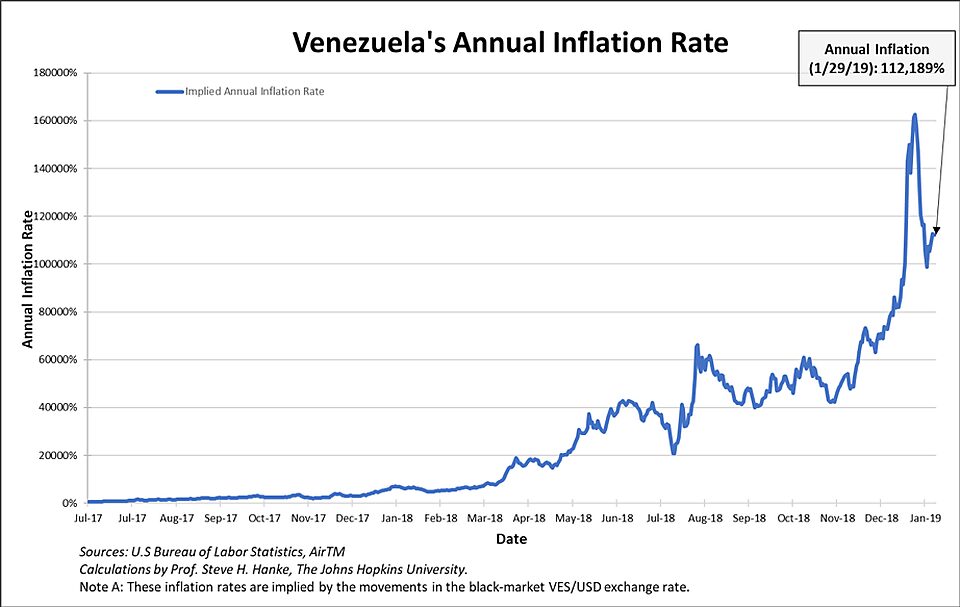 For some time now, the United States has been using Venezuela's vulnerabilities to engage in a low-grade economic war. Instead of military action, the U.S. has imposed selected economic sanctions against certain Venezuelans. These have amounted to slaps on the wrist, with threats of worse to come. But, as of January 28, 2019, the U.S. has declared a full-scale economic assault. Indeed, it declared an embargo against Petróleos de Venezuela (PDVSA)—the country's state-owned oil company that controls the world's largest oil reserves and produces virtually all of Venezuela's foreign exchange.

This move shouldn't surprise us. In a fundamental sense, economic warfare is nothing more than protectionism, a doctrine that is near and dear to the heart of President Trump and his administration. The measures taken under the protections flag are often precisely the same as those employed under the economic warfare flag. Both, of course, fly in the face of free trade, which lies at the root of free-market capitalism.

At the same time that Washington declared economic war, Caracas announced that it was going to devalue its currency, the bolivar, in an attempt to allow its value to align with that in the black-market (read: free market). As the accompanying chart shows, the official bolivar/U.S. dollar exchange rate plunged, and shot past the black-market rate. This realignment of the official and black-market exchange rates carries with it significant implications. 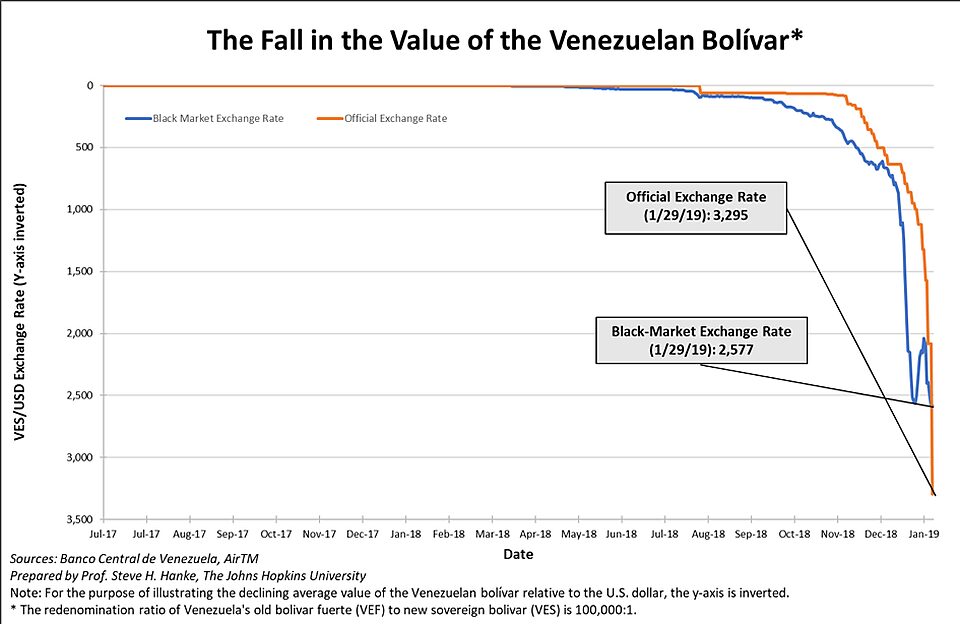 The black-market premium (BPM) is a convenient metric that allows us to understand the importance and relationship between the official and black-market exchange rates.

The following chart shows the course of the BMP since November 2018. For all of the dates, except today's, the BMP has registered positive. This means that Venezuelans were willing to pay a premium for U.S. dollars on the black-market, in contrast to those who were lucky enough (read: privileged enough) to obtain them at the official rate.

For the privileged, Maduro's cronies and regime insiders, the premium meant that they could buy dollars "cheap" at the official rate and immediately sell their greenbacks "dear" on the black-market. In the process, they would pocket the black-market premiums. By keeping the official rate set so that the bolivar was artificially overvalued via controls, the Maduro regime could restrict access to the Venezuela's foreign exchange reserves and dole them out to friends, guaranteeing massive profits at no risk.

But, the largess for loyalists has dramatically dried up. Indeed, the BMP has turned negative. What does this unusual negative BMP mean? Well, it implies that market participants expect the bolivar to appreciate relative to the greenback, and that individuals are willing to pay a premium to obtain bolivars on the black-market. This indicates that those in the market, at least for today, expect the Grim Reaper to put an end to Chavismo and Venezuela's death spiral.