Secular stagnation is said to be present when economic growth is negligible or nonexistent over a considerable span of time. Today, secular stagnation has become a popular mantra of the chattering classes, particularly in the United States. The idea is not new, however.

Alvin Hansen, an early and prominent Keynesian economist at Harvard University, popularized the notion of secular stagnation in the 1930s. In his presidential address to the American Economic Association in 1938, he asserted that the U.S. was a mature economy that was stuck in a rut. Hansen reasoned that technological innovations had come to an end; that the great American frontier (read: natural resources) was closed; and that population growth was stagnating. So, according to Hansen, investment opportunities would be scarce, and there would be nothing ahead except secular economic stagnation. The only way out was more government spending. It would be used to boost investment via public works projects. For Hansen and the Keynesians of that era, stagnation was a symptom of market failure, and the antidote was government largesse.

Hansen’s economics were taken apart and discredited by many non-Keynesian economists. But, the scholarly death blow was dealt by George Terborgh in his 1945 classic The Bogey of Economic Maturity. In the real world, talk of stagnation in the U.S. ended abruptly with the post-World War II boom.

Today, another Harvard economist, Larry Summers, is leading what has become a secular stagnation bandwagon. And Summers isn’t just any Harvard economist. He was formerly the president of Harvard and a U.S. Treasury Secretary. Summers, like Hansen before him, argues that the government must step up to the plate and invest in infrastructure to fill the gap left by deficiencies in private investment. This, he and his fellow travelers argue, will pull the economy out of its stagnation rut.

The secular stagnation story has picked up a blue-ribbon array of establishment voices. They all preach the same gospel: the free-market system is failing (read: stagnating). Only government infrastructure investment can save the day. President Obama’s Council of Economic Advisers devotes an entire chapter in its 2016 Annual Report to “The Economic Benefits of Investing in U.S. Infrastructure.” And the President’s advisers have plenty of company at the Federal Reserve. Both the Fed’s Chairwoman Janet Yellen and Vice Chairman Stanley Fischer have recently called for more government investment in infrastructure as a way out of the U.S. stagnation rut. The list of notable adherents to the secular stagnation story seems to grow with each passing day.

The adherents come from all sides of the political spectrum, including the two major candidates for the U.S. Presidency: Hillary Clinton and Donald Trump. Clinton, for example, calls the need to upgrade the nation’s infrastructure a “national emergency” — one she proposes to solve with a mega-government infrastructure investment program. Indeed, Clinton’s plans would probably run up a bill that would exceed President Obama’s proposed $478 billion infrastructure program — a program that Congress repeatedly rejected.

And then there is Donald Trump. While short on specifics, a principle Trump call to arms centers on the renewal of America’s aging infrastructure. So, when it comes to the issue of secular stagnation and its elixir, Clinton and Trump share common ground.

Now, let’s take a careful look at the story that has captured the imagination of so many influential members of the establishment. For evidence to support Summers’ secular stagnation argument and his calls for more government investment, he points to anemic private domestic capital expenditures in the U.S. As the accompanying chart shows, net private domestic business investment (gross investment – capital consumption) is relatively weak and has been on a downward course since 2000. 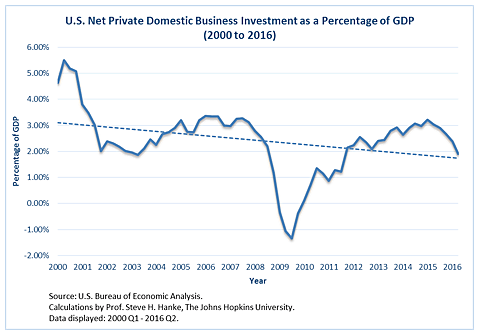 Investment is what fuels productivity. So, with little fuel, we should expect weak productivity numbers in the U.S. Sure enough, as shown in the accompanying chart, the rate of growth in productivity is weak and has been trending downward. Indeed, the U.S. is in the grips of the longest slide in productivity growth since the late 1970s. This is alarming because productivity is a key ingredient in determining wages, prices, and economic output. 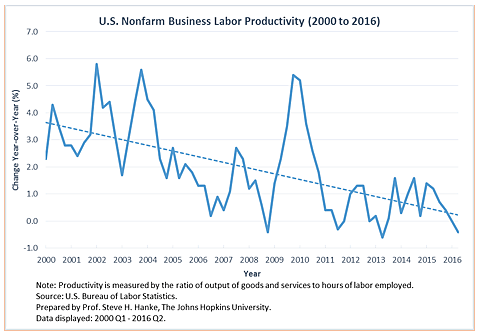 When we move to aggregate demand in the economy, which is measured by final sales to domestic purchasers, it is clear that the U.S. is in the midst of a growth recession. Aggregate demand, measured in nominal terms, is growing (2.93%), but it is growing at well below its trend rate of 4.75%. And that below-trend growth in nominal aggregate demand has characterized the U.S. economy for a decade. To put this weak growth into context, there has only been one other recovery from a recession since 1870 that has been as weak as the current one: the Great Depression. 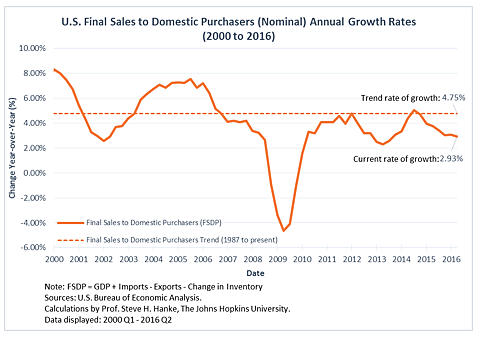 Roosevelt and Congress, especially during the congressional sessions of 1933 and 1935, embraced interventionist policies on a wide front. With its bewildering, incoherent mass of new expenditures, taxes, subsidies, regulations, and direct government participation in productive activities, the New Deal created so much confusion, fear, uncertainty, and hostility among businessmen and investors that private investment and hence overall private economic activity never recovered enough to restore the high levels of production and employment enjoyed during the 1920s.

In the face of the interventionist onslaught, the U.S. economy between 1930 and 1940 failed to add anything to its capital stock: net private investment for that eleven‐​year period totaled minus $3.1 billion. Without ongoing capital accumulation, no economy can grow .…

Higgs’ evidence demonstrates that investment was depressed by New Deal initiatives because of regime uncertainty. In short, investors were afraid to commit funds to new projects because they didn’t know what President Roosevelt and the New Dealers would do next.

Moving from the Great Depression to today’s Great Recession, we find a mirror image. President Obama, like President Roosevelt, has created a great deal of regime uncertainty with his propensity to use the powers of the Presidency to generate a plethora of new regulations without congressional approval. In a long report, the New York Times of August 14th went so far as to hang the epithet of “Regulator in Chief” around Obama’s neck. What a legacy.