Skip to main content
Live Now
This article appeared on Education Next on July 19, 2017.
TOP

When the first random‐​assignment study ever to find a negative effect from a voucher program was released more than two years ago, a debate broke out over what role, if any, the Louisiana Scholarship Program’s regulations played. Some argued that Louisiana’s onerous regulatory environment — particularly its open admissions requirement and state test mandate — drove away better‐​performing private schools from participating in the program. Others dismissed such claims, arguing instead that such regulations were necessary to guarantee quality in the long run.

The debate has reignited with last month’s release of the third year LSP reports, which found no statistically significant difference between voucher students and the control group. Louisiana’s superintendent of education, John White, argued that the results proved that concerns about over‐​regulation were unfounded. Whereas “conservative ideologues paraded around the idea that regulation is somehow anathema to choice, and is driving away the elite schools that otherwise would have magically served these kids better than the schools that participated,” White argued that instead, “it may very well be the regulation itself — the accountability system — that is the thing that has promoted the performance.”

In fact, the available evidence suggests that regulations did indeed drive away higher‐​performing private schools. One of the three reports released by the School Choice Demonstration Project at the University of Arkansas addresses exactly this question.

These findings strongly suggest that more onerous regulations are more likely to drive away better schools.

The theory is rooted in basic economics. Private school leaders decide whether to partake in a given voucher program based on the costs and benefits associated with participation. The benefit comes from additional funding which is limited in Louisiana to a maximum of 20 percent of total enrollment for private schools that have been in operation for under two years. The costs associated with participation come in the form of red tape. Participating private schools in Louisiana must administer the state standardized test, prohibit parental copay for families using vouchers, report finances to the government, and surrender their admissions process over to the state. As an American Enterprise Institute survey found, private schools are concerned that such regulations could threaten their character or identity, would force them to change what and how they teach, and bog them down in paperwork. In other words, they feared that the regulations would hamper their ability to carry out their educational missions.

If the expected benefits exceed the expected costs, a given private school will participate in the program. The types of schools that will be more likely to find additional benefits in excess of additional costs are the ones that value financial resources more than a loss of autonomy. Of course, schools desperate for enrollment and funding will have a stronger incentive to accept the state requirements. Indeed, if a school is about to close down due to financial constraints, it would likely choose to participate regardless of the magnitude of the costs.

Consequently, we expected to find the strongest negative association between quality and participation in the most-regulated program: Louisiana.

As shown in Figure 1 below, we observed that only a third of eligible private schools in the state decided to participate in the LSP, while between 70 and 78 percent participated in D.C. and Indiana. This follows intuition, as the regulatory costs are the highest in the LSP. 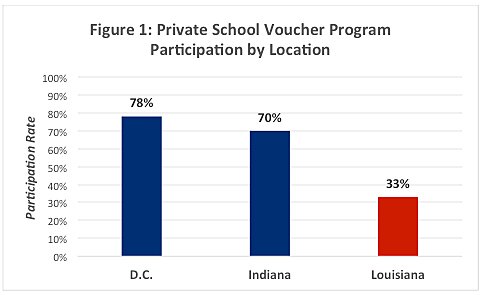 In our main analyses, we used enrollment and tuition levels as proxies for school quality. Economists would view tuition level as the price of schooling and enrollment as the quantity demanded. These two measures are the strongest measures of quality that exist, as they capture the sum of all of the quality-based decisions of individual parents.

If we believe price to be the most informative measure, we would not want to control for anything in the analysis. Such an analysis produces the expected result: higher quality private schools are the least likely to participate in highly regulated voucher environments.

As shown in Figure 2 below, a one-thousand dollar increase in tuition level is associated with a 3.5-percentage point decrease in the likelihood of participating in the LSP. The association is not statistically different from zero for Indiana, the least regulated program, and is only marginally significant in D.C. 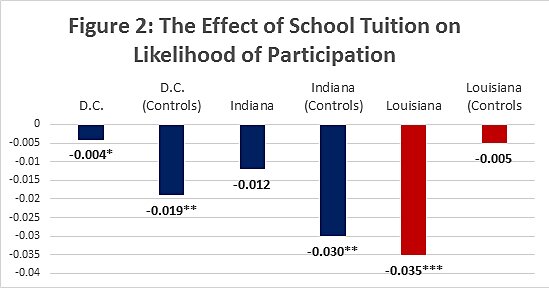 When we controlled for factors such as school racial composition, grades served, and religiosity, the coefficient on tuition became insignificant in Louisiana, but remained highly significant for the enrollment measure. As shown in Table 5 from the original report — a 100 student increase in enrollment was associated with a 28-percent decrease in the likelihood of participation in the LSP. The enrollment coefficient was not statistically different from zero for D.C. or Indiana. 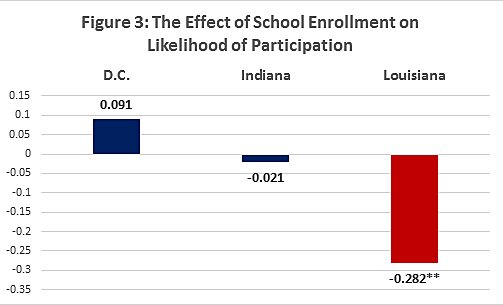 These findings strongly suggest that more onerous regulations are more likely to drive away better schools. Researchers and policymakers should take them into account when considering what sort of regulatory environment to construct for school choice policies.

Even well-intended policies can produce negative consequences. White and others like him no doubt have noble intentions when they support imposing regulations on private schools. They want to make it impossible, or at least very difficult, for disadvantaged families to make bad choices. It remains possible that the regulation-heavy approach they prefer will lead over time to quality improvements among private schools that decide to participate in choice programs. However, our research suggests that the same regulations can also reduce the quality of educational options available to children in need by leading some schools not to participate at all.