Skip to main content
Live Now
This article appeared on The Hill (Online) on November 2, 2016.
TOP

Peter Thiel is mad as hell and he’s not going to take it anymore. That’s the distillable substance of an unusual speech given by the billionaire, libertarian entrepreneur at the National Press Club on Monday, in which he tried to rationalize his support for Donald Trump.

Thiel made some valid points and indulged the audience in some fallacies before it became clear that his disdain for the status quo and its elite establishment guardians has blinded him to the possibility that change isn’t always for the better.

Describing the failures of an establishment that is responsible for creating the environment where support for an “outsider” like Trump could be sown, Thiel offered some depressing — if not hyperbolized — facts and opinions about typical American life.

Baby-boomers are retiring in droves, but 64 percent of people over the age of 55 have less than one year of savings to their names.

The cost of healthcare to America’s aging population is overpriced and continuing to rise.

College tuition is out of control and young Americans have accumulated $1.3 trillion of student debt. Real incomes have stagnated to the point where the median household makes less than it did 17 years ago.

Millennials will be the first generation to have lower living standards than their parents. Despite all of these domestic problems, current and future U.S. taxpayers have spent trillions on foreign wars, five of which we are still fighting today. 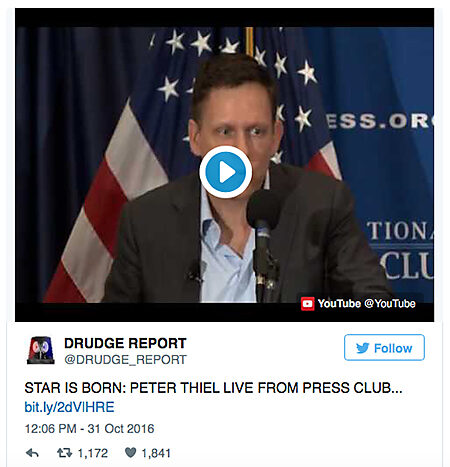 No doubt these are some valid indictments of U.S. policymaking that reflect poorly on the status quo. But Thiel doesn’t discuss how Trump would remedy these problems, presumably because Trump hasn’t articulated any policy prescriptions in these areas — except to say that he would “bomb the shit out of ISIS,” permit torture on a scale “much tougher” than waterboarding, as well as target and kill the families of suspected ISIS fighters ("When you get these terrorists you have to take out their families").

What seems to matter to Thiel, a “libertarian,” is not that Trump upholds the Constitution or that his policies are pro-market or pro-liberty or non-coercive, but that these examples of a nation mismanaged are all indictments of the status quo, so let’s move on — even if that means moving on to something illiberal, even authoritarian.

Surprisingly, Thiel seems to buy into Trump’s nationalist depiction of trade, where exports are Team America’s points; imports are the foreign team’s points; the trade account is the scoreboard; and the deficit on that scoreboard means that the United States is losing at trade.

Trump and Thiel see U.S. manufacturing as a casualty of trade, but the fact remains that the manufacturing sector is thriving in every relevant metric. U.S. factories produced $2.2 trillion of output last year, which is six-times greater in real terms than the $110 billion of output produced by U.S. factories in 1953, when the sector was a real driver of the U.S. economy, accounting for over 28 percent of GDP.

The evidence is so overwhelming that Trump’s trade rhetoric is fallacious that one is inclined to chalk it up to willful ignorance that Thiel chooses to accept the lies.

For most libertarians, Trump’s views on trade, immigration, the Constitution, and his questioning of the First Amendment — to pick a few — disqualify him from consideration. Thiel’s cavalier attitude toward the whole question of “what comes next?” suggests an impulsiveness that speaks to a deeper flaw.

Impulsiveness is a hallmark of immaturity and the antithesis of rational thought. Perhaps in Thiel’s case it reflects his deep aversion to conformity.

Thiel protests the intolerance of dissent among the beautiful people living in bubbles in Washington and San Francisco, oblivious to this menacing reality that may be gripping the country.

There is plenty of evidence to suggest that there are places where political correctness prevails and dissenting views are not tolerated. Indeed, that is a common refrain from the culture wars. But we — and by we I mean Thiel — must recognize the distinction between intolerance of dissent and intolerance of poisonous ideas.

In rationalizing his support for Trump and leaving the future to chance, Thiel dissolves that distinction.