Skip to main content
Live Now
This article appeared on The 74 Million on February 5, 2018.
TOP

President Donald Trump’s State of the Union address touched on most of what was expected: making America great again, trade, immigration, and tax cuts. But despite his focus on education reform during the election, Trump did not even mention federal funding reallocations or a federal tax‐​credit scholarship program enabling school choice all across the nation.

Staunch supporters of school choice got really excited during the 2016 presidential campaign when candidate Trump promised to fight for school choice and even mentioned reallocating $20 billion in federal funds to the cause. After all, they believed they would have the enormous power of the federal government backing school choice vocally and financially. I was excited as well. Children across the entire country could have access to school choice almost instantly!

But that excitement did not last long. It eroded quickly — and then turned into major concern.

Federal involvement may sound great when those in power completely agree with your preferred education model. But there is no telling who will hold that same power over the entire system tomorrow. Federal education dollars are public, so government officials could decide that all voucher-accepting schools must do the same things public schools do — and autonomous private schools primarily serving voucher-using students would have a huge financial incentive to accept a hefty package of regulations. After all, failing to do so could force them to shut down, throwing many disadvantaged children out onto the street.

This fear is not theoretical. A few recent data-driven studies suggest that regulated school choice could actually make us worse off.

The first evaluation of an experimental school voucher program to find negative effects on student achievement was in Louisiana — the first such program in the country and one of the most regulated in existence. In order to participate in the Louisiana Scholarship Program, private schools must administer standardized tests, accept the voucher funding amount as full payment, and surrender their admissions processes to the state. 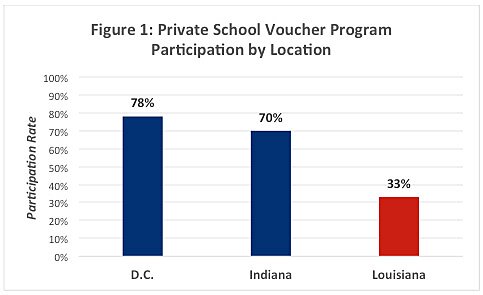 Of course, life is about weighing costs and benefits, and school choice policy is no different. A government program can have the benefit of quickly granting more options in the short run — but the accompanying federal control can reduce private school autonomy in the long run, which is a major cost.

Federal school choice can look awfully enticing to those who have been historically deprived of education options. But as with many other areas of life, short-term gain can lead to dire long-term consequences.