Despite Donald Trump’s “America first” campaign‐​trail calls for the United States to pull back from the Middle East; his statement — less than two weeks ago — that he was ready to pack up and go home from Syria “very soon”; his 2013 tweets, directed at former president Barack Obama, saying, “I would not go into Syria, but if I did, it would be by surprise and not blurted all over the media,” it looks increasingly likely that, as he did a year ago, President Trump will strike militarily in Syria in response to last week’s reports of Bashar al-Assad’s regime killing civilians with chemical weapons. Wednesday morning, in a tweet “blurted all over the media,” Trump said: 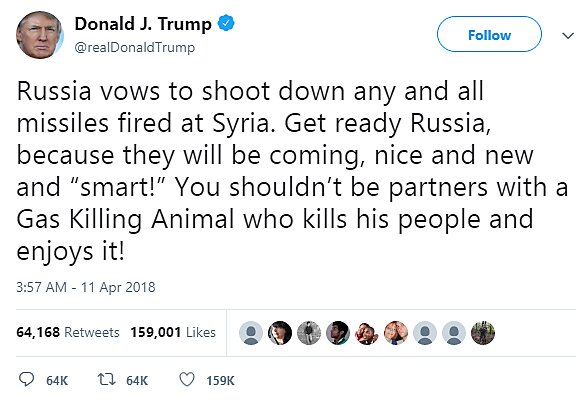 No one should be surprised.

Because regardless of past statements, and whether he pulls the trigger again, the Syria missile strike was one of the few things he’s done that garnered bipartisan praise from the Washington establishment. Notwithstanding his frequent screeds directed at the mainstream media and the Beltway class, it’s their praise that he really craves.

Trump routinely expresses dismay that the press isn’t nice to him and complains he doesn’t get credit for his accomplishments. It’s of a piece with his oft-chronicled lifelong quest to convert his outer-borough pedigree to approval from tony Manhattan elites. Throughout his time in office he’s rarely won plaudits from establishment Republicans, and almost never from Democrats. But Syria has been an exception.

Former Secretary of State John F. Kerry was “absolutely supportive” of the 2017 strikes. Sen. John McCain (R-Ariz.) said Trump “confronted a pivotal moment in Syria and took action,” and “For that, he deserves the support of the American people.” Even Sen. Tim Kaine (D-Va.), who has repeatedly pushed for Congress to reassert control over its constitutional war-making authority, said “from a moral standpoint” the 2017 strikes were “the right thing to do.” Political scientist Ian Bremmer’s tweet at the time summed up the consensus pretty well: 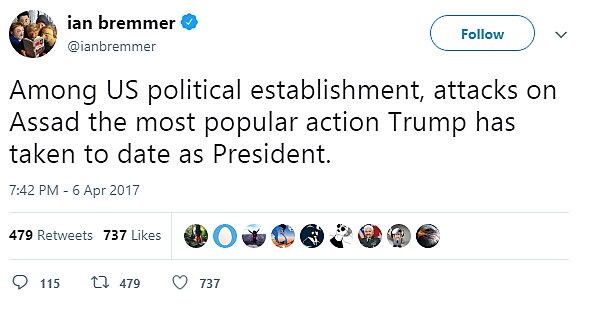 Though he still nods rhetorically to the idea of a less interventionist foreign policy, Trump doesn’t appear to have needed much coaxing to ratchet up his talk of additional military action. Having just installed the ultimate hawk in new national security adviser John Bolton and chemical attacks again providing him an opportunity to act “presidential,” Trump is once again tilting toward a resort to unwarranted force, for all the wrong reasons.

The 2017 strike had no utility beyond bolstering the perception that America (read: Trump) was projecting strength. Recent military gains against the Islamic State were achieved separately. The strike did not meaningfully change the battlefield realities of the Syrian civil war or reverse the Assad regime’s gains. Indeed, in the last year, the Assad regime consolidated its position, if not outright “winning” the conflict, all but assuring it will survive it. And strikes didn’t achieve their purported humanitarian objective: the regime continues to use violence against its own citizens.

The strike did give a short-term boost to Trump’s domestic stature and reinforce America’s status as the world’s policeman. As Walter Russell Mead wrote at the time, “The strikes vindicated America’s prestige and dealt a clear setback to those who seek to humiliate or marginalize the U.S.”

It’s an argument that prestige is, itself, an interest worth using military power to maintain. It’s not new. America’s position atop the international hierarchy has long made the United States obsessed with its status. A status-driven foreign policy makes us more likely to pursue military intervention for the sake of peripheral interests and nonmaterial gains. As Tufts University’s Jeffrey W. Taliaferro argues, “the aversion of senior officials to perceived losses — in terms of their state’s relative power, international status, or prestige — drives great power intervention in peripheral regions.” It makes us reluctant to forfeit our global leadership role, even if it doesn’t serve our core national interests.

The last few decades of the oft-cited “unipolar moment,” when Americans had no peer competitors and thought we could remake the world in our image, have been particularly influenced by a dubious maintenance of status. It’s led to an activist foreign policy that has, on balance, not paid dividends: We’ve been at war for most of the post-Cold War era, a period in which we’ve spent almost $15 trillion on the military. We’ve engaged in more military interventions since 1989 than in the preceding nearly two centuries. This activism has cost us a great deal of blood and treasure, and, as I recently argued in The Washington Quarterly, it has eroded constitutional checks and balances on war powers, incentivized government secrecy and led to infringements on civil liberties in the name of security. But American security and international stability have been accomplished in spite of this interventionism, not because of it.

According to diplomat James B. Foley, “public support for U.S. global leadership has been sustained by a romantic faith in America’s overseas mission — a kind of internationalized Manifest Destiny” that makes any suggestion of retrenchment “psychologically deflating.” But as the University of Washington’s Jonathan Mercer explains, this sense of status and prestige has “neither strategic nor intrinsic value.”

Vietnam was a case in point. The public message for the necessity of U.S. involvement emphasized security justifications, like preventing falling dominoes, and normative justifications, like ensuring a better, freer way of life for the Vietnamese people. If Vietnam fell to the communists, President Lyndon B. Johnson asked in 1965, “what is going to happen to all the other little nations? So somebody must stand there and try to help the little nations protect themselves from the nations who would provoke aggression.” But by 1964, Assistant Secretary of Defense John McNaughton and Assistant Secretary of State William Bundy had already acknowledged privately that America’s “international prestige” was what was most “directly at risk.” A draft of a 1965 internal Defense Department memo described U.S. aims in Vietnam as “70% — to avoid a humiliating U.S. defeat.” To avoid, in other words, loss of prestige.

A similar dynamic drives policy in Afghanistan today. In October, the Trump administration announced a plan to surge up to 4,000 additional troops at an added cost of about $1 billion per year, without a new strategy to overcome that war’s long-standing stalemate. Laurel Miller, who was a State Department special representative for Afghanistan and Pakistan until June 2017, told Politico a month after her departure, “I don’t think there is any serious analyst of the situation in Afghanistan who believes that the war is winnable.” Fifteen years on, the rationale for staying the course is that withdrawal would allow Afghanistan to become a terrorist haven, but scholars have long criticized this as the “safe haven myth.” It’s hard to see the motivation for the policy as separate from a desire to avoid the blow to prestige that would result from the potential collapse of the Kabul-based government we’ve backed.

Contrary to predictions that he would retreat from the world, Trump has proved either unable or unwilling to tame America’s activist foreign policy. His strain of America-first nationalism extols martial primacy — a misplaced faith in generals as decision-makers — and lends itself to lofty, imprudent declarations, like the one he offered in Warsaw last year, when he said America is in a fight for the “defense of civilization itself.”

Trump now signals that he will again attack “Animal Assad”, with the putative rationale that a strike, if it comes, would be a reckoning for the “Many dead, including women and children, in mindless CHEMICAL attack,” articulated, per usual, via tweet. Behind the threat is the assertion that American military power, will once again be used to stand up a nebulous sense that we control the global order.

Perhaps that’s an effective way for the president to flatter Americans’ inflated self-image, and boost his own ego, but it won’t tangibly enhance American interests. And probably won’t spare the Syrian people.